Looking at our travel photos, I realised we had eaten our way through Hanoi in four short days. Besides the local fare that I had already blogged about, we managed to seek out some highly recommended food establishments as well. 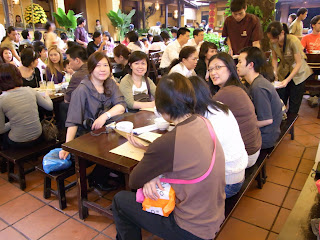 The beauty of traveling with a group of like-minded friends is getting to see more, do more and eat more. It helps that everyone is easy going by nature. There wasn't a single disagreement amongst us throughout the trip.

Typically after spending hours pounding the pavement, we end up in a cosy cafe for a cuppa. Vanille was the first one we went into. Its chic and tastefully decorated interior won our hearts. 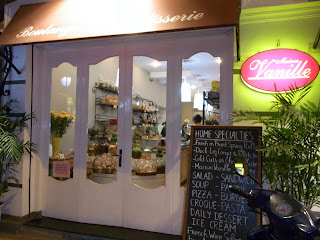 More importantly, the desserts and drinks warmed our soul too. My cup of full-bodied Vietnamese coffee topped with luscious cream really hit the spot. 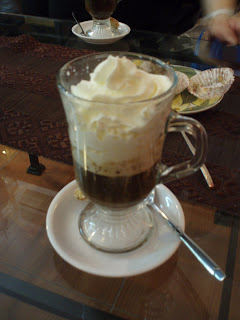 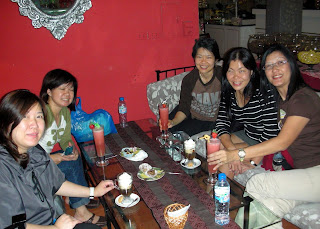 We were so impressed with Vanille's Opera Cake that we bought a whole mango cheesecake for our joint birthday celebration at night. 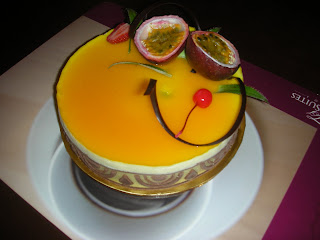 Walking back to the apartment, I spotted a rotisserie across the road and suggested dining at home. After a long day, everyone was too tired to protest. I dashed over to get a hot roasted chicken while the rest shopped for baguette, salad ingredients and a bottle of sparkling rose wine. 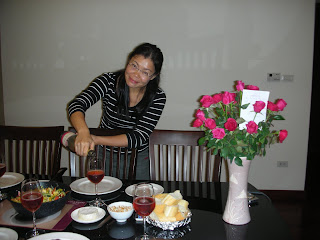 I rustled up a simple salad using capsicum, apple, cucumber, carrot and feta cheese while the girls set the table. 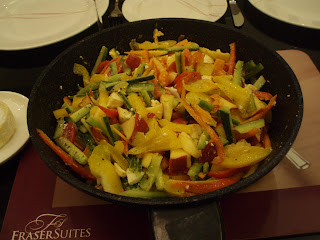 We drank to friendship, good health and more vacations to come. A night like this will be remembered for life. 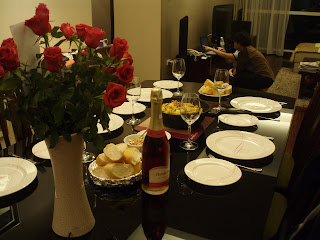 The mango cheesecake did not disappoint. It was moist and tangy, without being cloyingly sweet or overly rich. We're lucky to have found a gem of a bakery right outside our doorstep. 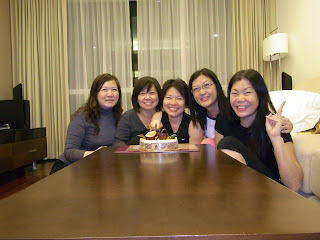 On Sunday morning, we traveled all the way to My Dinh Stadium for the HIWC's 18th Annual Festival Charity Bazaar. Organised by the expat community, there were 34 participating countries, 23 charity organisations and over 20 shops plying their ware. 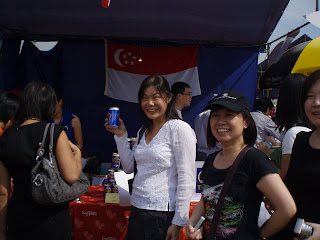 We found the Singapore stand where I promptly showed my support by getting a Tiger beer. 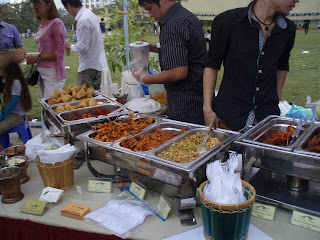 My friends were drawn to the aroma from the Indian stand. 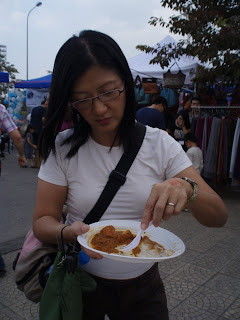 The spicy food was too irrestible. Here's Viv tucking into Indian curry.

Since the stadium is in the outskirts, we decided to stop by a new shopping mall nearby for lunch. Unfortunately, the Garden mall was too new and occupancy was still low. The operators at the foodcourt were still learning the ropes, hence service and food quality left much to be desired. We ordered Korean food and wished we were back in the bustling city instead.

We made a quick exit after lunch. After spending hours shopping in the heart of Hanoi, we stepped into Moca Cafe. Situated in the hippiest part of Hanoi city, Moca Cafe is the Vietnamese answer to Starbucks. Backpackers spend hours surfing or reading in the comfy cafe.

The coffee was strong and fragrant, giving us renewed energy to continue shopping till dinner.

That night, we treated ourselves to dinner at The Green Tangerine, the finest French restaurant in the city. Situated in a lovingly restored 1928 colonial in the center of the Old Quarter, the restaurant offers a menu of rich, delicious French fare.

When we stepped into the dimly lit restaurant, it was quiet save for few expats. The set dinner offered a choice of pumpkin soup or salad as entre, beef or duck for the main meal and chocolate cake and ice cream for dessert. Given the artistic presentations and high standards of cooking, we highly recommend the restaurant to foodies. Prices are reasonable too. 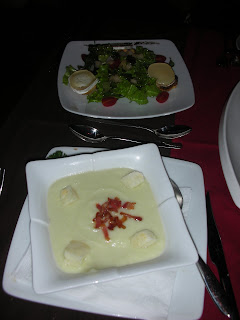 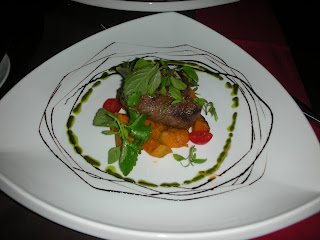 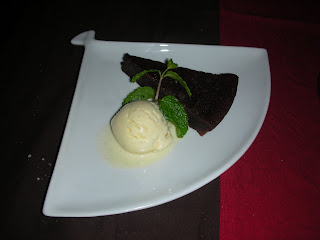 While we had an enjoyable experience at The Blue Tangerine, dinner at Da Lien the following night left a bad taste in the mouth. For some reason, the lady waitress attending to us was particularly unfriendly towards us. While she was all smiles serving others (mostly Caucasians), she was literally growling at us all night. 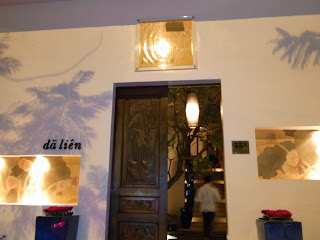 As a result, we weren't in the mood to take any food photos. It is a pity because Da Lian has such a lovely ambience, starting from the entrance and open courtyard to the spiral staircase leading to the dining area. I can't quite remember what we ate though we didn't forget to take some photos before heading out the door. 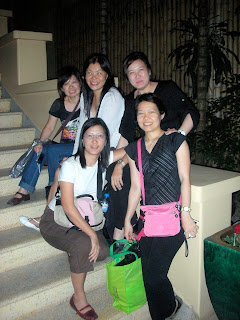 We chided ourselves for not dressing to the nines. Our original plan to return home to change into nice dresses was thwarted by the horrendous traffic congestion in the evening.

Hence the next day, we were determined to look our best for dinner. After checking out an Italian Restaurant (too casual) and the acclaimed Bobby Chin Restaurant (nice but fully booked), we settled for a newly opened Japanese restaurant.

Being the first customers, we were their guinea pigs. They were undergoing teething problems and we were there to experience it for ourselves. The waitresses couldn't understand us despite trying their best. It took a long while to get our orders sorted out. The food that arrived didn't impress either.

Poor Len was running a fever and on the verge of dozing off, yet her food didn't arrive. They had forgotten her order.

While the food was forgettable and the service unremarkable, at least we were dressed in our best. 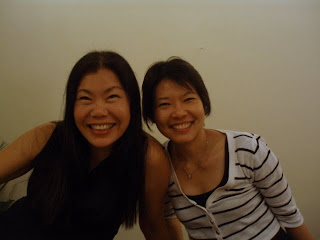 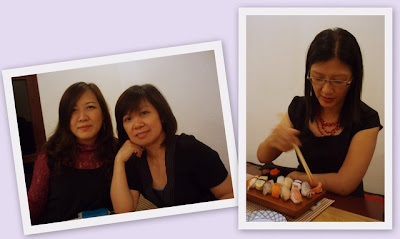 Gd company is all that matters! Glad you've enjoyed the lovely getaway, short but surely a cherished one. =)

ditto! and a group of girls no less! i'm glad to see u all enjoy w/o showing claws.

I can feel the fun just by looking at the pictures :D

Look at all of you smiling so brightly in the photos. Great friendships you have there.

Fr 4 to travel 2gether and not to have a x-word: you all r remarkably tolerant and deserve a medal!

Hotel wise: where did u stay to have all the table settings etc when u decided to eat in? The times I've done so, it was always so makeshift!

Huier - It was very memorable!

Fry - Indeed! What a coincidence!

Nick - You should try it sometime. With your male friends that is...

Auntie Lucia - My friend lives in Frasers Suites serviced apartments which is managed by F&N. It's fantastic, even better and bigger than my own apartment!