It began with a little sniffle on Sunday. He appeared fine on Monday morning. I touched his forehead and didn't detect any fever, so I sent him to school.

He called in the late morning. His teacher caught him coughing and wanted him to see a doctor. When we arrived at the clinic, it was so full that we had to wait outside. I decided to bring him home and return later.

Despite taking Panadol for fever, his temperature soared to 38 degree Celcius. The doctor had every reason to suspect he is infected with H1N1 and prescribed Tamiflu and a bunch of pills.

SK is now on medical leave and I'm on home quarantine for the next few days. The virus is highly infectious and everyone in the family is at risk. The timing is just bad. Both the kids are having exams next week and I'm trying to get SK to do some revision in between naps.

My auto-cleaning mode kicked in as soon as we got home. I started disinfecting the towels, door knobs and table tops with Dettol. I banned the poor kid from cuddling Rusty or leaving his room.

In my enthusiasm to disinfect his clothes, I poured so much Dettol and detergent into the washer that soap suds were spilling out from its soap dispenser. 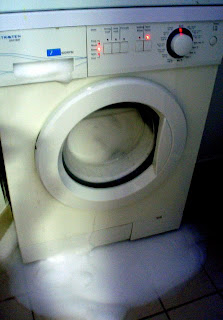 With so many cases of H1N1 (one in every 2 flu cases) in Singapore, it is only a matter of time before one of us gets it. YK's best friend was down with it over the weekend. My brother's entire family was also infected with a similar strain.

It's best that I stay away from my parents for the time being. Meanwhile, I hope that SK will recover quickly and life can go back to normal.
Posted by Blur Ting at 18:52

My little nephew was down with common flu but was given Tamiflu from the doctor as a preamptive strike!

Lot's of water and rest will probably do the trick!

Karen - Yah, the doc says Tamiflu will make him heal in 2 days. Otherwise, he should recover in about 4 days.

Let me know if you need any despatch service...eg liang cha, perhaps?

OH NO! Hope it is nothing serious! Get well soon.... to everyone in the family... isn't it weird that dogs don't get these things???

Huier - Thanks! That's so sweet of you. I've got barley boiling in the pot now:-)

Hi JY! Thank goodness it is not serious. He's just coughing and sniffing. My head is beginning to feel heavy today though.

Dogs get their own strains of flu. Once Rusty had a fever and doc said it was flu. He was given antibiotics and fever meds. Just like a human :-)

Hope he gets well soon. Both my boys came down with fever a week ago and after taking them to the docs, thank god they're on the road to recovery now ...

Don't be shy hah...btw, do rem to throw in some sugared wintermelons for extra boost.

Nick - Oh dear. It's the flu season. Do take care.

heya blur!!!
long time eh? hate to pop in to find bad news. hope SK gets well very soon. also hoping you don't get sick. wow. and overflowing washers are no fun either. well, not for anyone over the age of five at least. did the dog play in the suds? :))
hope today is a little more stress-less

Oh-oh-oh!!! I hope he is feeling better soon. And you take care too.

Doggie doesn't like going to that area of the house.He knows it's not fun or cosy there. He prefers the bedrooms!

My younger son is also having flu recently & I get so worried of him. Take Care, lots of fluid & rest :):)

Pretty nice post. I just stumbled upon your blog and wanted to say that I have really enjoyed
surfing around your blog posts. After all I'll be subscribing to your feed and I hope you write again soon!