For years, I have been communicating with my colleagues based in Marlow, Buckinghamshire but have not stepped into their office. So you can imagine my excitement when I was going there for the first time last Friday!

Marlow is a charming historic town situated on the River Thames and surrounded by beautiful countryside. Being a thriving community only about 30 miles west of the centre of London, it is easily accessible by road and rail.

It was bright and sunny when I arrived at the Maidenhead train station. Geoff picked me and showed me some sights on the way to the office. 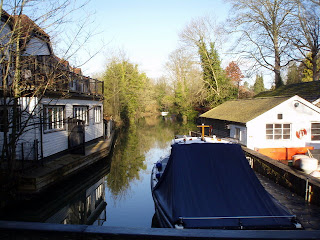 At first sight, Marlow seems to have the allure of a modern town, but on closer look, I realise it is steeped in history. Lining the street are many interesting old houses and Georgian buildings dating from the 16th, 17th and 18th centuries. 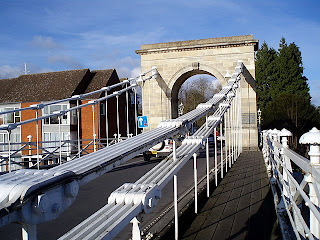 As we entered Marlow on the suspension bridge, the first thing that greeted me was the imposing Parish Church (below) dedicated to All Saints erected in 1835. We entered the premises and was given a warm welcome by a church volunteer who unveiled the interesting history of the church. 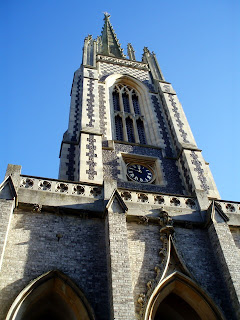 In the vestry, I saw paintings of the famous "Spotted Boy", a native of the Caribbean islands, who was sold at the cost of 1,000 guineas to John Richardson, the most celebrated showman of his day. 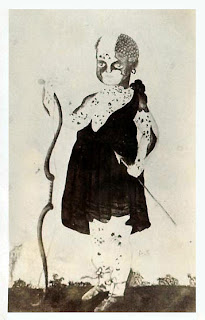 Richardson, who was himself a native of Marlow, having been born at the Old Workhouse, took a great fancy to the boy and had him christened George Alexander Gratton. But the English climate proved too much for the poor child, who died in 1813 at the age of four. Richardson had him buried in Marlow Churchyard with much pomp and ceremony. 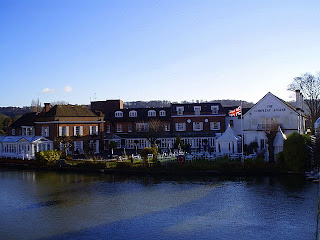 Across the church is The Compleat Angler which started as a small inn situated in an idyllic setting on the banks of the River Thames in 1640. Today it remains a hotel frequented by royalty, celebrities and film stars - which have included the late Princess Diana, Omar Sharif, Clint Eastwood and Naomi Campbell, to name a few. 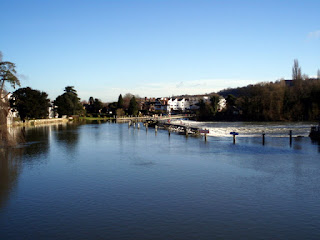 The River Thames dominates Marlow's leisure facilities with sailing, rowing, canoeing, pleasure boat trips and coarse fishing. I can imagine the buzz along the riverside during summer especially the river regattas.

After a quick tour of the little town, I met my colleagues in their bright and beautiful office with thick timber beams across the high ceiling and tall french windows. It was awesome!

We adjourned for lunch at a charming restaurant across the street where I tried chicken tarrine with couscous for the very first time. That was awesome too! 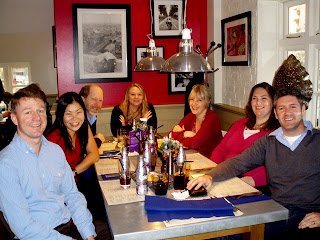 Lunch with my colleagues. 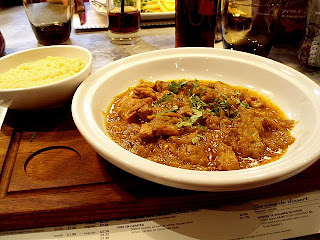 Wow .. looks like you really had a great time there huh. Your colleagues look nice too!

The sky in Marlow is bluer than London!
Looks like you had a great time. Thanks for the history, I didn't actually know that.

Thanks Huier. I ate so much during the week, my face became so round that my eyes disappeared everytime I smiled!

Water - My colleagues are very nice indeed. I was meeting some of them for the very first time.

World - It was a lovely day indeed. The sun was out and shining all day.