We had almost an entire day of rain. I walked to the market with an umbrella over my head. The larger fresh chickens were sold out by the time I arrived, so I bought two smaller ones.

Back home, I rubbed salt and black pepper all over the chickens and stuffed half a lemon, an onion and a few cloves of garlic into the cavity. In one of the chickens, I stuffed in a bunch of freshy cut rosemary from my garden as well.

The good thing about making roast chicken is the ease of preparation. After securing the chicken with string, I left them in the fridge for several hours until it was time to cook. We even had time to visit a couple of fish shops in the afternoon before returning home to prepare dinner.

I popped the chickens into the preheated oven, took Rusty out for a walk and returned quickly to peel and boil some potatoes in salt water (for 12 minutes).

After the chicken had been in the oven for 45 minutes, I flipped them over. YK brushed some honey all over the hot chicks. I covered the breast with bacon strips (so the meat will be tender and succulent) and tossed the boiled potatoes into the same pan. 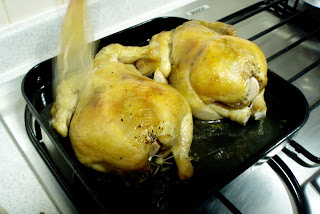 Brushing honey all over.

I put everything back into the oven to roast for another 45 minutes. By then, the aroma was so amazing, Rusty and I lingered in the kitchen to take in all the wonderful smell.

CH came over with ice cream and presents for us, all very thoughtful gifts I must say. I received gardening supplies while the kids got a digital thermometer and magnetic tank cleaner (stuff they had been eyeing on) for the aquarium. Well, I didn't buy CH any gifts. 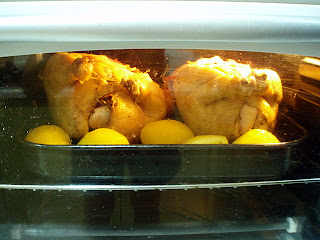 Roasting in the oven.

Here's what our dinner looked like. This is my first attempt at making roast chicken and I can hardly believe simple ingredients like salt, pepper and fresh chicken can produce such a heavenly meal. Everyone enjoyed the chicken very much. It was a success. 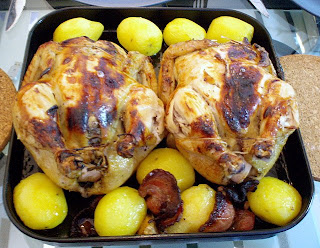 We had a pizza too. I bought several frozen pizzas from Cold Storage yesterday and chucked one into the oven while the chickens were roasting. 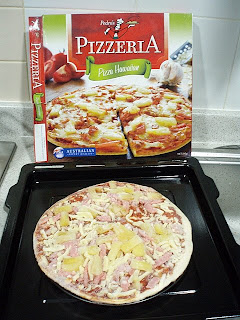 The pizza turned out ok. I like the crust but the topping was rather mushy. Maybe the oven was over crowded. Even then, we managed to finish the chickens, potatoes and pizza. 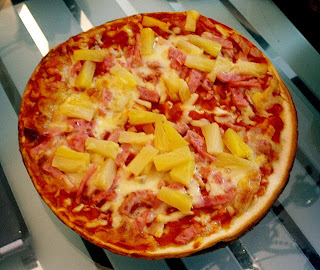 After dinner, we sat around eating ice cream, watching TV and the fishes swimming about in the tank. It was a quiet and relaxing way to spend Christmas eve but certainly an enjoyable one.
Posted by Blur Ting at 06:44

We had roast chicken for dinner too! I was greedy, brought one nearly 2kg and was way too big for a family of four. I also roasted some potatoes but I added sweet potatoes as well and it was really yummy. Merry Christmas to you & your family.

That sounds like a great day--and the chickens looked wonderful.

Merry Christmas to you and the kids! :)

MH - Thanks! And merry christmas to you and Robin too!