Three more days and I'll be on the plane to Paris. Somehow I don't feel an ounce of excitement this time round. Surely I have not forgotten the thrill of cycling through the vineyards, past the beautiful villages and century-old chateauxs barely three months ago?

Maybe it's the timing. I'm worried about mum's treatment. Plus the kids will be at home during their one-week break. I think it's the guilt.... but I'll be letting my best friend down even more if I don't go. Anyway, here's a glimpse of what's in store.

We'll arrive in Paris early Saturday morning. After unloading our bags at the hotel, we'll explore Paris on foot. It's my friend's first time, so we've got to see the sights, check out the flea markets and stroll along Champs Elysee. Maybe we'll catch the sun setting over Paris city from Sacre-coeur.

We're taking a coach to Bruges in Belgium (below) on Sunday morning. Bruges incredibly well-preserved medieval architecture makes it one of the most beautiful cities in Europe. Essentially, it's a living museum. Every glance down a narrow crooked street reveals a wonderful view of ancient architecture, every twist and turn allows the eye to fall on another meandering canal, beautiful bridge, or interesting lane that is bound to lead on to a labyrinth of middle aged buildings, ancient fortifications, cobbled alleyways and quiet tree lined squares. 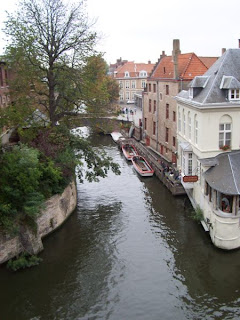 Monday morning will see us on the train to Loire Valley where we’ll find our way to Le Vieux Moulin, best described as a well-appointed country inn set in a very secluded, romantic setting. The mill house and guesthouse are nestled aside the River L'Aubois and the banks of the tiny Canal Berry.

The next few days will see us cycling through the beautiful Loire region.

We'll ride to the village of Chavignol synonymous with "frommage de chevre'" the best known goat cheese in France. This small charming village is the epitome of a French village. It also produces some of the finest Sancerre wine of this region.

Next, we will bicycle near the Loire River to the Chateaux de Tracy and vineyards where a fine Pouilly Fume' wine is produced, stopping by in the enchanting village of Donzy for lunch. Populated by many half-timbered buildings, Donzy is the home of an ancient walnut oil mill which we will also visit.

We will travel North to the village of Sancerre-a Protestant, stronghold in the 16th Century and the site of many religious wars. It is now famous for its fine white wine and we'll explore the local vineyards and some of the small winemaking communes of the Sancerrois and view the charming churches and chateaux.

Amongst some highlights are the port village on the Canal Lateral La Loire, village of Le Guetin, and the historic sites in the city of Nevers (below). We'll visit Apremont-Sur-Allier medieval flower village, featuring one of the most beautiful Floral Park's of France and an imposing castle overlooking the village and the River Allier.

You'll also find us cycling through the villages of Germigny L'Exempt and Vereaux to the village of Sancoins famous for its Wednesday marketplace, one of the largest in France and ride through the canopied forest of Apremont, where we may choose to stop for a swim in Lake Robinson.

We'll also visit Bourges, the old capital of Aquitaine and the seat of King Charles VII which is steeped in history. Here we'll find the imposing Cathedral de Saint Etienne with its renowed stained glass windows, and the Palais Jacques Coeur built in 1450A.D. Both are famous throughout Europe as examples of Gothic architecture.

If we're still feeling energetic on Friday, we can ride through several charming burgundy villages and begin our ascent to the peak for a panoramic view of the village of Vezelay (above), famous for its cathedral and the burial place of Saint Mary Magdeline of biblical history.
After almost a week of biking, we'll end up in Paris on Saturday for our flight home. I think I need some rest first. I feel tired just thinking of all the riding ahead of us.
Posted by Blur Ting at 05:11

Wow, sounds like a really fun trip. And you are packing a lot in. I think it's great that your friend has a seasoned travel companion in you. Any place is much better seen with a local, you're almost like a local. :)

If you don't want to go, I'll take your place. Of course, I probably can't bike more than 5 miles at this point, but I'll just find a nice place to have some wine and pass out.

Hey sounds fun... Don't worry about things at home (know that is easier said than done...) one week won't harm anyone!

One of my most prized possessions is a portrait I had drawn on Monmarte. Of course, its still rolled up neatly with wax paper. I never did frame it, but it represents a treasured memory of my trip to Paris all those years ago.

Just drink in the sights - literally :) - and don't worry about things at home. You deserve this break, Blur.

Thanks guys! I'll psyche myself up these couple of days. Of course, must make sure things are running well and organised before I leave... like stocking up the larder with enough food for the kids :-)

I'm sure I'll have a good time when I get there. Will think of you all!

Great post however , I was wanting to know if you could write a litte more on this
subject? I'd be very grateful if you could elaborate a little bit further.
Kudos!

Excellent post. Keep posting such kind of information on your site.

Im really impressed by it.
Hello there, You have done an incredible job.

I will certainly digg it and in my opinion recommend to my friends.
I am confident they will be benefited from this site.