Charles Schulz would be so proud of my little Rusty! I'm talking about peanuts of course. I was eating peanuts out on the porch one day. Some rolled off the table onto the floor. I didn't even notice Rusty sitting quietly under the table with a peanut between his paws, chewing off the shells and eating up the little nuts inside. One after another, he chewed and munched until there was a pile of mangled shells around him.

That's when I discovered he loves peanuts as much as I do. I'm sure he would get along famously with Snoopy too... though he'll probably chew up Woodstock.

Whenever his little ears hear me rip open a pack of nuts, he'll sit right next to me and we'll munch our afternoon away.

CH is always telling me not to feed the dogs with everything I eat. "You may kill him you know!" Yah..yah...As a responsible dog owner, I make it a point to check his list of forbidden food every now and then. Apparently peanuts and banana didn't make it to the list. YAY! 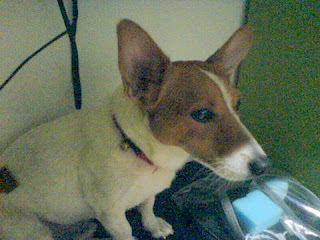 How can I not pamper my little pooch? Isn't he the cutest?
In case you're wondering..... here's the list of FOOD TO AVOID:
Certain types of raw fish have been found to be extremely unsafe for dogs. They contain a microorganism that affects and kills dogs, but not humans or other animals. Salmon in particular is a danger but other types of fish carry the bacteria as well.

While dogs can eat some of the same foods that we do, there are many they should not eat. If your dog has ingested any of these foods, get veterinary help immediately:

Onions: Onions destroy red blood cells and can cause anemia.

Chocolate: Chocolate can cause seizures, coma and death. Baker’schocolate is the most dangerous. A dog can consume milk chocolate and appear to be fine because it is not as concentrated, but it is still dangerous.

Animal fat and fried foods: Excessive fat can cause pancreatitis.

Bones: Bones can splinter and damage a dog’s internal organs.

Tomatoes: Tomatoes can cause tremors and heart arrhythmias. Tomato plants are the most toxic, but tomatoes themselves are also unsafe.

Avocados: The fruit, pit and plant are all toxic. They can cause difficulty breathing and fluid accumulation in the chest, abdomen and heart.

Nutmeg: Nutmeg can cause tremors, seizures and death.

Apples, Cherries, Peaches and similar fruit: The seeds of these fruits contain cyanide, which is poisonous to dogs as well as humans. Unlike humans, dogs do not know to stop eating at the core/pit and easily ingest them.

Raw eggs: Raw eggs can cause salmonella poisoning in dogs. Dogs havea shorter digestive tract than humans and are not as likely to suffer from food poisoning, but it is still possible.

GOOD FOOD:
Some“human” foods are good for dogs. Most of these are healthier than the boxed treats you buy in the grocery store. This is just a small list of examples of foods dogs can eat, not a list of everyfood they should eat. Dogs won’t necessarily get all the nutrients they need if they eat these foods exclusively, so check with your veterinarian if you are interested in feeding your dog a home cooked diet. Any food that causes stomach upsets or digestive problems in your dogs should be avoided.

Vegetables:
Dogs have shorter digestive tracts than humans and cannot digest most vegetables whole or in large chunks. It’s best to put them through a food processor before giving them to your dog.
Carrots
Green Beans
Lettuce
Potatoes
Yams
Red and green bell peppers

Grains:
Grains should not be given in large amounts or make up a large part of a dog’s diet, but these are generally safe in small amounts.
Rice
Bread
Oats

Dairy products
Use dairy products with caution as they are high in fat and can cause pancreatitis, gas and diarrhea. Usually, nonfat plain yogurt is safe in small amounts.
Posted by Blur Ting at 22:26

just a little note here..from experience...
i have fed my dogs..leftover spaghetti.. containing..onions, tomatoes, and garlic...all of which are on the bad list.. which i didnt know until my dog recently found and ate a chocolate bar...she was fine btw. sometimes it takes large quantities of chocolate..sometimes not..always keep a close eye on your dog if they get hold of chocolate...or take them to the vet...we got lucky.
but as for the spag, sauce and ingredients....must also be large quantities...they have eaten that, and pizza for years with no probs at all. but each dog may different.

First of all, I think Rusty should have his own blog: "The Never Ending Splendor of Being Rusty" or "Adventures in Rustyville" or "Rusty: Perhaps the Cutest Pup on the Planet". Just a suggestion. Mull it over at will.

Thanks for posting that list. I think its important for that kind of info to be out there just in case.

Hi Soul, I thought dogs can eat everything too until CH sent me the list. My dog still eat spag and pizza :-I

Thanks Holly for the wonderful names! Rusty will be so happy to blog but I'll have to find the time and stories!