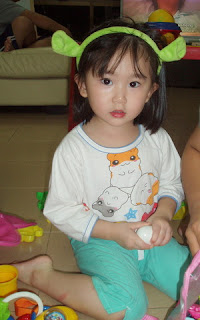 Ting is turning into a little Shrek. She's at that age now, what we call the terrible twos. For the clueless, she's often often saying 'no', having frequent mood changes and temper tantrums. Of course she's not being defiant or rebellious on purpose, just trying to express her growing independence, perhaps not in the most elegant manner.

She often comes back from playschool feeling frustrated and resorts to temper tantrums when she doesn't get her way. Worse still, she may punish her helpless sister like that time when she pushed her cradle to the sunny spot near the window so that 'mei mei' can sun bathe.

When I hold her sister, she'd come running and demand that I put 'mei mei' in the cot and carry her instead. "I don't want mei mei!" is her current favourite line. She cuddles Rusty when she's in a good mood and before you can say 'good girl', she's running around screaming "I don't want Rusty!"

Oh, I enjoy having her around! She's an endless source of delight and her love of silliness and laughter allows me to be a child again!
Posted by Blur Ting at 22:05

Hi, great articles you have there. if u are interested to xchange link with me , please leave me a message at my cbox once you are done...thank you keep the great work here...

Oh, how I remember these days!!

I love her little Shrek ears. They are adorable! You are so much more patient than I could ever hope to be...

It's hard to be patient really when they're acting up but then again, they grow up so quickly.

That's a lovely photo of her with the shrek ears. :)

she is just lovely. what a beautiful face.

how can they be sooo darn cute yet so darn irritating too? i have one ya know? 13 going on 30. enjoy her while she's still smaller than you. ;)))