By Wednesday, we were already getting into the swing of things. We were familiar with our bikes and our muscles were more conditioned to tackle longer rides. The only thing that troubled me was my cough. I had to abstain from snacks and wine. During dinner, I downed some whiskey and hot water which always work for me.

We were blessed with another day of good weather and were really lucky to see fields of sunflowers! We left Vieux Moulin cycling South through the villages of Germigny L'Exempt and Vereaux to our first destination the village of Sancoins famous for its outside Wednesday marketplace, one of the largest in France. After a lunch along the banks of the Canal Berry we continued on to the fortress Chateaux of Sagonne, once owned by the Count of Bourges. We must have covered about 90km (40miles) that day.

Dinner that night was another heavenly meal of stewed beef and the best rattatouille I had ever eaten! The apple strudel was also out of this world....huge chunks of caramalised apple on a really thin buttery crust - you can never get this at the stores. Michelle had really outdone herself this time, who's counting calories anymore! 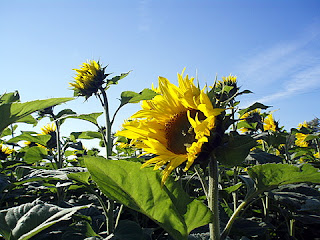 Finally, we saw gorgeous sunflowers that were still in bloom! 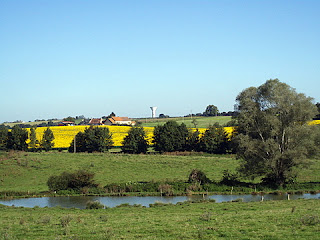 An entire field of sunflowers in the distance. At the famous Wednesday market of Sancoins, one of the largest in France. There were lots of things for sale, ranging from food and fruits to lingerie and clothes. 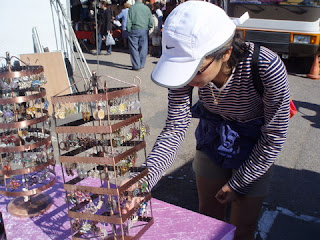 My friend bought some earrings and necklace. I ended up buying nothing, except for picnic food for lunch. 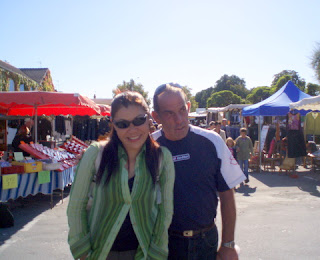 As I was walking in the market, a French guy approached me and asked for a photo with him which I obliged. It's rather unusual to find Asians in these small towns. The whole week in Loire, I don't remember seeing any Asians at all! And we were the first to join this bicyle tour since they started a decade ago. Anyway, this man tried to convince me he's a cop and showed me his badge in his wallet. Whatever! 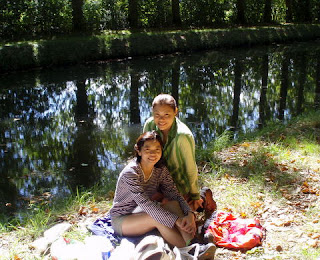 We lunched by the shady bank of the Loire river. Lunch comprised roast chicken and potatoes, seafood paella, baguette and tarts. Oh, and beer! That probably explains why I coughed all night. 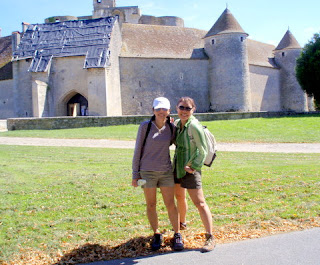 What happens when you put two girls in front of a castle that used to belong to the Count of Bourges? They turn into giggly princesses! 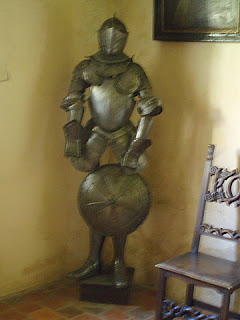 It was really gloomy and dusty inside the Chateaux of Sagonne. Lots of ancient objects and grim faces of the lords and their mistresses hanging on the wall who seemed to stare back at us. Spooky! 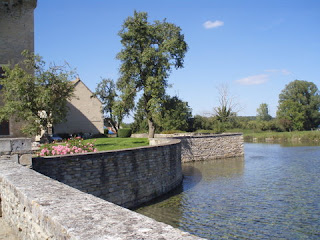 This Chateau has a real moat around it. We were so impressed, and it's hard not to feel like a princess when you're there. 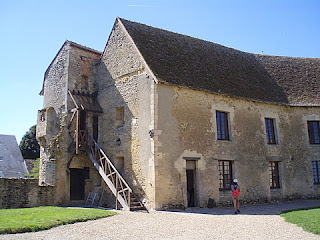 Checking out every nook and cranny. 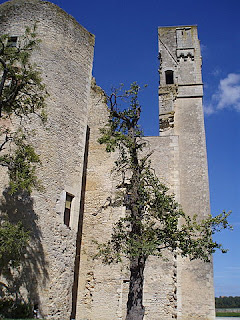 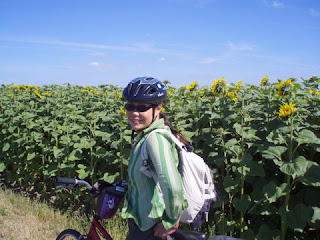 A short stop to admire the sunflowers on the way back to the villa.
Thursday morning saw us cycling near the Loire River through the vineyards of Pouilly to arrive in the enchanting village of Donzy for lunch. Populated by many half-timbered buildings, Donzy is the home of an ancient walnut oil mill. The village of Pouilly produces some of the finest Pouilly Fume' wines for the better restaurants of England and America. 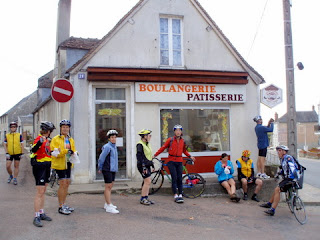 A brief stop at the patisserie. I had a piece of raspberry mousse cake topped with fresh raspberries and redcurrants. My friend picked a goat cheese pastry thinking it was chicken pie. She hates goat cheese and I refused to eat it up for her! I have not seen any chicken pies in France. 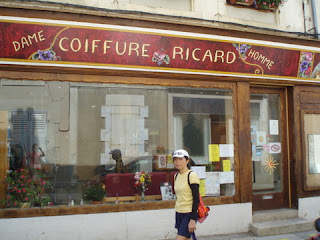 At the little town called Donzy. Look at how traditional and quaint the shop signage is. This is the only hairdresser shop in this town. 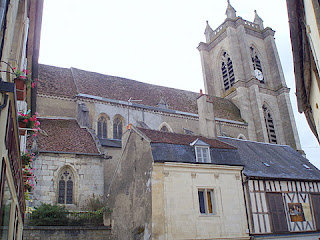 Donzy is famous for the half-timbered buildings. 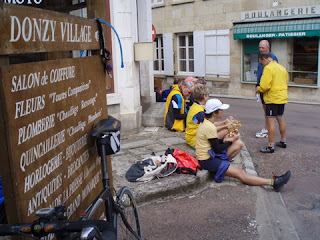 You can count the number of shops with your hands from this signboard. As the restaurants were closing (they are always closing or closed), we bought pastries at the only patisserie for lunch. We practically bought up everything in that tiny shop, even the coca-colas. They had alot of baking to do when they reopened in the afternoon I'm sure. 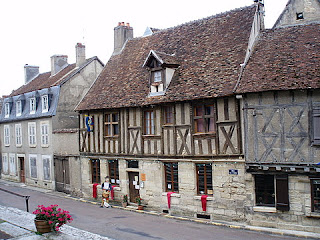 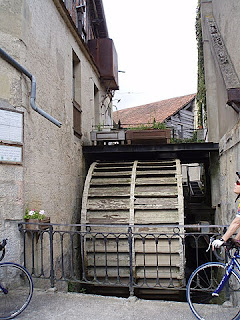 We continued cycling after lunch and rode past an old water mill. It's really ancient. 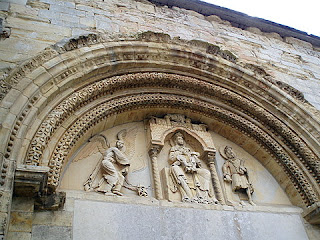 We rode by an old cemetery that's rich in history. That carving in the middle is Mother Mary holding Jesus, with the hand of God above her. 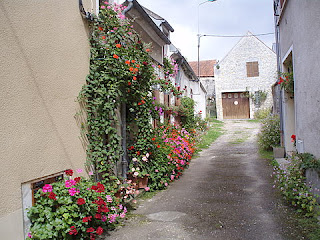 We stopped by the charming village of Pouilly for coffee. We were craving for ice cream and couldn't even find a store selling ice cream (glace) at that hour! We finally settled for coffee in a tiny cafe run by an adorable old French man who couldn't speak a word of English. I know enough French to order myself a cup of cafe au lait but my poor friend asked for cafe latte and ended up with a cup of tea. 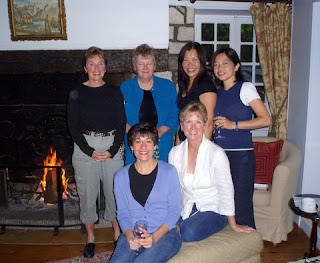 The group gathered round the fireplace before dinner to chat and have a drink. My friend is quite fascinated with fireplaces simply because we don't have them in Singapore. She persuaded the owner to build a fire though it wasn't that chilly. We could see the poor guy gathering logs and fighting off spiders in the shed just to grant her wish. I was glad they set up the fire though. 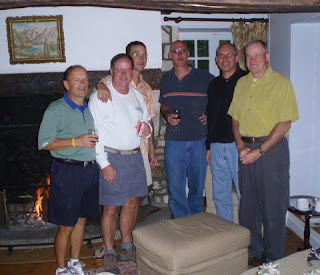 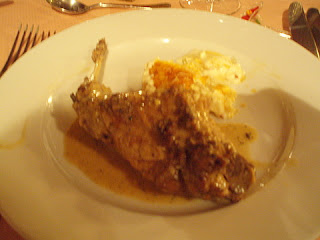 We had rabbit for dinner. It's the first time I ate rabbit. It's more tender and tastier than chicken. It was served with potatoes baked in cream and cheese.
Posted by Blur Ting at 18:50

I love the Sunflower pictures, and the river picture is soooo pretty.

My legs are aching just thinking how far you cycled!

yes i like the sunflowers too... and the rabbit...looked good.. tho i've never tried

Yes, I was jumping up and down with joy when I saw the sunflowers. It's nice to see one, imagine seeing a whole field of them!

If you experience some emotional or physical problems in your life it can soon be seen in the condition of
your hair, using natural and organic products aids in the recovery of
your hair. Likewise, using imported shampoos and conditioners from a tropical country
when your climate is cold and temperate is not such a
good idea. It has been proved that products which contain vitamins will strengthen
your hair.

They do not require as much work as many other animals do and are really fun to watch.
E-papers do not minimize from covering stories that received little coverage in the reputed national papers.
He quickly became a well known activist for Islamic revivalism calling for the ouster of pro-western governments using violent means if necessary.

But Punjabi news paper has the upper hand because almost population
speaks Punjabi, the official language of Punjab.

The dishes and ingredients differ slightly from region to region, with each region
having their own specialties.

Make sure you only use clean balls for playing on indoor simulator.
The reason that you should take a look at a
Joana's Star - Craft 2 guide review is obvious. The students are imparted cost-effective training into experiencing and learning how situations of emergency can be handled. The history of diamond simulants starts with the history of real diamonds which have to be known and treasured before some enterprising person gets around to imitating them with a cheap substitute. The instruments that lag in real life, lag correctly, gyro drift is modeled correctly, the magnetic compass is subject to aircraft body forces - all those things that make real world flying a challenge are present.

Even though the Best Penis Enlargement process can’t do
more for you, you can use a device called Penile Extender,
to finally get those inches that puberty didn’t want to give you.

Yoga is a combination of various asanas (postures), and prominent
asanas which affect breast enhancement/reduction processes are as follows: Vrikshasana (Tree posture) - Start breathing in out; raise your arms above the
head while join your hands. Studies by groups of researches and scientists have
also shown that Ves - Pro’s natural breast enlargement
cream helps to maintain female hormonal balance. However, they could
not succeed in fooling the customers and the truth as come
to the forefront. However, within this situation your penis Advantage program differs.

Natural remedies help the body's immunity system by assisting in the regeneration of good bacteria in the body. Further information can be obtained by contacting the Washington Institute of Natural Medicine at (202) 237-7681. And, for individuals who are eligible for both CLASS and Medicaid, a portion of the CLASS benefits will be used to offset the costs to Medicaid. The fourth chair of the Fine Group is a rotating chair filled by Jimmy Gaudreau (veteran of The Country Gentlemen, J. Finally, I think anyone would be inspired by Lynda's story.