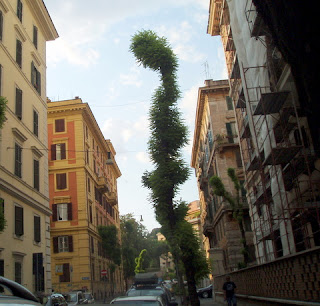 An alley in Rome
I’ve learned so much through my travels but there is one lesson that I will never forget.

Two years ago, I stepped out of the train station in Rome and started walking down one of the many lanes in search of a motel. I made a mental note of the landmarks that I passed by, like the luxurious Radisson Hotel that I wasn’t prepared to pay and the cluster of shops overflowing with textile and other merchandise.

I walked into a small motel with a small red awning outside the door. What joy to find that they had a room for me, at a very reasonable price. It was still bright outside at 4.30pm, I decided to take a walk.

As I left the hotel, I took note of the streets I walked on. It was easy to remember, I thought. I strayed into the residential area and was soon captivated by the kids playing in the playground and life in the quiet suburbs. It was getting late. Time to go back.

Walking back to the city was easy but when I tried to locate my motel, that’s when I got horribly lost. All the shops were shuttered. The entire city looked totally desolate without the colourful displays, and suddenly every street corner looked identical. Restaurants that were closed had sprung to life, changing the scene almost entirely.

I realized I had committed a big mistake - I had not noted the name of my motel. All I had was the room key and my purse. I kept my composure and began to comb the alleys near the train station systematically.

I searched for hours. No sign of the hotel with the red awning. I stopped at a deli for a slice of pizza. I ask the deli owner for directions but without any name or address, how can anyone help me?

I continued walking. My legs were tired. There is no way the motel could just disappear. Weary and frantic, I almost sat on the sidewalk and cry. It was already past 10pm. I decided to check in another small motel and continue my search when day breaks.

I spilled out my pathetic story to the old man at the counter. He asked if I could remember any landmarks. In my frantic state, I forgot the name of Radisson Hotel. All I could recall was the bright hotel with the letter ‘R’ and that elusive red awning. He asked a peculiar question. “When you entered your motel, was the staircase on the right or left hand side?” That, I could remember!

He thought for a moment and told me to look 2 streets down the road. If I don’t find it, I should go back to him. He couldn't bring me there as he was the only person on duty that night.

I walked away with renewed energy and saw the red awning in the distance. I leapt up the steps, opened the door to find the phone in my room ringing. It was that gentleman! He wanted to know if I had found the right hotel. I was filled with such gratitude!

It was almost midnight. As I sat on my bed, it started pouring outside, with lightning flashing across the sky. Thank God I met this kind Italian!

I stopped by his motel in the morning to find he had gone home. In the daylight, I realized if I had expanded my search just a little wider, I wouldn't have missed my motel.

From then on, I always carry with me the name and address of the hotels I stay in.
Posted by Blur Ting at 19:55

I love reading about your traveling experiences... you are very lucky to have the opportunity to see the world...
If it were up to me I'd take a year's sabbatical and just travel...

Yes, indeed. I would be happy to take a year off too but too bad, work beckons, and the kids... So, I hope to find more time when they're older and independent.

Hi superb website! Does running a blog such as this require a
massive amount work? I have virtually no understanding
of coding however I had been hoping to start my own blog soon. Anyways,
if you have any recommendations or tips for new blog owners please
share. I know this is off subject but I just had to ask.
Many thanks!