It was -17 degree C when we arrived in Munich. The city was blanketed in snow. Bad news. Air France had failed to load our luggage while on transit in Paris. Thank goodness the boys were adequately dressed.

We arrived at the hotel to find the entire backyard covered in a fresh layer of snow. While the adults were fretting about the delayed baggage, the boys were whooping with joy.

It has been six years but I still remember their gleeful faces so vividly. That was the first time they saw snow and oh, how they loved it!
“Can we stay in this hotel all week and just play with snow?” they implored.
“We’ve lots of other interesting places to visit. You’ll see a lot more snow, I promise.”

As I flip through the album now, I see their exuberance… whether they were making snow angel or snowballs, having snow fights or building a snowman... in the small villages in Budapest, the beautiful city of Prague or the icing sugar city of Salzburg … how I love their joyful little faces and the brotherly love.

“Do you still remember the places we went to in Eastern Europe?” I asked the other day.
“We only remember the snow.”

Some memories just stay with us forever. 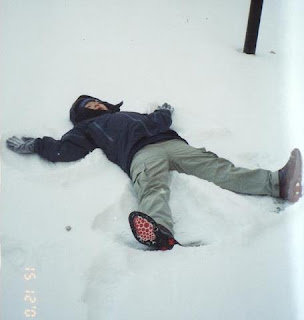 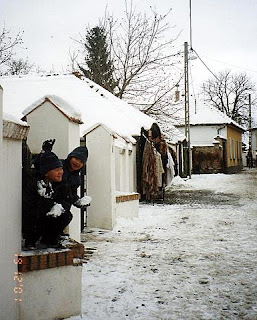 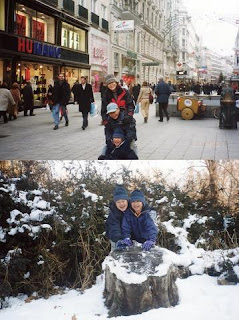 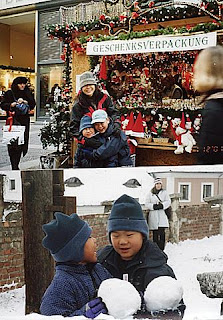 I smiled when I read about them remembering only the snow :) you know I could almost see their facial expression when they said that :)

I was telling them, if I had known, we didn't have to go all the way there. Just put them in a barnyard that's surrounded with snow and they'll be happy.

Last time I was involved in a snowstorm we built a giant snowman and gave him an ice cold Heineken. I'm not a huge fan of that beer, but on this hot July evening I'd sure love a good snowfall. :)

Awwww. David...you gave the SNOWMAN a Heineken? Wow. did he like it?

Aren't kids great with seeing things for the first time?? Snow, the ocean, whatever???

Who are you enjoying Singapore?

The thing that strikes me as great about this story is that it is a wonderful example of being completely in the moment - and reveling in it regardless of what else is going on.

Yes guys. The great thing about kids is they have a knack for 'enjoying the moment'. When they grow older, they start to lose that.

It's the same with swimming. They could spend hours in the pool, just splashing around, never getting bored.

BTW, I love how you guys from different parts of the world communicate with each other in our little blog community here. It's like sitting around a table having coffee...

I love your blog.. very nice colors & theme. Diid you create this webseite yourself or did you hire someone to do it for you?
Plz respond as I'm looking to create my own blog and would like to know where u got this
from. kudos