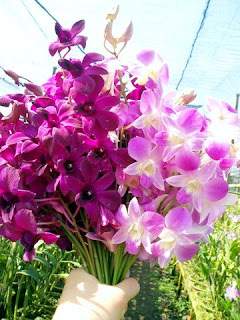 Growing up, though life was simple and carefree, mum was always busy in her orchid garden and we had to help out with the chores at home. My brothers and I learned to cook from young. We could whip up a decent meal for the entire family since we were about 12 or 13.

Dad was very resourceful. He acquired lots of exotic orchids for the garden and negotiated a contract with RISIS who purchased our orchids for gold-plating. These were made into unique brooches and pendants which became very popular with the tourists. We probably had the largest collection of exotic orchids in Singapore at that time. Till today, I had no idea where he sourced them from as there was no Internet then. Perhaps having a job at the Science Centre provided him with the right contacts. He worked in the exhibition design department and I remember he would let me wander around the exhibition halls on Saturdays while he worked in his office.

During school vacations, we were expected to help mum in the garden. We had loads of stuff to do. Depending on the species, the orchids were either planted in ceramic pots or directly onto the ground. When a plant outgrew a pot, mum would break it up into smaller parts. Our job was to put each part into a new pot, secure it with several chunks of broken brick pieces and top up with charcoal.

My elder brother and I would do the strenuous task, like breaking up whole pieces of bricks into smaller chunks while my younger brother did the less labourious stuff like sorting out the plants. I remember he was quite accident prone, like he would cut his finger or injure his toe. So he was more of a handful than any real help. Then again, he's 4 years younger than me.

On some days, we would transfer hundreds of potted plants from one section of the garden to another. We hated that! But looking back, I am thankful for all that strength-training and muscle-building exercise!

I think mum brought out the entrepreneur in me. During weekends, we were allowed to harvest the smaller stalks of flowers in the garden, the ones that were not suitable for export, and she would bundle them and supply to her flower shop customers as ‘miniature bouquets’. Our little bouquets actually made us a decent amount of extra money every month which she would put into our savings account.

In a way, we were pretty comfortable and the home-based farm grew in size and became more commercialized when we moved to the agrotech farm. Of course today, mum has workers helping her in the farm and we stopped doing anymore work.
Posted by Blur Ting at 17:55

You know what, while reading this, I actually can't imagine the next generation doing the work... like can you imagine Xiao Ting or Qi Qi moving the plant pots?

Ah don't talk about them, just look at me, I don't even dare to carry a live chicken, my mom my sis are afraid too, even my dad... we are so not in sync with the chicken farm. What a disaster! :(

Oh dear! I won't dare hold a live chicken too! What are we going to eat in future, if nobody dares to handle these animals, I wonder?