On Monday morning, we were back at that infamous pick-up point again to board the tour bus that would bring us to Củ Chi tunnels, an immense network of connecting underground tunnels located in the Cu Chi district of Ho Chi Minh City and are part of a much larger network of tunnels that underlie much of the country. 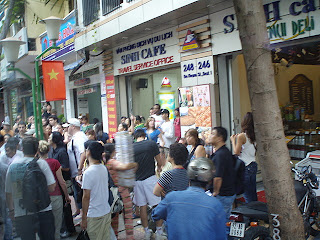 Once again, we were back at this crowded street, waiting to board the bus. 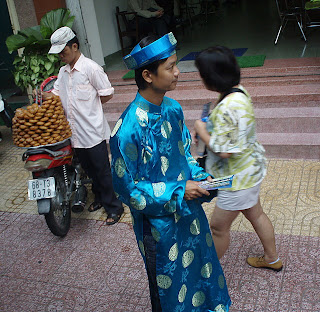 The enterprising locals were hawking their wares. This man came in a traditional Chinese outfit. 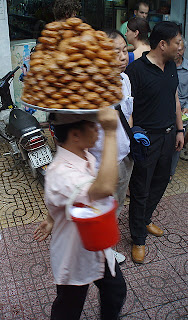 This man balanced a tray of doughnuts on his head. 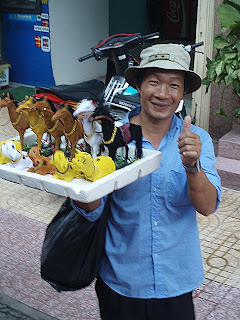 And this guy was telling me his toys are the best!

Located 70km from the city, the bus journey to the tunnels took about 2 hours. Along the way, we made a scheduled stop at the handicap's handicraft centre to see how lacquer-ware and other handicrafts are made. 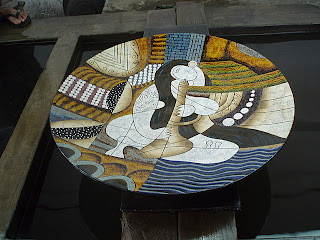 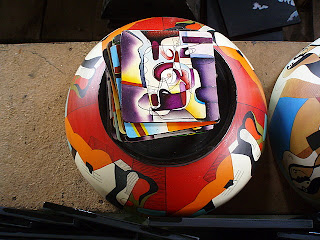 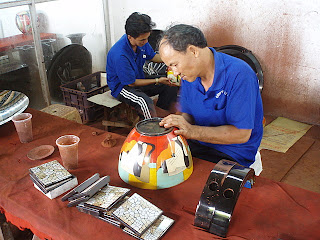 The Củ Chi tunnels were the location of several military campaigns during the Vietnam War, and were the National Front for the Liberation of South Vietnam's base of operations for the Tết Offensive in 1968.
They were used by NLF guerrillas as hiding spots during combat, and served as communication and supply routes, hospitals, food and weapon caches and living quarters for numerous guerrilla fighters. The tunnels began in 1948 so that the Viet Minh could hide from French air and ground sweeps. Each hamlet built their own underground communications route through the hard clay, and over the years, the separate tunnels were slowly and meticulously connected and fortified. By 1965, there were over 200 kilometers of connected tunnel.
.
As the tunnel system grew, so did its complexity. Sleeping chambers, kitchens and wells were built to house and feed the growing number of residents and rudimentary hospitals created to treat the wounded. Most of the supplies used to build and maintain the tunnels were stolen or scavenged from U.S. bases or troops.

Life in the tunnels was difficult. Air, food and water were scarce and the tunnels were infested with ants, poisonous centipedes, spiders and mosquitoes. Most of the time, guerrillas would spend the day in the tunnels working or resting and come out only at night to scavenge supplies, tend their crops or engage the enemy in battle. Sometimes, during periods of heavy bombing or American troop movement, they would be forced to remain underground for many days at a time. Sickness was rampant among the people living in the tunnels; especially malaria, which accounted for the second largest cause of death next to battle wounds. 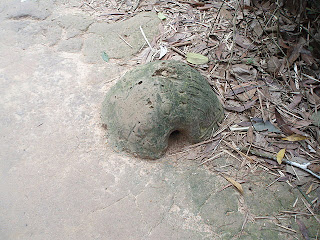 An above ground air vent disguised as a termite mound. 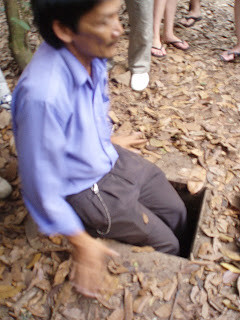 The trap door on the jungle floor leads down into the Củ Chi tunnels. The opening is so tiny, it can barely fit a skinny person. This one has already been enlarged by 40% for demonstration purposes. 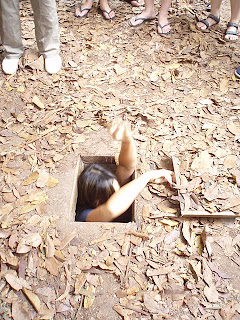 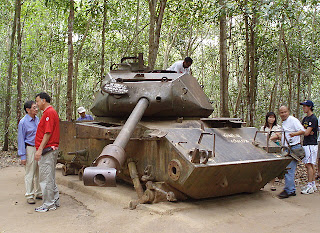 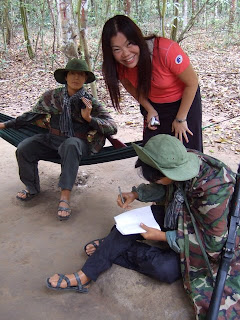 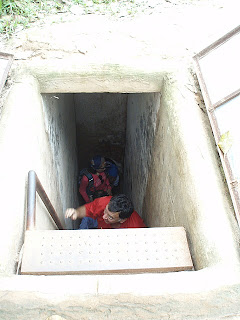 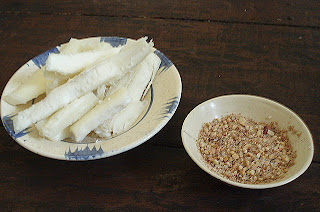 Food was scarce during the war. We sampled boiled tapioca and roasted peanuts that were the staple food then.
Posted by Blur Ting at 05:34

I like the handicraft. Looks very nice leh. Cheap not? The man in the blue outfit look like how those chinese shows with zombies coming to life and jumping around.

Ha yeah we took the Mekong river cruise, had to switch to a sampan going to a small village... also went to Chu Chi tunnel and I ate the tapioca too :)
Did you see the seafood farms along the Mekong river? Wow I just couldn't eat any seafood from Vietnam after that...

Those tunnels are amazing! Great post. I feel as if I'm there.

Waterlearner - they are very nice but not very cheap. I didn't buy any cos it's difficult to lug things around when I travel. It's really alot of effort to produce one single piece though.

The set up for these 2 tours is very touristy, don't you agree?

Hi Dan! Yup they are amazing, and amazingly tiny inside! We went in and had to crouch and crawl (mind you, they're already enlarged for tourist) in the stuffy and dark space.

I like to show what I have seen along the way so that you guys can see almost exactly the same thing. I'm glad it made you feel that way.:-)

Water - That's the same thing that came to my mind when I saw that man! I told CH, "Look! A ziang shi!!"

The guy handing out flyers was wearing a Vietnamese costume I believe. The robe may have looked Chinese but the hat is distinctly Vietnamese.

The tunnel was a real killer. Can't imagine living and fighting in one for months. We were sweating and panting after just minutes.

I cannot imagine what will happen if stuck inside that tiny hole.

LOL, that ziang shi man so skinny, he need to work harder to look for "prey"... oppps ;p

THANKS for the pics and introduction. The hole in the ground is SO SMALL. I daren't go into it...brrr...

Speaking of guerillas reminds me of the guerillas in Indo he he he he...