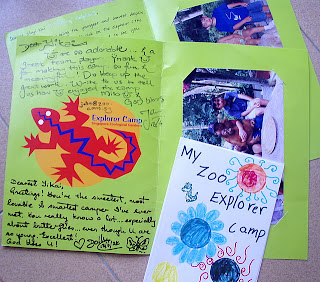 Before bedtime last night, I spent a couple of hours looking at the kids' photo albums. For a while, I was giggling over their cute and adorable pictures... of them frolicking in the sea, hugging orang utans at the zoo, running in the park and celebrating birthdays at play school. I'm grateful that their kindergarten graduation and zoo camps have been immortalised in photo prints for my memory bank is getting too cluttered.

I must have taken thousands of photos of them growing up. To think that I had almost lost possession of these albums some years ago... When I was given custody of the kids, their father had insisted that I leave the photos behind for him. Well, I did, knowing that having the kids is far more important than the photo prints.

Just before we sold the matrimonial home, I went back to find them languishing in the storeroom. If they had meant so much to him, he would have brought them to his new home right? I took every single one home and they are in my safe hands again.

Now that they are in my possession, I find they're an important part of our lives. While our memories fade as we age, the photos help to preserve those precious moments. Now you see why I am still taking photos today.
Posted by Blur Ting at 17:13

That's a great find. And I agree with you about taking photos. Remembering moments in our heads is good but remembering them with images in hand is even better.

Photos will always bring back very fond memories. My .. when YK WAS eight? How old is he now? You look so young to have kids that age!!

I agree with Karen, you are a young mummy. I enjoyed looking thru old photos of my boys too :)

Photo albums are great! :)
And YK and SK were really cute when they were young :)
Now I just need to look at baby K to see how cute YK was :)

I think photos of loved ones are irreplaceable.
I'm glad you have them in your possession again.

OOHHHH...those are SO NICE!!! I read what was written there! ;-D

And I shall heed your advice, Blur, about taking LOADS of pics...I'll do that when my kid(s) come into this world he he he...

photos are precious and even more so now that we have blogs to put them on..but i like looking at old fashioned photo albums too..dont you?

I forgot to tag people in my latest post, so I tagged you to do the meme he he he...

Proudest Moment in My Life

so glad you have their photos back. i am still working on getting all my college photos back from an ex-boyfriend!