The haze is back! 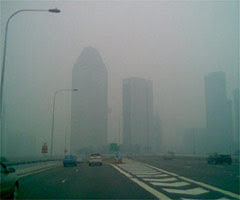 When I got up this morning, our estate was shrouded in haze. Argh, the haze has descended upon us again. No wonder my head feels tight and the kids’ eczema resurfaced again.

For several months each year, we feel the ill effects of burning fires and drifting smoke (from "slash and burn" cultivation and forest fires) from Sumatra and Borneo. I remember the first time we experienced haze was the month SK was born in 1994. Later, in 1997 and 1998, fires blackened skies across South-east Asia for many months.

When the skies turn hazy, everyone starts checking on the Pollutant Standards Index (PSI). We’ve all become experts at reading the PSI level. Anything below 50 is considered healthy while a reading above 100 means that we should try to stay indoors and avoid physical exertion. During this period, those with chronic heart or lung ailments are at risk and the general population will experience transient symptoms of irritation e.g. eye irritation, sneezing or coughing. Well, YK’s asthmatic condition usually flares up when the air quality becomes very bad.

Exactly a year ago, the PSI reading hit a high of 150 but the highest PSI reading ever recorded here was in September 1997 when it hit 226! It became a national crisis. Even Malaysia is not spared. The situation was so bad, visibility was down to a few metres at its worst!

Besides praying for a change in the wind patterns and an increase in rainfall over fire-stricken areas in the region, there is nothing much we can do. At the peak of the haze crisis in September 2006, there were a series of roundtable dialogues/forums involving government and business leaders, NGOs, and local, regional and international experts to find effective solutions to the problem. I hope they have the situation under control.
Posted by Blur Ting at 19:36

That is the only thing in Singapore which I don't miss and glad to be out of it.
Man I hate it!

WOAH!!! I didn't know it affect Singapore that badly! I've heard about this forest fire stuff, but in Java we aren't affected by it. I SURE hope the wind's gonna change and that it won't happen again...at least not too often and not too badly. It's so damaging!!!

When I visited Singapore last year, I remember I was surprised how hazy it was. I have some great out door pics, with the hazy skies in the background.
But I (naively) didn't realise it affected peoples health so much.
I hope you have a change of wind and weather real soon.

a litle out of topic - did the volcanic ash from the 1991 eruption of Mt. Pinatubo in the Philippines hover over Singapore? I'm pretty sure it went as far as Malaysia and was wonderin' if it sprinkled Singapore skies too.

yeah those things affect EVERYWHERE. we get the "yellow" sands from the desert in China.