We had seafood dinner at Changi Village last night to placate SK's craving for crabs. After a hearty meal of salt and pepper crab, oat-meal prawns, spicy clams and stir-fried vegetables, SK proclaimed it's the best dinner he's had all year. Yah, the food at Tekong Seafood Restaurant was delicious. Thank you C.H!

Changi Village was abuzz with people. Besides the usual dinner crowd at the food centre, there were lots of anglers and families camping by the beach. 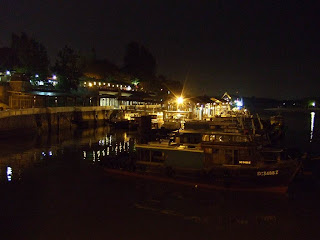 Bright lights at the bumboat jetty. 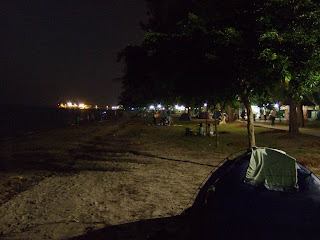 Though Singapore is surrounded by water, we don't have spectacular beaches. Yet there were many campers last night... grilling food, fishing or simply idling under the full moon. 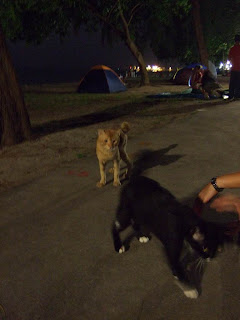 This black stray ambled close to me for some affection. The brown one behind appeared quite upset and was later seen chiding the other "You're flirting again?!"
Posted by Blur Ting at 16:28

exploring the beach at night after a yummy seafood dinner - it can't get any better than that.

Wow, if I was living anywhere near the beach, that would be what I'd do every weekend ... Looks cool :)

And I pity that dirty little flirty cat when he gets home ... LOL!

I used to go to Changi Village too. My MIL stay there !! Btw, I can only see the last photo. The other 2 din load up u'know? :)

I love Singapore but haven't been there in so many years. Until a point my family used to visit Singapore every year....

As a fellow pet lover, can you drop by my blog and see what I'm asking my blog friends to do? I'd be so appreciative if you spread the word...