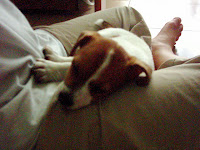 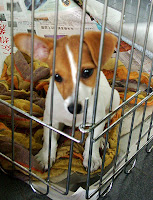 Rusty the puppy.
I have been waking up to heavy morning downpours all week. I am beginning to suspect that only our neighbourhood experiences this phenomenon. We get more rain than anyone else because we live near the reservoir, the so-called catchment area. So, we have rain clouds hanging above our heads! I always drive to the highway 3 km away to find blue skies and the sun shining brightly. So you can imagine I’ll be prespiring in my sweater all day long!

We had a bad thunderstorm yesterday morning. When it rains, Rusty becomes the most timid and insecure creature. Well, the psychiatrist would probably say it's got something to do with his traumatic childhood. But hey, we bought him when he was 6 weeks old and gave him lots of love and affection! Granted, he was separated from his mummy and siblings at birth in Melbourne and survived an 8 hour flight to Singapore. He was probably sent to quarantine, then immunized etc before ending up in the pet store…. Come to think of it, it was indeed a terrifying and traumatic experience for a tiny puppy.

Like I said, it was pouring as I was preparing to leave for work. Rusty was following me around in the house, wearing a pathetic and worried expression. I got out of the house and ran to my car that was parked outside the garage. The moment I got in, I tried to slam the door shut to prevent rain from getting in.

The door wouldn’t close. OMG! That silly Rusty had ran with me, in the rain and tried to climb into the car. I didn’t expect him to get out of the house! I felt so bad for slamming the door on his little body and spent the whole day at work worrying that I may have hurt him.

Thank God he was still running and jumping merrily when I got home. Well, another lesson learned….always look before you shut the door!
Posted by Blur Ting at 20:47

OUCH! Did YK nag at you for slamming the door? :)
Btw, I really don't miss the tropical thunderstorms now. In the past I took bus to work, and got so soaked by the time I reached the office. Then I had to sit in the air-conditioned room the whole day and caught a cold subsequently. No fun at all.

Of course! He was at the porch and saw him being slammed and quickly got Rusty back into the house. He kept asking me after that "What's going to happen if Rusty dies?"

Yah, it's really sickening to plough through all that rain early in the morning!

Adorable puppy! Thanx for stopping by and commenting too.

My litle boy, Amos is scare of thunder too. He will wake up in fear & want to be carried to sleep. There was once that we forgotten & left him alone in the living room. The thunder so LOUD that he ran screaming from SHOCK. He took a long time to calm down. He is scare of rain even in the car, he will cry when he see rain pouring onto the car window :)

I hope he will overcome all these fear as he grow older :)

Oh dear, poor Amos. Don't worry, he'll get better when he grows up.

Thanks, Rusty is fine. Maybe a bit blueblack :-P

OHHH, poor Rusty! That precious little thing. I know how that kind of thing can happen, though. I'm glad he's okay. :)

...and oh my gosh was he an adorable puppy!!

I remember liking the sudden tropical storms, it was the heat and humidity that followed that I absolutely hated!

Yes, he was such an adorable puppy, we had to bring him home rightaway!