While mum was in the dentist chair, I was wandering around Orchard Road which was packed during lunch hour. There were many buskers along the road. I dropped some change in a busker's hat. He was playing cheerful Christmas songs on the keyboard which injected an air of festivity all around.

Three hours can be difficult to burn if you don't have an agenda in mind. I read some gardening books at Borders, then walked into Isetan supermarket and emerged with nothing. I decided to check out Tang's baking section and ended up buying a muffin pan and measuring cup. Looks like I'll be baking more muffins in future.

Tangs is beautifully decked out in Christmas colours and decor. Check out these cute bunnies and hedgehogs! 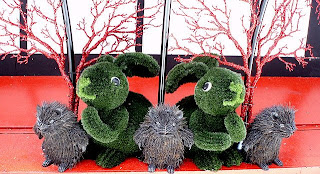 A 'lunch hour' sale was going on at Giordano. I bought a pair of black jeans for SK and some clothes for my god daughter. According to her mum, she's growing so quickly, she's probably outgrowing all the baby clothes that I last bought.

When I got back to the clinic, several Japanese patients were waiting to see the dentist. Incidentally, this clinic has several Japanese dentists and a big Japanese clientele. One lady was carrying the same handbag as me. When I was at Borders earlier, one of the staff, a teenage girl at the gift wrap counter, was wearing the same (Fox) skirt as me. Gee, I guess my taste is too ordinary.
Posted by Blur Ting at 00:21

You could never be accused of being ordinary Blur!

3hrs to roam around Orchard Rd will sure mean some shopping, otherwise it just doesn't sound right, and glad that you did :)

Ordinary? You're not ordinary he he he...

Love the bunnies and hedgehogs, too! ;-D

I agree with the rest, you're anything but ordinary ...