We have been neglecting our friday outings lately. The last few ones were spent in front of the TV with the kids, so we decided it's time to revive it before it completely disappears from our routine.

CH turned up looking very smart and handsome in his all black outfit whereas I was in a casual t-shirt, shorts and sports sandals. We looked totally mismatched and he was towering over me in his leather shoes. I looked like a little elf!

While our outfits did not match last night, our similar taste in food made up for it. I suggested Japanese food and we headed to Central, the mall with so many Japanese restaurants, we can't possibly go wrong.

There were lines outside the popular ones. We're not that fussy and are not the type to queue for food, so we walked into Kyomomoyama, a Kyoto style restaurant.

The menu is so extensive, it took me a long time to decide what to order. Finally I settled for Katsu Toji (deep fried pork cutlet in onion and egg gravy) and tempura set which came in a generous serving. The meat was really delicious but so chunky I could only manage to finish half before handing the rest to CH. We shared the chawan mushi, tempura prawn and vegetables too.

It's a good thing he ordered the sushi set or we would end up with too much food. Oh, I ordered a platter of carpaccio (mixed raw fish salad) as well instead of the typical sashimi. That was nice too. 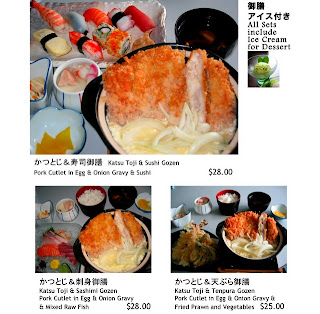 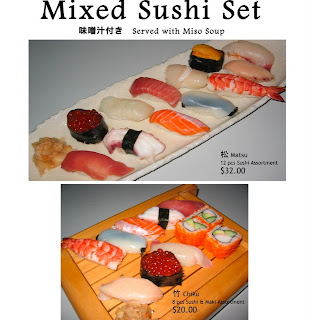 We went for a stroll along Clarke Quay after dinner. It was cool and breezy. There were lots of happy people around, soaking in the bright lights and carnival like atmosphere. I leave you with some pictures taken before and after dinner. 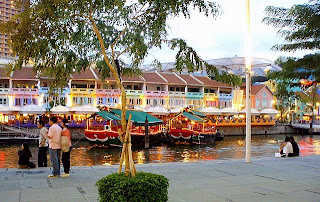 The skies were still bright when we were walking to the restaurant. 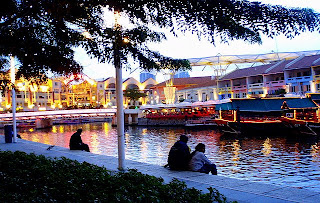 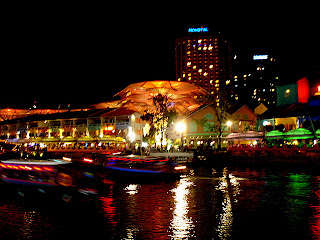 Tourists on the bumboat river cruise along the Clarke Quay. 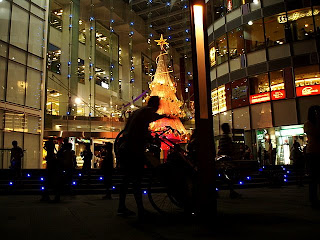 A trishaw rider parked outside the Central Mall.
Posted by Blur Ting at 17:38

Nice food and handsome company. What else can you ask for?

Looked good...and so did the food! It's nice not to give up your Friday date!

Is this mall new?

Handsome company? Where? Where?

JY - I think so too. Sometimes we get so comfy at home that we're too lazy to get out.

MH - Yes, Central is rather new. It's right opposite Clarke Quay. Lots of little shops inside and many restaurants!