I didn't go out with CH last night. He came over for dinner instead. Actually it started with a phone call. I told him I was planning on buying chilli and pepper crabs home for the boys. I had wanted to surprise them for weeks as they love crabs. We ended up at Eng Seng Restaurant at Joo Chiat Place which boasts of queues that start before 5 pm for arguably the best black pepper crab in Singapore.

Since we arrived early, we managed to avoid the crowd and the food was ready to go very quickly. CH paid a whopping $85 (about USD60) for 4 crabs but they were delicious, it was worth every cent! In fact, YK was caught licking the sweet black pepper sauce off his plate.

Friday night ended very nicely and I woke up to a bright and sunny Saturday morning. I spent a couple of hours cleaning up the garden to make space for my vegetable patch. Yesterday I bought soil from the nursery to prepare for my vegetable garden. The manager at the nursery was so nice, he gave me styrofoam boxes to plant the vegetables in. 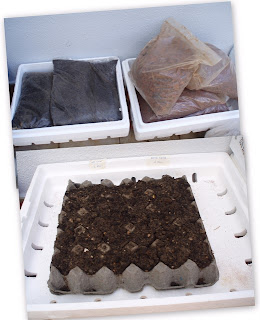 The ladys fingers have grown so much this week, they look ready for harvest but I have decided to leave them on the plant to mature so that I can use the seeds to propogate more plants in future. I can't possibly make a decent meal out of 2 ladys fingers anyway! 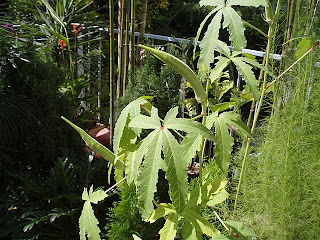 As usual, we visited several aquariums as part of the Saturday routine. The show tank at Jireh Marine is so colourful, it would inspire anyone to keep a marine tank! YK bought some corals there today. 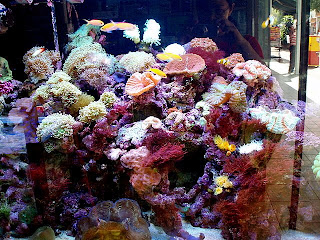 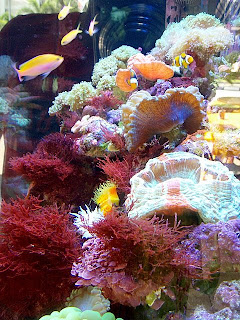 We decided to swing by Pasir Ris fish farm on the way home. Rusty and I stayed in the car as it was scorching hot outside. Here's Rusty peering out of the window. 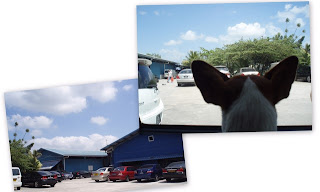 Hope you're having a good weekend. Sounds like you're off to a good start!