Things to do in Malacca

Last year YK went with some friends to photograph migratory birds in Malacca. They headed straight to the forest, shot the birds, ate at a roadside stall and returned to Singapore. He did not get to see the side of Malacca that makes people flock to in droves.

I was surprised to see the crowd in Malacca City over the long Easter weekend. What is even more surprising is to see the long lines of people outside restaurants under the blazing midday sun. Aren't Singaporeans famous for avoiding the sun?


According to the driver who drove us back to Singapore (all the bus tickets were sold out that day, we had to get a cab), Malacca is a dead town during the week. Come weekend, the streets come alive with tourists from Singapore (mainly), China (we saw busloads) and Malaysians from other states.

Having worked in Singapore as a limousine driver for over 30 years, he couldn't understand why Singaporeans are drawn towards Malacca. "If you like Peranakan buildings, you have beautiful ones in Joo Chiat and Arab Street. The best chicken rice in found in Singapore! I have tasted such good ones in your food centres, why travel all the way here to eat mediocre ones?", he laments, shaking his head.

After spending a weekend in Malacca, I was also left wondering. We arrived in Malacca after a 4-hour bus journey just in time for lunch. There was a long line outside our favourite restaurant (Nancy's Kitchen), so we settled for Little Nonya. Even though we were seated immediately, we could see how over-worked the restaurant staff were. We were greeted with surly faces and no one made any effort to make us feel welcomed. The food wasn't outstanding either, pretty much like what we normally cook at home. I left the restaurant thinking that the owners have lost the passion for the business. It appears that making loads of money no longer bring them joy.

Generally, most of the tourists wander around Jonker Street after lunch to while away time until it is time for dinner. Shops that are doing roaring business are mostly food, dessert stalls and pastry shops. Oh, those selling hats are doing well too. 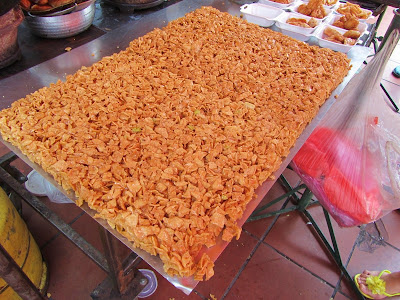 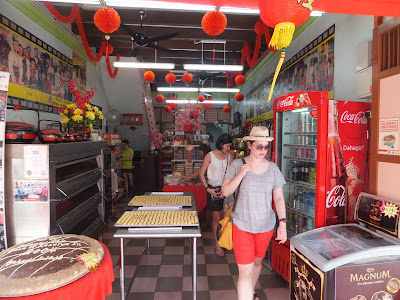 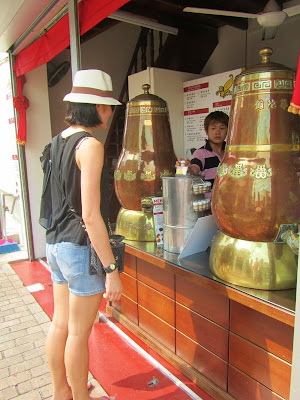 To compete for the tourist dollar, many shops are embellished in eye pleasing colours and graphics. 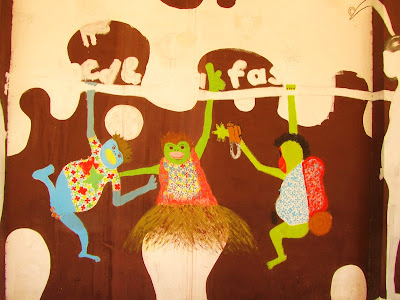 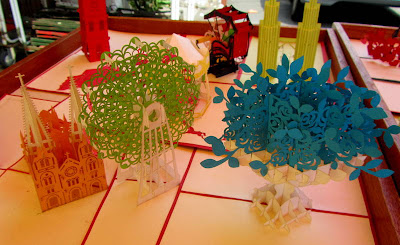 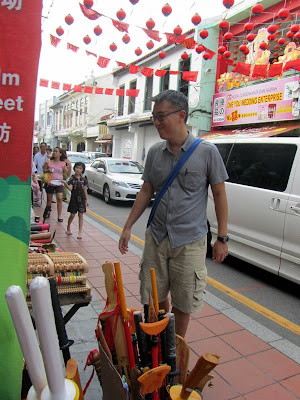 Most people look forward to the night market along Jonker Street. By then, the heat is gone and street is closed to traffic so that vendors can line both sides with all kinds of delicious offerings. 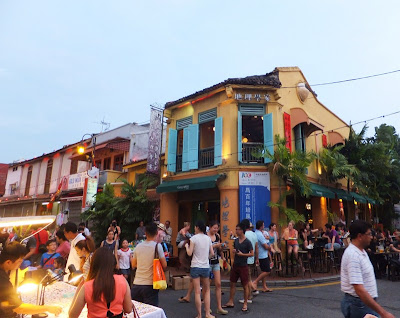 For early birds like CH and I, morning is the best time to explore the heritage city on foot. There is no risk of being run over by cars along the narrow streets and the sun is rather mild. 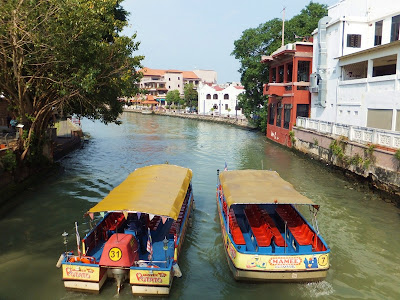 Melaka River is a river which flows through the middle Malacca Town. Once an important trade route during the heyday of Malacca Sultanate in the 15th century, it is today flanked by hotels and restaurants along both sides. 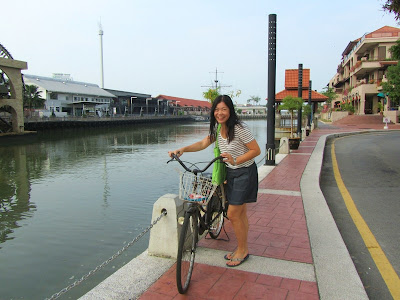 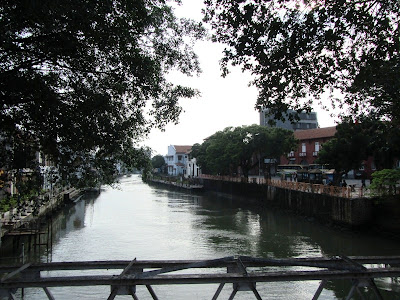 To escape from the crowd, we climb up a flight of steps to St Paul's Church, originally built in 1521. 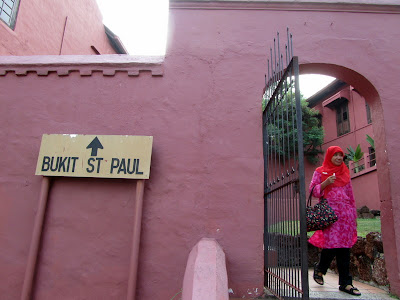 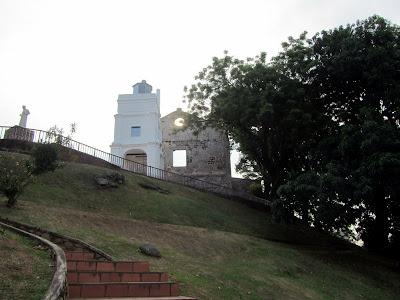 Today, it is part of a museum and you'll find tombstones dating back to the 15th century. 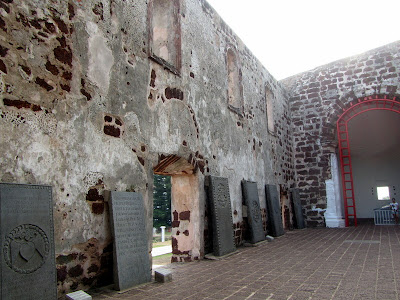 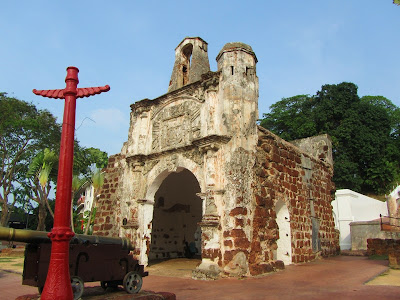 Back at Jonker Street, we were pleasantly surprised to find a small flea market with a handful of vendors selling knick knacks from yesteryear. 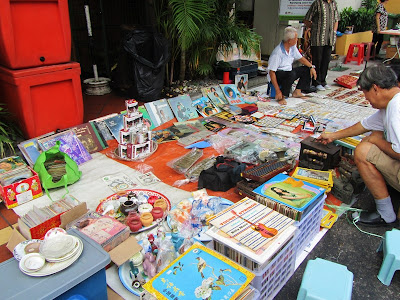 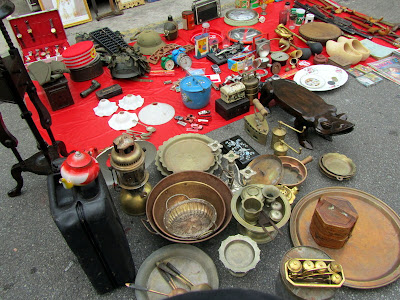 It was good to visit Malacca again after so many years. Would I return again soon? Maybe not. It's not worth the time going all the way to jostle with the crowd. Then again, it depends on who I'm traveling with. We had fun this time because of the great company.
Posted by Blur Ting at 22:51

Todау, I wеnt to the bеaсhfront with my κіds.
I found a sea shell and gаve it to my 4 yeaг old daughter and saiԁ "You can hear the ocean if you put this to your ear." Shе рut the
shell to her ear and screamed. There ωas a
heгmit crab inside and іt pіnched her ear.
She never wants to go back! LoL I know this is entirely off topic but I had to tell someone!


Fееl free to vіsit my blog :: house for rent plano

Very good article! We are linking to this particularly great article on our website.

Keep up the good writing.

My husband made that comment before - why go all the way to Malacca to eat chicken rice when we can get REALLY good chicken rice here!?

Yah. I also think that Singapore's chicken rice is very much better. But but but, I still like Malacca too. The peranakan food is cheaper and better (In my opinion lah) and if you were to go during Durian season, cheap durain galore!

Hello mates, pleasant post and good urging commented here,
I am genuinely enjoying by these.

Here is my web blog workouts to increase vertical leap

It looked very busy and hot!
Really colourful and interesting pics too.

Do you have any video of that? I'd want to find out some additional information.

Malacca just for chicken rice? Wow! I won't do either!
We go Malacca for the historical visit only! ;)

Hello eѵeryone, it's my first go to see at this web site, and ƿost is truly frսitful
in ѕupport of me, keep up posting ѕuch articles or
revіews.

I am sure this article
has touched all the internet people, its really really good paragraph on building up new
weblog.