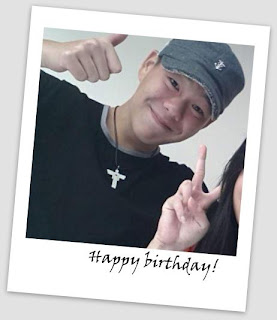 YK turns 21 today. He says he no longer needs my consent to get married. He was joking of course. But really, he is no longer a kid. For the first time in many years, he's not mugging for tests or sitting in mid-year exams. Having just been posted to the Infantry unit as a combat medic, he's adjusting to life in the army. Last week's outfield was tough but he has seen nothing yet. He is bracing himself for even tougher training ahead.

During my time, 21st birthday celebrations were such big deals and receiving a golden 21st birthday key was de riguer for the birthday kid. Of course, this dates from an old tradition that at 21 years old, you were considered old enough to be a keyholder to your family home. I doubt golden key giving is still practised today. I can already imagine YK rolling his eyes. 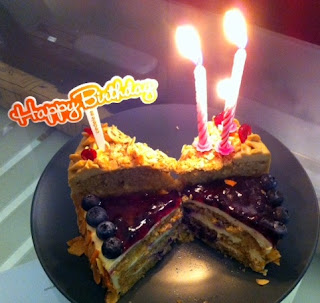 With him being away from home during the week, it's difficult to celebrate his birthday. Last weekend, I hurried to Cedele late in the night to buy a cake but only managed to get few slices. We stuck some candles on them and YK said, "No need to sing birthday song!"

Even though he's an adult now, he will always be my child and my love for him will never diminish.
Posted by Blur Ting at 22:11

His smile reminds me of yours.

Hey JY! It has been a long time! How is Beanie? Must be such a big girl now.

I'm impressed, I must say. Seldom do I come across a blog that's
both equally educative and entertaining, and let me tell
you, you've hit the nail on the head. The issue is something that not enough people are speaking intelligently about. I'm very happy
I found this in my hunt for something concerning this.