CH scored a thousand brownie points by cooking me a delicious dinner last night. Even though I know he has been making his own meals since his university days abroad, I wasn't sure what to expect.

What he made last night exceeded my expectations in many ways. Well, it's not because I have no confidence in his cooking, it's just that he's such a humble person, he doesn't go around bragging or flaunting his skills (like me). He cooks for himself daily and from the dining experience last night, I'm glad to know he makes an effort to have a healthy and balanced diet. I don't think I would be so vigilant about my nutrition if I were living alone.

He also brought out a bottle of Californian rosé wine. As you would imagine, the dinner was perfect. The food was so yummy, I kept asking him for cooking tips until he felt a little embarrassed. Apparently, his cooking style is quite different from mine.

The best thing about dinner last night was not having to lift a finger to help. He did the all the cooking, serving and washing! Boy, it felt so good to be pampered. 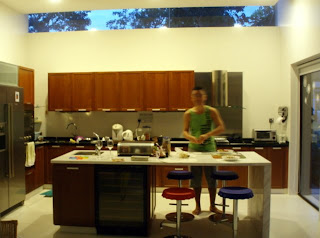 CH working hard in the kitchen. 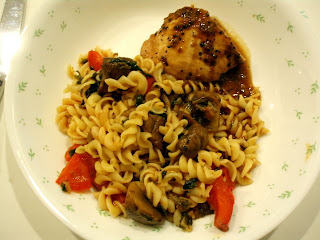 Here's what he made. Pasta cooked with capsicum, portobello mushroom and spinach, served with tender and succulent black pepper chicken. I was so impressed with his culinary skills! 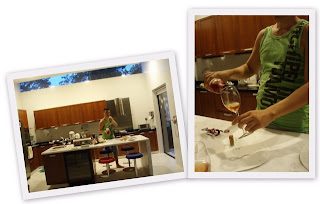 We had rosé wine too. He can be so romantic! 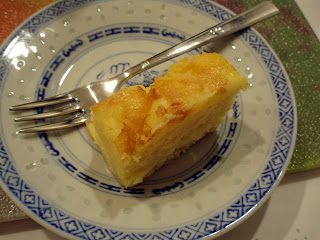 What's dinner without dessert? I bought the famous Camembert cheesecake from the Hokkaido Fair in Isetan. It was really good.

You deserve to be pampered after all the pampering you do.
The food looked divine. My kind of meal! Nice kitchen too.

You are such a fortunate girl, Ting! I'll melt into water if my man can cook me such a nice dinner ^__^ wow CH wow!!

The food sure looked delicious! Way to go CH! :)

Simply love the kitchen which seems to have come out of an ID mag!

Wow! So romantic! By the way, this is Bev, Ting Ting. Just in case you wonder who this is. :) See you this Sat I hope!