Dogs have feelings too

I have a special affinity for dogs. Even though I had been bitten by dogs twice in my life, my love for them has never changed. I see sweetness in every dog's face, even more so if they are strays in dire need of help.

If you understand dogs, you will not fear them. If you are gentle and kind towards them, there is no reason for them to atttack you. They do so only when they feel threatened and believe me, the strays have every reason to be defensive because people do not treat them kindly.

When I first met Bodhi, he was just a pup. Can you imagine how adorable he looked as a black and white pup? He must have been bullied because he was so afraid. He hid in the undergrowth all day and ventured out only when the coast was clear. He would never allow anyone to go near him let alone cuddle him.

He had every reason to fear because even though he never caused any trouble, the AVA sent four big men with steel wires and lasso to capture him one day. His life was spared when my parents adopted him.

As you can imagine, getting him to my parents' home was a mammoth task that required many days of strategising. We finally got him settled into his new home. It took months to earn his trust again.

It helped that we had Harry, our other adopted dog, to keep him company. Even though Harry bossed him around and gave him a hard time in the beginning, it was heartwarming to see Bodhi trotting behind little Harry like a gentle giant.

In three years, he grew so close to Harry that whenever Harry went to the vet, he would run around the yard looking for his little friend. He was always overjoyed at Harry's homecoming, showering him with affectionate licks and nudges.

Harry's sudden demise has been hard on Bodhi who at this point is not aware his best friend had gone to doggie heaven. Seeing him looking desperately for his bestie breaks my heart. He came towards me looking for answers. I tried to comfort him only to hear him whimper. Then he ran towards the garden again, searching and whimpering softly hoping that Harry could hear him. 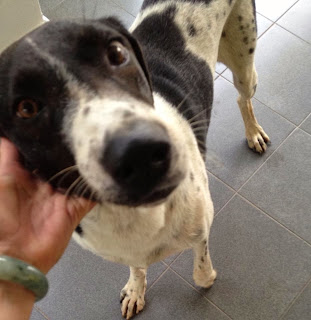 My condolences on the passing of Harry and I feel for Bodhi. Poor fellow. Dogs are the most loyal and friendliest of creatures on this earth and I'm sure Bodhi must really miss his best pal.

May Harry rest in peace at dogs heaven! Hope Bodhi will soon accept it!

hello. My name is Lyric. I’m not your average girl.