Grouchy as a bear

How difficult can it be, shopping for a new dress?

The simple task, which used to take all of 15 minutes, has become such a monumental effort, I have been wearing the biggest frown all week, even CH has carefully kept his distance.

It was such a silly self-imposed punishment really. Nobody said black is not allowed at the wedding. Or white. It was just an excuse to makeover my wardrobe.

And being a glutton for punishment, I made myself march in and out of malls every other day, try an assortment of ill-fitting clothes and ended up buying a bunch of stuff that I might not even wear.

The trauma of seeing myself in the dressing room mirror has made me go on a crash diet, in a hasty attempt to lose some weight before the event this Friday.

I've even resorted to rummaging through mum's wardrobe and her stash of pearls. Being the ever supportive figure in my life, she said, "Aiya, who's going to look at you? Just wear anything decent lah."

But she doesn't understand. CH's family members and beautiful nieces (6 of them!) will be there in their designer best. (Tell me I don't have self esteem issues.) Sometimes I wish I have a teenage daughter to pinch clothes from. Anyway, last night, I tried out all the potential outfits and paraded before my son.

"This one's ok, especially with the necklace. But wait, I think the skirt's too short. Nah, too skanky. Next!"
"Umm, this makes you look slim, but Bree from Desperate Housewives likes to wear dresses like that. Nah, you'll look like a housewife."
"The green one is clearly out!"

Say what you like, but black is the only colour that flatters me. Finally, I have decided on a dress which I bought in Hanoi last year. All my girlfriends said it looks good on me. It's quite classy and nice (and black of course), with stones embedded on it. 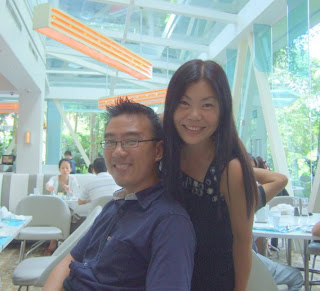 Now why did I waste all that time running around all week? Let's not even talk about the money spent on the newly acquired stuff that didn't quite make the cut.

My tummy is growling now as I write. A hungry woman is an angry one. Thank goodness the wedding is bearly, I mean barely, 48 hours away. This hunger strike is killing me!
Posted by Blur Ting at 20:14

Hmmm... you are being too tough on yourself. You look stunning in that picture and you have a lovely smile.

That dress is a good pick, the coloured stones will attract the eye and give some interest... and the black flatters your colouring because your hair and eyebrows are so very black.

Thank you Petunia. I am too weak to do anymore shopping.

I once went to a wedding reception & the bride was wearing a black evening gown - so no prob with black! But I can't help smiling as I read your post - things we do in the name of vanity :-)

if u wear black, then wear some blings, jewelry. can consult the staff too on what looks good on you & what to go with.

always try to look younger than your age.

and yup, that dress looks good on you!

I think you look good. Can understand what you mean by buying things you don't need because I've got lots of those. Forget abt losing weight lah.. is better to be happy and smiley than hungry and frowny.. :) Plus, I really don't see why you need to lose weight

It helps to drink a lot of water when you are hungry... It clears something called ketones outta your body. Also, it helps to down a packet of Fybogel every morning on an empty stomach. Your body continues to clean the bloodstream etc of toxin and this is secreted as bile into your gut. Fybogel will bind all this goop together and you will then clear it when you go loo. Once the toxins are cleared from your body, you'll maybe feel a little better.

You don't look good, you look GREAT, you have a lovely smile and make people around you comfortable :)

Beauty comes from within....! Which we all know but not helpful in times of wardrobe crisis! But you look good in black so wear it!!!