Today is the eve of CH's birthday and finally, he is willing to open his presents. He's traditional like that. So far, he has received a pair of binoculars from me, torchlight from his best friend and a membership to St Andrews Society from Patricia.

I've been counting and this is the 9th time I've celebrated his birthday! That's how long we have been together. I remember that first year, I made him a scrapbook of us. Looking back, it feels silly. Now I realise he's not into such things. Over the years, I've planned trips, staycations and surprises but this year, we're keeping it low key. 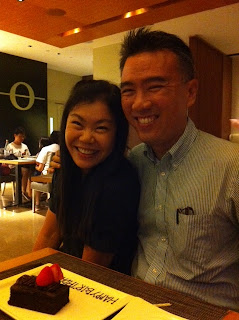 He's a blessed guy and each year, there is no lack of friends and family celebrating with him. Just the week leading to his birthday, he has had joint celebrations with Chris and Patricia, who are all July babies.

CH is a great guy which makes him a very likeable person. If more people can behave like him, I am sure the world will be a more peaceful place to live in.

I have never seen him lose his temper or raise his voice at others.
He is never judgemental or critical of people.
He is highly tolerant of my moods and nonsense.
He doesn't gossip or indulge in idle talk.
He is confident and is not bothered by people's opinion of him.
He is considerate and is never late.
He is well read and very knowledgeable.
He eats everything I cook whether it is delicious or not.
He loves my dog and treat my kids well.

Like everyone else, he has some shortcomings too. But since it is his birthday, I will not go into that.
Posted by Blur Ting at 20:27 7 comments:

The kids calls their paternal grandma Mah-Mah and stay in touch with her via phone calls. I've come to know that she sends them SMS too. I never knew she could send SMS until yesterday.

She helps out at the drinks stall in the school canteen and is very popular with the teenagers. She can be naggy but is a fun person to be around with. Whenever she wants to send a message, she enlists the help of the school kids. No wonder her SMS to YK sounded funny, "乖 孙. 你的 肤色 好点 了吗?" ("My well-behaved grandson, is your skin better now?")

That was when she found out that YK had a terrible outbreak of rashes after field camp. When she heard that YK will be leaving for training in Taiwan next week, she asked to see him before he leaves. That was why we had dinner together last night.
Sometimes I can't help but see a reflection of myself in her. She's a single mother who worked as a cleaner to bring up 4 kids. She was bullied by an ex-husband who not only didn't lift a finger to help raise the kids but continued to harrass her even years after the divorce.

Despite the hardship and struggles, she's jovial and full of life. She may not be very educated, but is extremely street smart and wise. She knows when to say the right things and until now, has never taken sides with her son who is my ex-husband. If anything, she blames herself for not raising him up properly. But really, under those circumstances, who can blame her?  Given the bad neighbourhood they were in, it is a miracle none of them ended up as criminals.

He was charming and intelligent. And I was young and impressionable. We might be the same age but he was miles ahead of me in terms of guile amd charisma. Being the creative sort, he had a million ideas brewing in his head. I was good with words and he was great at making an impression. We made a great team, a little like Nigella and Saatchi.

I used to admire Saatchi for his immense talent but when news of him bullying Nigella surfaced, I immediately rooted for Nigella.

It is no surprise that it was Saatchi who filed for divorce. She probably didn't dare to. I love Nigella and want to see her back on our TV screens, so beautiful, happy and full of personality. Now that she doesn't have to live in fear of  the husband, she's already on the way to a better life.
Posted by Blur Ting at 21:15 4 comments:

If you enjoy nature, Upper Peirce Reservoir is a really nice place to spend a relaxing weekend away from the crowd.

This used to be our favourite hangout when the kids were younger. It's been years since we last went, and I'm glad the place hasn't changed at all.

It was hot though, so blazing hot that it was impossible to hang around too long. It was never that hot before. 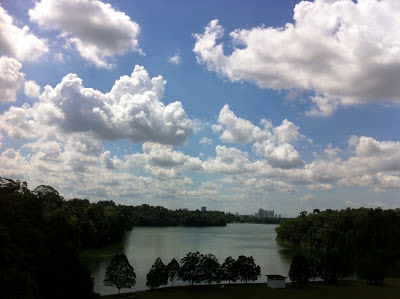 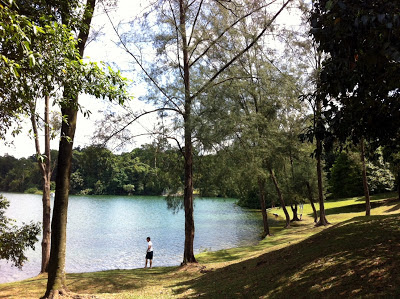 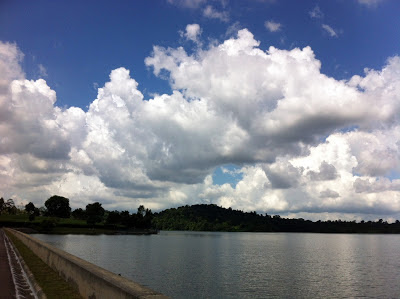 As I ended the conversation with a client, Jay Chou's hit Superman can't fly comes to my mind. To many people, I'm a super woman. I run a business, a household. I plan trips, meals and celebrations. I take care of everything to the best I can. I feel like Super woman but now I feel like crying.

In business, I like to think that I have good foresight but sometimes I'm just a little bit ahead of my time. It's good to have that edge over others but it can also be such a struggle. Recently I met an  expat living in Singapore. His industry knowledge and professionalism is astounding but unfortunately he's fighting a losing battle with the cut-throat competitors. I can totally understand how he feels.

That's the way it works in SIngapore. Jobs are awarded to the lowest bidder. Many companies don't value people like us enough, people who give the right advice and offer the best solution, people who want the best for our clients.


Sometimes I wonder if what I'm doing is worth it.
Posted by Blur Ting at 19:45 6 comments: