I'm glad everything went according to plan today, even the weather was nice and cool all day. We set off at 7.30am. After breakfast at the food centre, we drove into Sentosa. I haven't been there for several years and the idyllic Sentosa that I knew has certainly undergone major changes.

For a start, half the island is undergoing major redevelopment, from the building of the integrated resort to upgrading work everywhere. It's still a work-in-progress, I wouldn't say this is the best time to visit Sentosa.

We saw some new attractions like the Song of the Sea and a whole lot of new retail and food outlets, but somehow we couldn't feel the excitement. Sentosa has always marketed itself as a fun and exhilarating place to be at but I think it is too manicured and contrived, lacking in character and spontaneity found in other island resorts in S.E.Asia.

Since we were only going to spend the morning there, it didn't really matter. Judging by the neglected state of the jungle trail, I can say that it is obviously not very well used. It's a short one though which took all of 10 minutes to complete! We went and sat by the coast after that.

While Sentosa is trying so hard to make this little island into a world-class resort, the only thing that we never get tired of doing is sitting under the shady palm trees, enjoying the breeze, watching the clouds and hearing the sounds of waves pounding against the shore.

We don't need swanky clubs and fancy restaurants, just the simple pleasures will do. 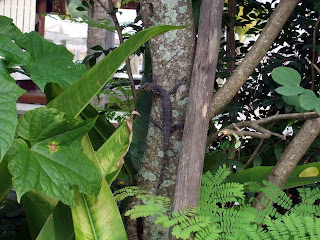 We spotted a young monitor lizard on a tree trunk. With all the redevelopment going on, it will soon lose its natural habitat. 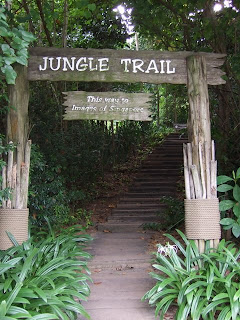 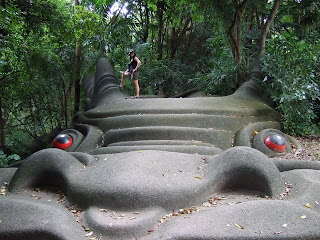 The dragon trail -meant to add a touch of legendary mystery to the natural surroundings. Quite cheesy. 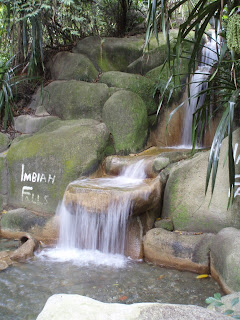 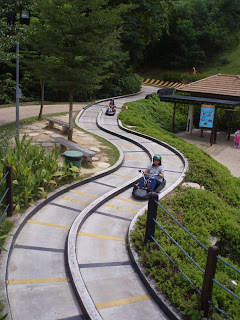 The luge - a kind of gravity ride that was supposed to be very exciting but... 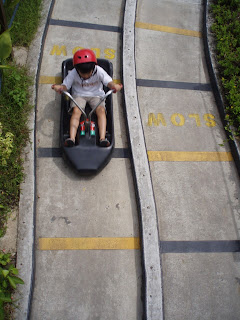 They were going down so slowly, I almost fell asleep watching. 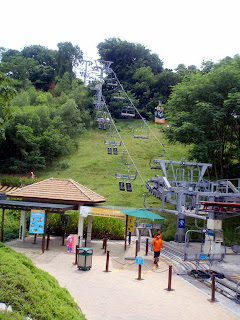 The skyride that takes you up to the top so you can ride the luge down. 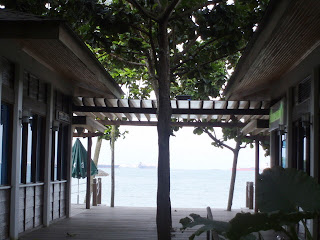 Retail outlet on the left, Japanese restaurant on the right. 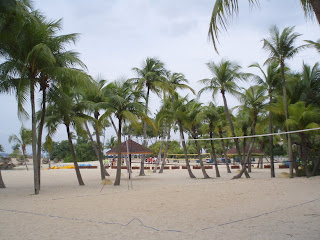 The (man-made) beach was rather quiet this morning. 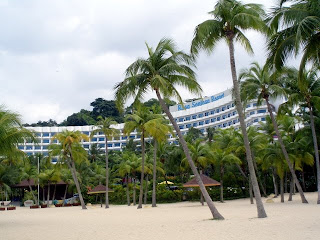 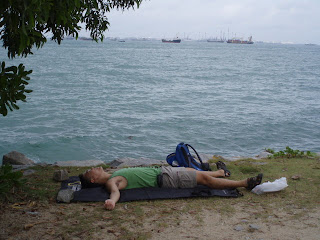 Finally, we could relax by the beach! 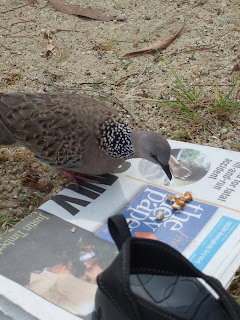 We even had a visitor... 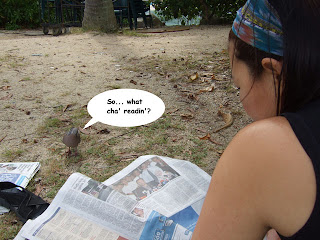 Looks like you had good fun. I love the beech photo. :-)

I've been offline (on and off) for two weeks with computer troubles so I'm way behaind AGAIN. I hope to get my holiday photos up this coming week.
...fingers crossed and putting good luck charms o top of computer! ;-)

I'm glad all went according to plan. Looks like you had a lovely day together.
Great pictures.
I didn't know birds could talk?!

That was the least shy Spotted dove I've ever seen. It started circling us at first, coming as close as arm's reach. Couldn't quite get it to eat out of my hand though.

Looks like a fun and meaning way to celebrate the birthday :-) .. Happy Weekend!

Ahhh what a great way to spend his birthday.
I haven't been to the luge yet. Heard that young kids love it though :)

Ahhhhh...changing all the time, eh? I'd love to visit Sentosa again sometime, though...but you're right...it's not good if they get rid of the nature bit too much.

Usually I don't learn article on blogs, but I would like to say that this
write-up very pressured me to take a look at and do so!
Your writing style has been surprised me. Thank you, quite great article.

Fantastic beat ! I would like to apprentice whilst you amend
your site, how could i subscribe for a weblog website? The
account helped me a acceptable deal. I have been a little bit acquainted
of this your broadcast provided bright clear idea

You can definitely see your enthusiasm in the work you write.
The sector hopes for more passionate writers like you who aren't afraid
to say how they believe. At all times follow your heart.