I was back in Siem Reap city over the weekend. This time I traveled alone and stayed in the charming Villa Medamrei, a four-month old boutique hotel near the Old Market. Traveling alone has its charms. I did whatever I liked and wandered around the city like the intrepid backpackers around me.

The weather was hotter than I remembered and the roads were even dustier than before due to the damage caused by the floods in September. I walked around the city alot but had little appetite in the oppresive heat. Hence lunch was mostly cold light food like vegetable rolls and glass noodle salad. 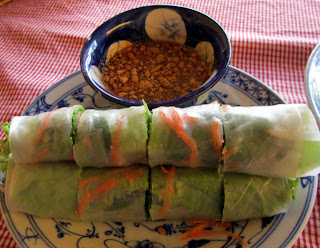 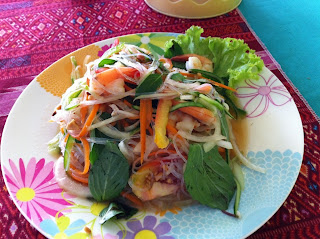 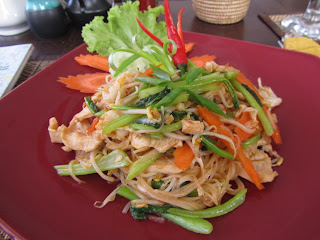 The morning sun here is glorious though. 7am is my favourite time of the day because of delicious breakfast and hot cuppa. 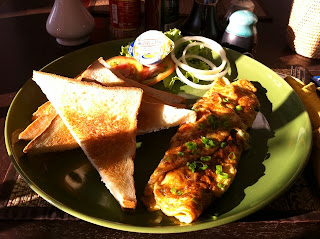 The sun is also at its kindest and everything just perks up in the soft warm light. 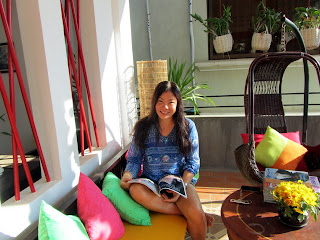 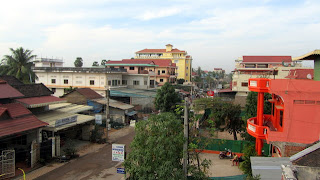 By the time I leave the villa at 10am, the sun has turned into a harsh ball of fire. The heat sears the skin and fries my hair. I always walk quickly, kicking up dust as I dodge tuk tuks and bicycles. 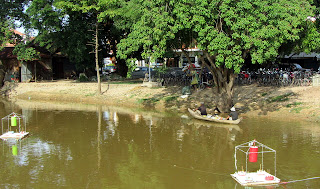 I like walking along the river even though the water is of the murky kind. Every morning, two people row a wooden boat, collecting trash in the river. 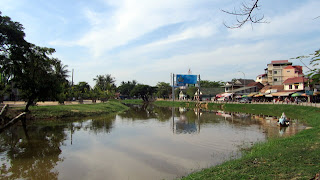 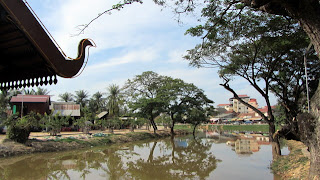 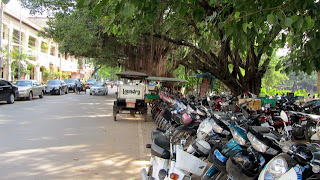 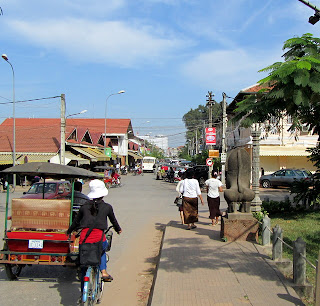 Even though the river is nothing like the River Seine or Rhine, the waterfront properties flanking the water are notably more prestigious. 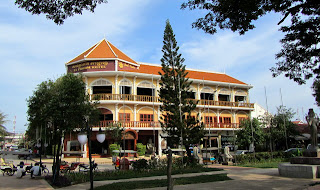 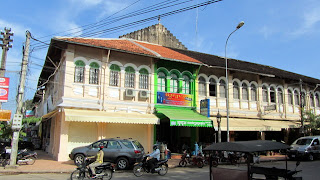 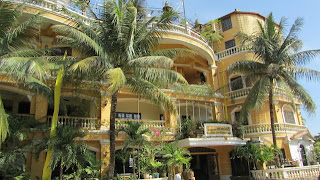 On a typical Sunday morning, before the tourists start hitting the town, the local markets are bustling with women jostling and haggling over vegetables and fish. 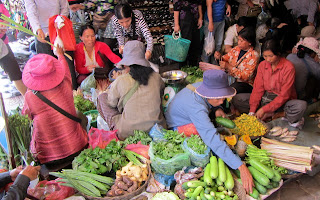 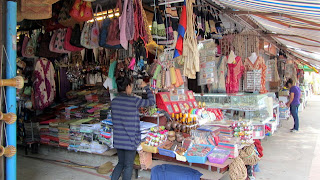 With the sun beating down on me, I longed for a cup of ice cold sugar cane juice but didn't want to take the risk at the streetside store. I settled for an ice cream at Swensons instead. 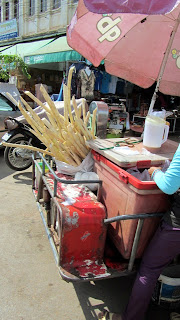 Some of the local food are downright intriguing. According to my friend, the small shell below is a cheap and popular delicacy. 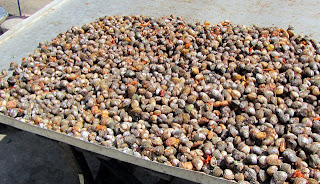 Quail eggs are popular too. 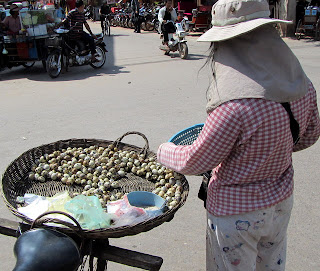 Most Cambodians are Buddhists, so you can find pagodas everywhere. Pagodas are the monks' abodes. 'Temples' are places of worship for the king, like the Angkor Temples.

During my walk, I came across two pagodas near the river. Coincidentally, I saw two monks walking into the gates after collecting their morning alm. In case you're wondering, that is a statue of a man (with a broken arm) with a sign telling people to remove their hats before entering. 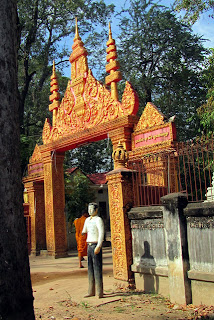 The other pagoda is a very grand one with intricate carvings and ornate finishings. I wasn't sure if they welcome visitors, so I just took some photos quickly from outside. 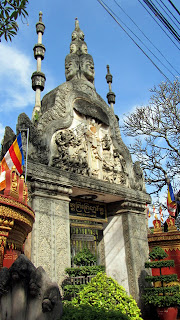 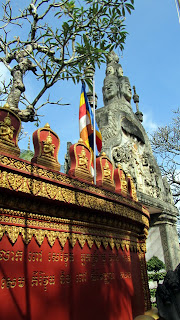 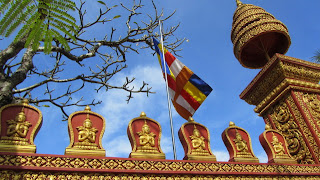 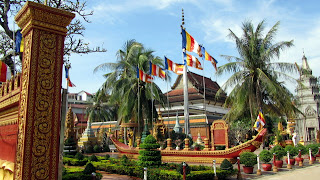 By noon, I was forced to retreat back to the hotel to escape the scorching sun. That is when most locals have their siesta on the hammock while the tourists nurse their ice cold beer in the cafe.
Posted by Blur Ting at 18:37

Hi Ting! U are very brave to travel to Siem Reap alone, tho it seems you do have friends there. Also, none of your pix show poverty. Is there none there?

Auntie Lucia - Haha, I have traveled to many places alone and strangely, have never felt fear.

There is widespread poverty in the villages. Many families are too poor to bring their own kids up, hence they send them to orphan centres. The centres house not just orphans but many kids from such families.

Siem Reap City is quite prosperous because of tourism. The government wanted all the beggars out of the streets during their urbanisation plan, hence the NGOs swooped in and brought all the beggars to their centres and homes.

I came across a few beggars in the city. They would come asking for money when you're eating in a restaurant but they're not so persistent. Also, the restaurant staff are very tolerant and will not shoo them away.

Thanks Nicole! I'm glad you enjoyed the photos.

nice photos and the kids are so lovely!!

Can't wait to visit there in dec 2!

Having read this I thought it was extremely enlightening.
I appreciate you finding the time and effort to put this content
together. I once again find myself personally spending way too much time both reading
and posting comments. But so what, it was still worthwhile!

Hеуа i'm for the first time here. I came across this board and I find It truly useful & it helped me out much. I hope to give something back and aid others like you helped me.

You actually make it appear so easy along with your presentation however
I find this matter to be actually one thing that I believe I'd by no means understand. It sort of feels too complex and very vast for me. I am looking ahead to your next publish, I will try to get the dangle of it!

thank's great suggestion, you are much better compared to samsung's
engineer !!!

If you wish for to improve your knowledge simply keep visiting this site and be updated with the hottest news posted here.

This is a good information regarding Postscript limitcheck
errors. I do have one concern, however. You state not to publish utilizing a printer queue.
Could you clarify your explanations?

eToro is the #1 forex trading platform for newbie and advanced traders.