SK is coming home today, after being away for 18 days on a trip to Australia. He flew alone to Bangkok to meet his father, from there they set off to Melbourne and Tasmania. SK has been keeping me updated of his whereabouts via email and sms. Tonight, he'll be flying back from Bangkok alone. I'm so proud of him!

It's funny how when the kids were young, they had to depend on me for everything. YK was so fascinated with marine life as a toddler that he would pester me to draw sea creatures for him. Well, I'm not exactly the most artistic person, so very often he would cry out of frustration when his beloved creatures looked mishappen or unproportional. He was quite the perfectionist with high expectations.

Both my kids are very artistic, eventually they could draw so well, I was relieved of my drawing duties. SK almost always gets a distinction in art and has decided to pursue his studies in environment design which I think suits him perfectly since he is also a nature lover.

It's the same with cooking. They love pasta and would make me cook pasta for them all the time. Now, YK makes his own pasta and believe me, they taste so much better than mine. He bakes pies, tarts and muffins too. Last week, he made chocolate cupcakes on a whim and they turned out to be the best I've ever eaten.

Eating freshly baked chocolate cupcakes is really different from eating store bought ones. YK used good ingredients in generous portions. The cake turned out moist and so chocolatety. For the icing, he used marshmallows, cream, rum and dark chocolate. Oh, the taste was heavenly! 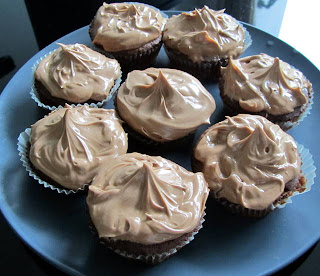 After slogging away for so many years, it's now time for me to sit back and enjoy the fruits of my labour.
Posted by Blur Ting at 17:25

You're super mum! I must learn from you!

Your children are blessed to have you as a mother...and my, your boys have grown indeed.

Indeed you can now start enjoying the fruits of your labour, Ting...thumbs up for you and for your sons! :-D

Oh... your boys are so capable! That's because you are a super mommy and now, your can enjoy the fruits of your labour. Enjoy enjoy! And yah, the cupcakes look heavenly... *drool*

Glad you're enjoying the fruits of your labour. And it seems to me they have grown into sensible and thoughful boys.
That icing sounds incredible!