Harry was recently hospitalised for an injury in his back. We're not sure how he got himself injured at the farm (we suspect he got into a fight with the other farm dogs) but he's recovering well after treatment. After a close shave (pun intended), he looks nothing like a Japanese spitz. 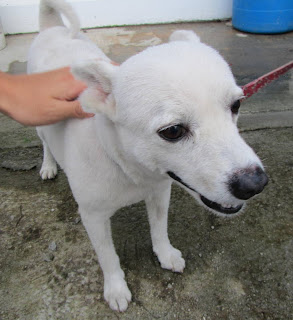 Rusty used to get into all kinds of mischief and skirmishes while living at the farm. Now that he's dwelling in the apartment, we have to keep him occupied.
﻿
﻿

Aw Rusty is so cute!

He's enjoying the carrot! So cute.

Rusty is a toughie with a soft life... but he swaggers everywhere with a sense of his own latent potential for violence and Top Doggishness. Man... Rusty is some dog. Even though he looks a bit sissy chewing that carrot. :-)

Petunia - Yes, he is small but macho and will not hesitate to pounce on an enemy.

He eats raw celery too.