The kids and I were reminiscing about our dogs that day. When Rusty first arrived, he was tiny as a kitten and we almost named him Felix (the Cat). Luckily we settled on Rusty because of his rusty patches, also because he's a Jack Russell Terrier. 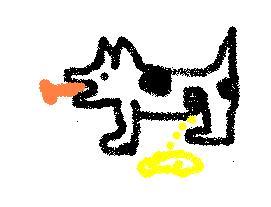 Strangely, when I bring Rusty out for his walks, many people call him "Milo" (from the film Mask). It's funny because the movie was released some 20 years ago. YK used to watch it over and over again when he was still crawling on all fours. Milo is quite an unforgettable character! He's nothing like the other Milo I know - Petunia's hunky dog who is more of a Scooby-Doo look-alike.

Scooby is a nice name but one of our favourites is Spooky, my brother's mixed bred which died five years ago. There's nothing spooky about Spooky at all. He was very intelligent and such a good looker, one of the best dogs we've ever had.

I admit we're not the most creative when it comes to naming our dogs. After we had Rusty, we named the stray mongrel that came to live with us at the farm Jack. Then another black and white one came and we called him Russell. Just when we thought we had enough, along came one with a beautiful coat of chocolate fur. He was such a sweetie, the name Cookie sprung to my mind. Sadly, all these farm dogs have gone to Dog heaven. Now we've got Harry (cos he's so furry) and Bodhi (my friend named him).
We're not the only unimaginative ones it seems. My cousin was lamenting about the names of their dogs. Their late miniature pinscher was named Skinny. If you know what a pinscher looks like, you'll go 'duh!'. Then there's stray who is lucky enough to be adopted by them. Naturally she's named Lucky. When Lucky gave birth to a litter of pups, all were adopted except for the rotund brown one who lives with them now. Yes, Brownie's her name.

Rusty is not the only Jack Russell Terrier in our neighbourhood. We have a Milo and Tutu living in our block. There is one called Toffee who lives down the street and a Rocky, who looks so much like Rusty.
I like the name Coco but it's fairly common around here. There is Shasha the gentle Husky who loves Rusty a lot and her partner Gen, a gorgeous Goldie. Then there is Waggy, the friendliest labrador in the neighbourhood and the cheery American man with his three Ds - Dumpling the Cocker Spaniel, Daisy the Goldie and Dolphin the Japanese Spitz. (below)
While some breeds are common, there's only one Rocket - the funny frowny sharpei who lives round the corner.

Looks like your blog is going to the dogs. : )

Yes, in all ways. From bad to worse.

I so very enjoyed this post. It kind of ran along like one of my favourite songs from Mary Poppins. So cute! Aiya! Some people can't see their own gift for writing even when it stares them in the face!!

Hi, we have a dog looks like Bohdi. So much alike that we thought it is ours, Oreo. We named her after Oreo due to the black patches on her. Now we wonder if they are siblings and separated at birth. We would like to know. Let's get connected if you are ok. :-)

Hi Constance
Bodhi was abandoned as a young pup at the open field behind Anglican High School. For many months, few residents took care of him. He was extremely timid and wouldn't come close to people. AS he grew bigger, someone called up AVA who attempted to capture him. The residents begged for more time while we tried to find a home. It wasn't easy, so I ended up bringing him back to my parent's home.

You can read his stories here

One day when I get a dog, I'll probably name him/her Kitty Cat :)

Thank you for sharing more about Bohdi, Ting. For ourselves, we adopted Oreo when she was a pup too. We found her sleeping under the table in coffee shop in Yishun. There were some paints on her tiny body then. Both Bohdi and Oreo really look alike in many ways. They could be siblings..very high chance. If there is a chance, I can send you her pictures. :-)
Take care!

Hi Constance, yes, please send me photos! Is Oreo a big dog? Mine is really big boned and tall.

Hi Ting, yes Oreo is a big dog. She has long legs..yes, tall too! I will send her pictures to your gmail account soon. I am very sure they could be siblings.

I will name my dog "Mojo JoJo". The villian monkey from the Cartoon, The Power Puff Girls. ;)