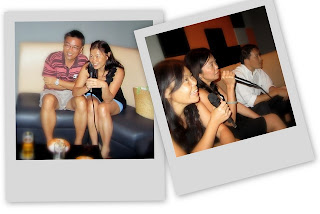 Just as I was getting ready for bed last night, Best Friend called urging me to join her for karaoke session at Temasek Club. While one part of me was reluctant to leave the comfort of my home, the other half was game for a night of fun. I dragged CH along of course.

She and hubby were warming up their vocals when we arrived. We settled down quickly and started picking songs. By the time our beer arrived, we were already belting out 我問天 at the top of our lungs.

While I had been to karaokes before, last night was the first time I actually sang. It was a night of discoveries:
1. CH has really strong vocals but he's a reluctant singer
2. Best friend excels at singing Hokkien songs
3. Her hubby likes Bee Gees songs
3. I suck at singing

After discovering how tone-deaf I am, I have new respect for good singers. Anyhow, we enjoyed ourselves tremendously even though I was mostly out of tune. It's a great way to let our hair down and enjoy the commaradie.

I pity the service staff though. They had to put up with our bad singing whenever they sent in our beer!
Posted by Blur Ting at 23:20

Karaoke is a very forgiving medium, esp if u don't switch off the vocals. I've often been told, "L u have many talents but singing is not one of them", even by mum, but I don't care. I sing whenever I want to, esp at karaoke

We mostly derive pleasure from laughing at each other.