Last week, I was so sad to hear of our neighbour's chocolate labrador Coco's sudden death. I've always had a soft spot for gentle Coco. She was the same colour as my old dog Cookie, and she had the sweetest temperament. She was only 9 when she died, leaving behind her son Storm (below). 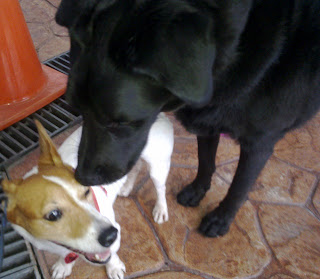 Several years ago, Coco escaped from her ground floor apartment and returned home pregnant. Subsequently, she gave birth to several black puppies. One, called Patches, is a gorgeous black dog with a white chest who lives nearby.

The other, called Pinkie, was given away to the owner's friend who recently wanted to give the dog up as she was about to deliver her own child. Nobody wanted to take in a big black dog, so she was contemplating putting Pinkie to sleep. How cruel!

Even Coco's owner couldn't adopt Pinkie for she already has 3 dogs and a cat in her small apartment!

I'm quite sure that Coco could sense what was happening and couldn't bear to see her own child being euthanised. So she did the ultimate sacrifice. Now that she is gone, Pinkie is coming to live with Storm. 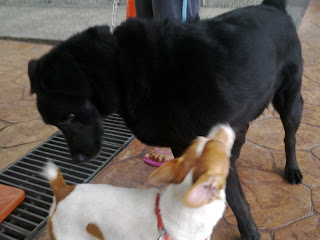 Animals are like human beings. They have feelings too. Storm used to be a rascal. When his mother was around, he swaggered around like a bully. He growled and barked incessantly and often lunged at Rusty. We always kept our distance.

Something strange happened the day his mother died. He completely changed into a sweet dog. According to the maid, now he listens to instructions and has stopped barking at people. He must still be grieving for he walks around forlornly, sniffing here and there for his mother's scent.

For the first time yesterday, he was friendly with Rusty. Both dogs were sniffing each other, with tails wagging like good old friends.

We think Storm grew up the day his mother died.
Posted by Blur Ting at 20:28

So sad! Why did coco died so suddenly I wonder...

Such a sad but sweet story

Yes, Coco was active and healthy. Then suddenly she became ill and died the next day. So sad.

Blur, the way you've written about the dogs u know makes me wonder when u are going to turn vegetarian! Or r pet animals more humanised than food animals?

What a story. Sorry to hear about Coco. But I am glad they are sniffing each other and friends now.

Lucy - Well, I have not considered turning vegetarian but I don't really eat a lot of meat.

I spend so much time with dogs, I really understand their behavior. Actually I have not come across any dog that had been aggressive towards me. I believe that if you treat them well, they in turn feel untreatened and will be friendly towards you. In fact, dogs are so loyal, grateful and non resentful, human should learn from them.

This is very sad story!
How come the owner of pinkie can be that cruel to put him to sleep!
Hope pinky will be happy with storm!

Malar - People like this should be banned from keeping pets.

Storm is a lovely name... And he looks so handsome.