Alive and kicking in SoCal

Hey folks, thanks for your well wishes. I am well and enjoying my stay in Orange County. The kidney problem has been resolved and life is back to normal and I've been drinking more water than ever.

YK has been busy, so I had plenty of time to wander around and do anything I like. I didn't rent a car and had to rely on the hotel shuttle to bring me to places within 5 miles from the hotel. DisneyLand and the other major attractions are more than 10 miles away, so I'm not going there. There are several large malls nearby (South Coast Plaza and Fashion Island) which I had already gone and bought lots of stuff.

Last night the kids gave me a new list of things to buy, so it looks like another trip back to the mall is very necessary. I don't mind actually cos I want to try some of the good restaurants in South Coast Plaza. It's autumn, so I am going to treat myself to truffle. I would like to go to somewhere scenic like Balboa Island to do some sightseeing instead of just hitting the malls.

I took some photos of the koi pond at Fashion Island yesterday. Everyone seems to rave about this but we have plenty of large ponds like this back home in the tropics. I was supposed to see lots of fashionable types walking their dogs here. Maybe I was there early for I didn't see many. The fashionistas must still be having their beauty sleep or getting the hair done. 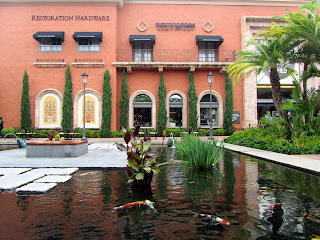 After a couple of hours at the mall, the hotel shuttle came back to bring me to South Coast Plaza. The coach was 10 minutes late, so I took a photo to show you how SoCal (Southern California) this scene is....the palm trees, blue sky and dry air. 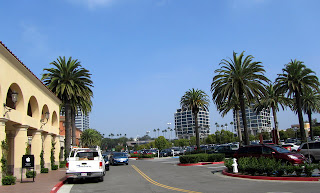 While the air is so bad for my skin, I love how it makes my hair so straight and well behaved. See, it can never be so shiny back home. 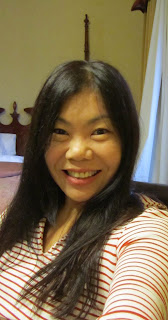 I found a magazine in the hotel room that featured some good restaurants in South Coast Plaza and was glad I managed to find ZCafe, known for its farm fresh fare. The rustica pizza with button mushroom, pepperoni and delicious sausage flavoured with loads of rosemary was the best I've ever had. Even the crust was so full of flavour (I tasted herb and spices), I cleaned up the entire plate! 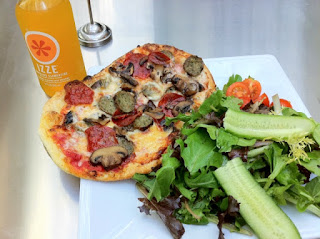 Oops the post got stuck halfway and i couldn't seem to end the story. Will try to complete it later today.

Yay! I am so glad you are enjoying yourself!!

Glad to hear that all is well. Take care & enjoy your break.