Maybe I had too much time on my own, I made it a point to eat well this trip. I must admit that I ate more than necessary, sometimes out of sentimental reasons like the cheese burger at In-N-Out. 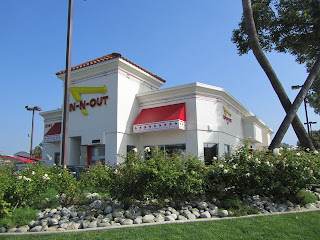 Some years ago, a friend brought me to In-N-Out Burger near San Francisco and I fell in love with the amazing cheeseburger. I'm not a fan of hamburgers but the one I ate really blew my mind. I remember how the soft and fluffy buns were toasted at the stove until the sides were slightly charred and the patty was so soft, the entire burger melted in my mouth. The fries were crispy with a buttery taste, they were the best I've ever had.

At that time, the outlet at San Rafael was teeming with people waiting for their numbers to be called. The hive of energy made our burger joints in Singapore pale in comparison. My first experience at In-N-Out was a most memorable one. Even though I had been back to USA many times after that, I didn't get a chance to savour another In-N-Out burger.

So when I walked by this outlet at Costa Mesa on Saturday morning, I went right in. It was early and I was the 8th customer. I ordered the set meal and waited for my number to be called. The kitchen staff appeared to be newcomers who looked quite lost and were reprimanded by the manager more than once. As I watched them assembling the burgers, I noticed they lacked the skill and energy. And they didn't toast the buns!

To me, toasting the buns had given the burgers that special edge over the garden variety burgers out there. You should see my disappointed face when I collected my order. 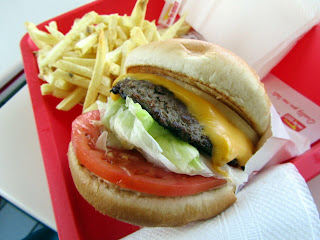 To be fair, the bun was very soft, still miles ahead of the competition. The patty was so tender and juicy, every bite was satisfying. It would have been better if the buns were toasted though. The fries didn't fare too well. Though they were freshly fried, some weren't very crispy. More importantly, they have lost that buttery taste I remember so well. I suspect they use a healthier type of oil here because of the clientele. The one I went to in San Rafael was filled with hungry truck drivers whereas this one in Orange County caters to families.

I shouldn't have ordered the fries because I ended up thowing away most of it. After the heavy breakfast, I went shopping at South Coast Plaza for the next 4 hours. 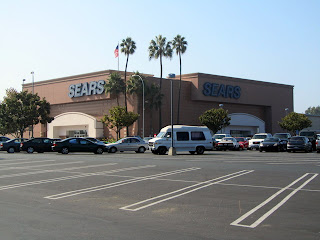 Everything in USA, from the meals to hotel rooms, is larger than normal. It is no surprise that South Coast Plaza is so sprawling that in the 2 days I was there, I couldn't cover all the stores. I must have walked for miles and miles before I realised it was almost 3pm. Most of the restaurants have stopped serving lunch, so I ended up at ZCafe again.

The chicken salad I ordered was a mistake. The grilled chicken breast was dry, tough, overly charred and horribly bitter. I decided against sending it back and ate up the greens instead. 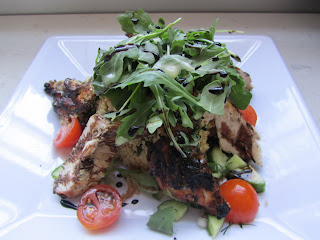 From ZCafe, I could see Hamamori nearby. Now, according to a food critic (forgotten his name), this restaurant is a gem and yet to be discovered by foodies. For two days, I had arrived too late for lunch as they close at 2.30pm. I was so determined to dine here before I leave LA, I hung around the mall for 2 more hours. 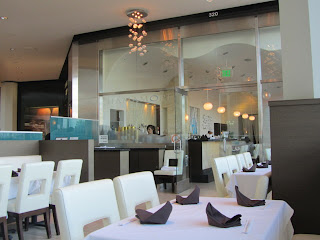 I was one of the first to arrive when the restaurant reopened at 5pm. There are so many dishes on the menu that I wanted to try but how much can I eat? I went for an appetiser and a sushi platter.

The complimentary miso soup and salad were a pleasant surprise. 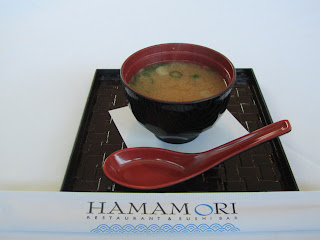 The miso soup was chockful of goodies like fresh mushrooms, onions and even small diced sweet potato. It was really delicious. 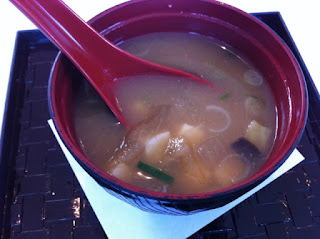 The humble looking green salad, drenched in a zesty dressing with a hint of tahini, was surprisingly good. It was such a pleasure to eat garden-fresh produce that is so lacking in Singapore (cos we import everything), I savoured every bite of the sweet carrot and crispy greens. The chef is really a genius to add candied cashew and fresh raspberries into the salad which really made the salad outstanding. 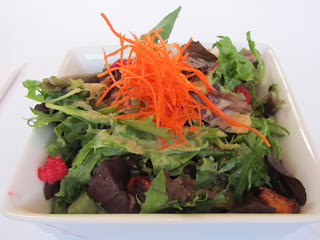 After such a great start, I was really excited when the Appetizer Trio arrived. 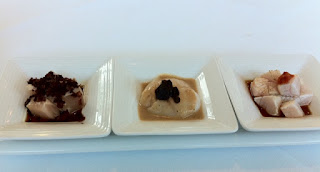 I came here because of the chef's ingenuity in giving a new twist to traditional Japanese cuisine. The seared scallop with truffle-infused Saikyo miso and sliced truffle (below) is an outstanding example. Needless to say, it was my favourite that night. 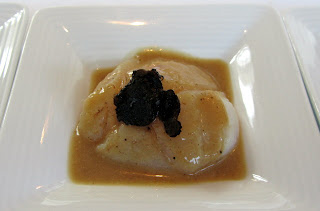 The albacore (type of tuna) with crispy maui onion was another winner. 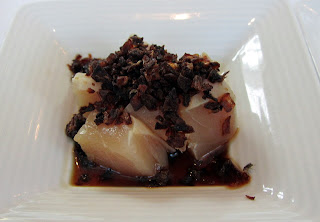 Seared hamachi (yellowtail) paired with Kanzuri chilli paste which gave a kick to the half-raw fish. 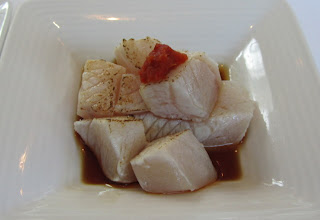 My main meal - sushi combination - was fresh and satisfying. 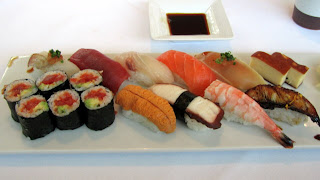 I particularly enjoyed the 6 pieces of spicy tuna roll. 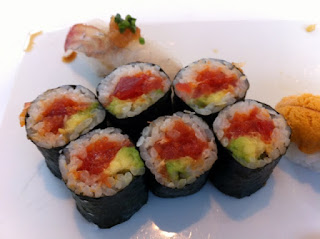 The most outstanding sushi must be the largest piece of uni (sea urchin) I had ever eaten. It was so amazing that I could really enjoy the unique and complex flavour that only the freshest uni can bring. The sweet, luscious and so fragant (even more so that the truffle) taste make one cannot imagine that it is raw and harvested from a spiky sea creature. 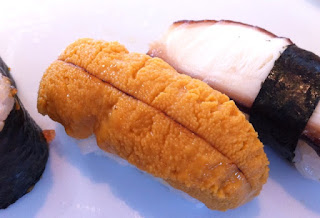 Naturally, I left Hamamori feeling extremely satiated and pleased. I wish I could return there again to savour the rest of their hot meals too.

After indulging in a good dinner, I skipped breakfast the next morning and headed to Balboa Island. The island is rather touristy with lots of cafes filled with people having the typical American Brunch.

While walking near the beach, the wonderful smell of grilled meat wafted in my direction. It was a cart selling Mexican food. 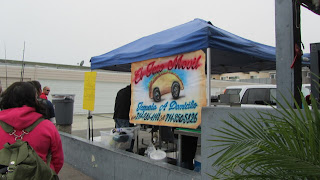 The spicy pork looked really good, so I ordered 2 tacos. 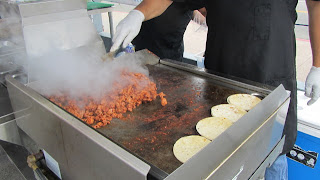 They were the best tacos I've ever had! The stall owners could barely speak English but they sure know how to make the best Mexican food. The 2 tacos only cost me US$3. 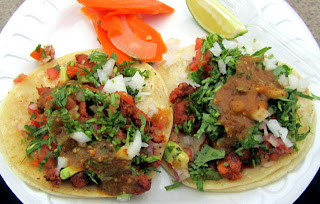 Having heard so much about Balboa Island's frozen chocolate banana, I had to try one. Honestly, it was nothing fantastic. Just take a frozen banana, dip in molten chocolate and sprinkle with nuts. It cost me US$3.50, more than my taco lunch! 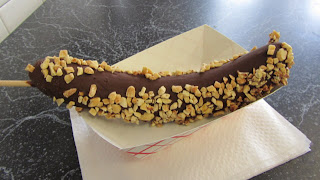 To round off the trip, I had Peruvian dinner at Inka Grill, a cosy restaurant just across our hotel. It was a cold day, probably as cold as it can get in LA and I was looking out for something spicy to warm me up. I'm glad I didn't end up choosing Wernerschnitzel (hotdogs), Subway or Del Tacos (not taco again for dinner!) because Peruvian food is good! 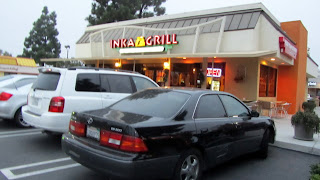 What is Peruvian food anyway? I'm not sure but somehow the dishes I ordered turned out to be rather Asian. The appetiser, fried shrimp in a light batter, was very tasty. After the bad experience with charred chicken, I avoided chicken altogether. It's difficult to go wrong with shrimp as long as they are fresh. These were fresh and they went so well with the onion salad (dressed in vinegar and cilantro) and panfried potato. 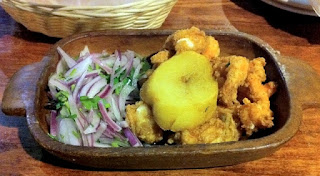 The main dish, a seafood stew cooked in garlic and onion were surprisingly good. There were chunks of boiled tapioca which I liked very much. The rice is the long grain type that we use back home. The seafood was very fresh and the green gravy tasted like a lightly spiced curry. 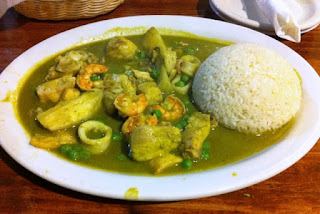 To wash everything down, I had a glass of sangria which came with diced apple inside. Again, I was so impressed with how crispy the apple was. Sadly, by the time apples travel across the world to get to our supermarket shelves, they have already lost that crunch. 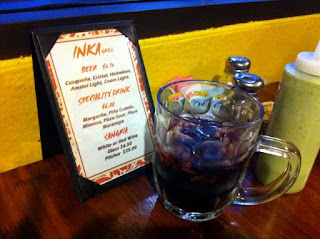 For dinner one night, I had nachos which was served on a huge plate filled with diced chicken, mashed beans, guacamole and tomato salsa and melted cheese. 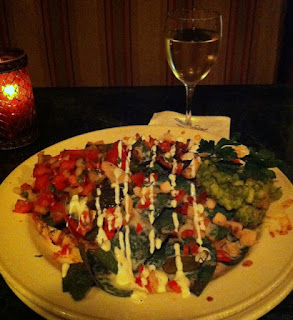 Those Japanese dishes are to die for!!

Indeed. I saw other people eating tempura and other yummy stuff and felt like stealing their food. :-)

The uni is the thing to die for. So big, so fat. I cld eat it in one gulp!

That's a lot of delicious food!

I've just finished my lunch, but your pics have made me hungry all over again!