Shantou City must have undergone tremendous amount of development in the last decade. The roads leading to the city are wide and new and public toilets are conveniently located in the major street corners. Public transportation is very cheap. A 20-minute ferry ride to the nearby Que Shi Island only cost RMB1 (20cents) while a bus ride costs between RMB1-5 per person.
Taxi drivers, on the other hand, seem to try their luck. We paid RMB100 (S$20) for a 30-minute ride to the terminal (below) to catch a ferry to Nan Ao Island. The bus fare for the same journey, we later found out, was only RMB5 (S$1) per person. 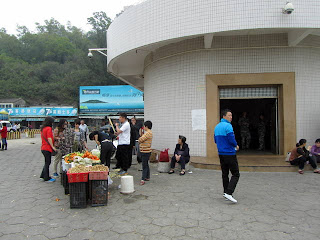 The ferry fare was so cheap but my jaws dropped when I laid eyes on the battered vessel. It looked like it had survived World War 1! 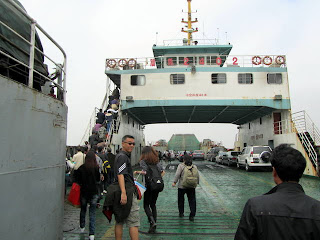 And it was just amazing how this old vessel could pack in so many cars and people!

During the 40-minute journey across the sea, many passengers were chain-smoking and milling around on the deck. The young lady sitting across me began to puke into a plastic bag when we were out in the sea.

Glancing at the torn and tattered life vests that were spilling out of the cabinets under the seats, I could only pray that the ferry would bring us to shore without any incident. 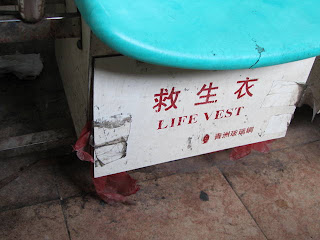 So it was with great relief when Nan Ao Island came into view. The passengers started scrambling down the steps and shoved their way to the front of the deck. 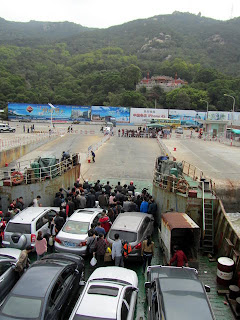 The moment we stumbled out of the gates of the terminal, several cab drivers made a beeline for us. After some haggling, we struck a deal with one who promised to bring us to the top 5 scenic spots for RMB300 (S$60).

He turned out to be a friendly chap who dispensed relevant information (in Teochew) when he felt like it. Even though it is a large island with a stunning coastline, the rocky interior makes for a hostile living environment. That probably explains why the population is only 70,000 for an island that size (130 sq km).

First stop was to see the Song Well that used to provide emperors, ministers, soldiers and their horses with drinking water. 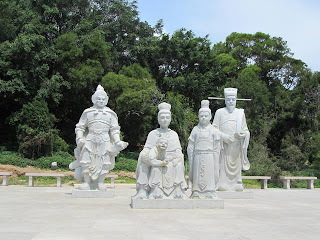 Honestly, I was more fascinated with the little kid who was running around the garden with a puppy. 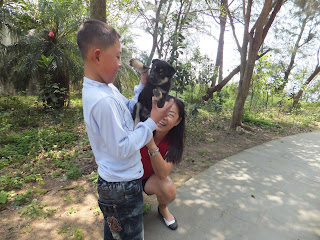 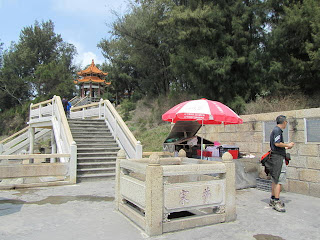 As you can see, the three wells have a history that dates back to the year 1276. Over time, the wells have sunk into the sands of the shore. Today, only one remains and is still producing fresh water. 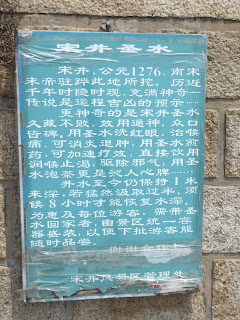 When asked to recommend good food in Nan Ao, the cab driver said, "Seafood and more seafood". It is no surprise we ended up at a seafood restaurant for lunch. 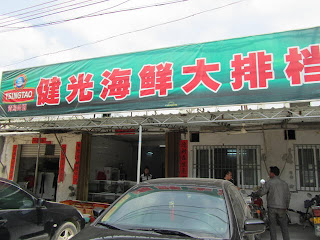 The fishball and seaweed soup was simple but nice. 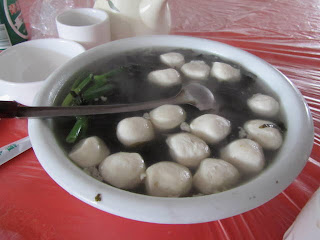 The mantis shrimp proved to be a disappointment while the bamboo clams were good. 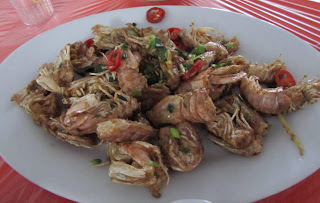 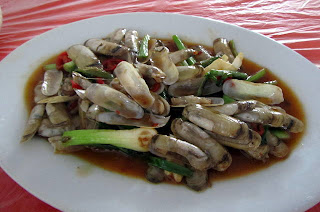 The most outstanding dish was the 'dragon beard' seaweed cooked with minced meat and mushrooms. 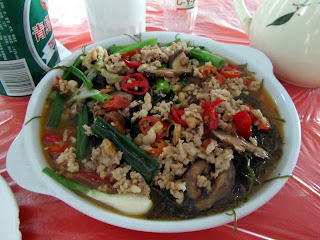 Thanks to the unique climate and untainted waters, the seaweed farming industry here is a thriving one, with Japan being the main customer. The dragon beard seaweed has such a unique crunch and texture, I could see why the Japanese are enamoured with it. 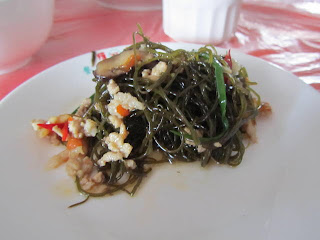 Everywhere we went, we saw freshly harvested seaweed being laid out to dry - along the sidewalks, on the roads and seashore. Now I know why seaweed often tastes gritty. 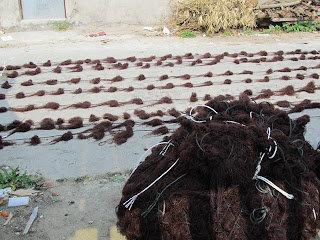 As we traveled along the coast, we could see seaweed farms stretching for miles and miles across the sea. 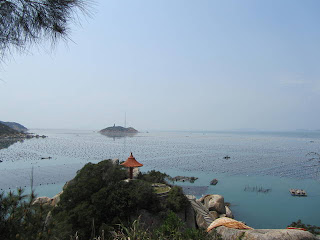 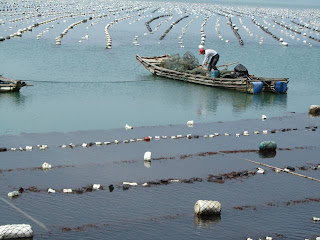 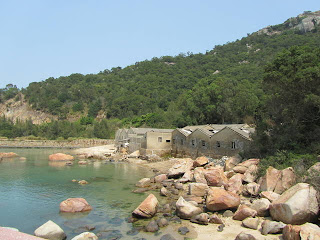 During summer, the white sandy beaches become packed with holiday makers from the mainland. 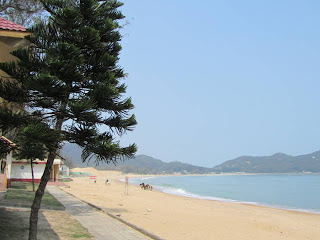 The chalets look like they need refurbishment and a new coat of paint. 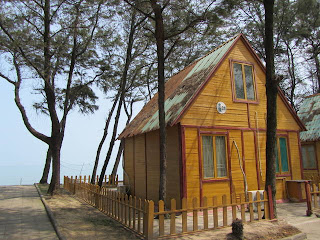 I hope they would correct the spelling mistake too. 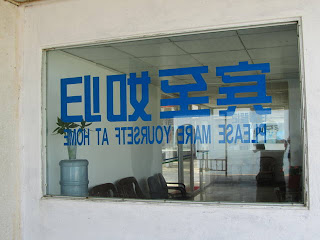 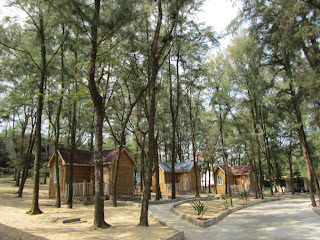 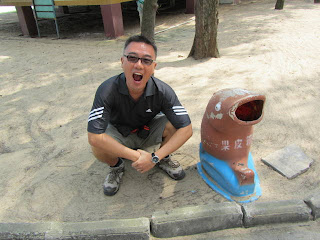 With more than 50 areas on the island containing cultural relics and places of historical interest, we could only afford to visit the more significant ones such as the General Mansion of Army. 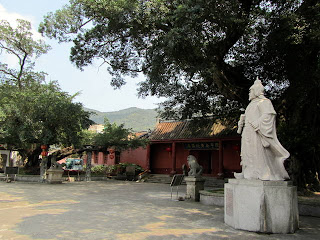 There are more than 30 temples here, so the driver probably felt that he should at least show us one. This beautiful temple reminded me of the one we had in our village where I grew up in. 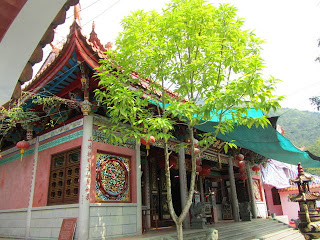 The driver sent us back to the terminal where we caught one of the last ferries of the day. This time, we were lucky to board a younger and cleaner one. The lady who vomitted earlier was on board the same ferry. This time, she didn't get sick at all.
Posted by Blur Ting at 23:36

Ugh...it reminded me of taking the half-an-hour ferry to Bali from Java (and back). I can't stand seeing waves. I was fine the way back from Bali to Java 'coz I closed my eyes the entire time.

What made you go to Shantou Ting?

I was chatting with a Chinese tourist while waiting for a flight out of Siem Reap. When he heard my ancestors were from Shantou, he said it is one of the more beautiful places he had been to in China.

Hence when Jetstar ran a promotion to Shantou, I jumped on the opportunity. I've only been to Shanghai several times but never thought of visiting other areas in China, so I thought this would be a good start.

Shantou is a very prosperous city today. It must have changed a lot since the last time my late granny went back to visit some 20 years ago.

1276? Wow, that's a long time ago!
You both do some fun and interesting things together. Glad the boat made it!

ah.. icic. It sounds like a very nice place! Love all the street food.. :)

It is appropriate time to make some plans for the longer term and it's time to be
happy. I have learn this put up and if I could I desire to suggest you some attention-grabbing things or
advice. Maybe you could write next articles regarding this article.
I desire to learn even more things approximately it!