"One of the best feelings is sleeping under two layers of comforters in a cosy bed and drifting off to sleep anticipating a new day in a new city. I love travelling, and looking back, I have no regrets about spending our savings on family trips around the world. That is one thing Hub and I did right, I think, foregoing the fancy houses and cars for new places and experiences with our kids."

I absolutely agree with her. I'll happily forgo expensive bags and shoes for a trip to somewhere, anywhere. Traveling opens up a whole new world of experiences. Not to mention, we meet so many people along the way.

During our stay at Casa Mazzola, we met this nice couple from Israel. I was so thrilled to learn that they're growers and exporters of persimmons, the same ones we buy from our supermarkets! They too, have traveled around the world and it was never boring chatting with them. 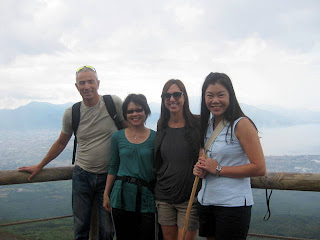 They were driving to Mt Vesuvius one morning and offered us a ride. I would never have the courage to drive along the narrow roads here. Even our cool, macho Israeli friend claims it was challenging though he never showed any signs of stress throughout the long drive that day.
Mt Vesuvius is the volcano that erupted on August 24 A.D. 79 blanketing the towns and thousands of residents of Pompeii, Stabiae, and Herculaneum with ash, stones and pumice. Pompeii was buried 10' deep, while Herculaneum was buried under 75' of ash. Today, Vesuvius is still one of the world's most dangerous volcanoes. The last major eruption was in 1944.  Today's population around Mt. Vesuvius is about 3 million, which is potentially catastrophic in the area of such an active volcano. 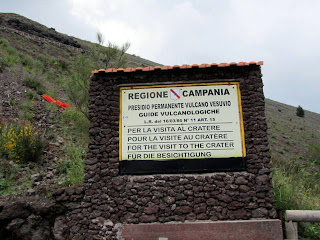 The height of the main cone has been constantly changed by eruptions but is currently 1,281 m (4,203 ft). As you can imagine, it was quite a drive up the long and winding road. 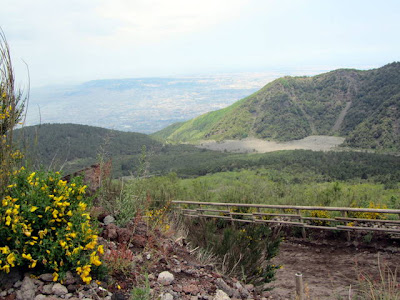 The slopes of the mountain are scarred by lava flows but are heavily vegetated, with scrub and forest at higher altitudes. 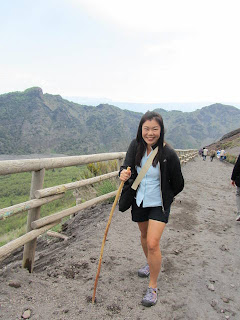 From the carpark, we paid a park entrance fee of 6.5 euro and walked 500m uphill to the crater. Our calves were aching badly from the 2-hour descent at Nocelle the day before, so when someone offered me a walking stick, I accepted gratefully as it made walking up the steep path covered in black dust and loose rock easier.

At the top of the volcano is a crater rim that affords a view into the crater that still fumes slightly.  While the weather was sunny on the way up, we could see clouds hanging just above the crater. In fact, it began to drizzle as we walked under the clouds. 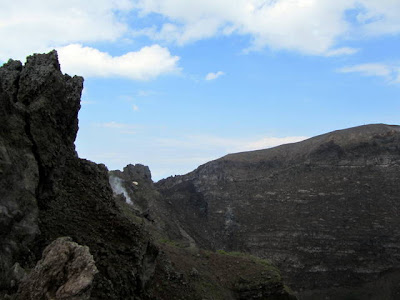 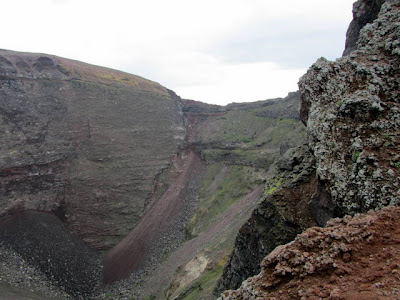 As soon as we left the crater, it was sunny again. From the top, we caught a panoramic view of the Bay of Naples and Sorrento shimmering in the morning sun below. It was quite a sight to behold.
No trip to Mt Vesuvius is complete without a visit to the destroyed cities of Pompeii or Herculaneum. Both these cities, buried and forgotten for 1600 years, were discovered only after the volcano erupted and killed another 4000 unsuspecting inhabitants in 1631.It would take another 300 years for the excavations to reveal the story of Pompeii and Herculaneum. 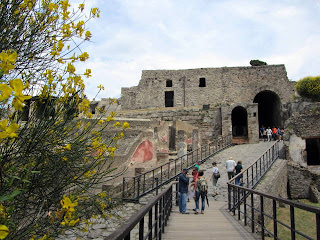 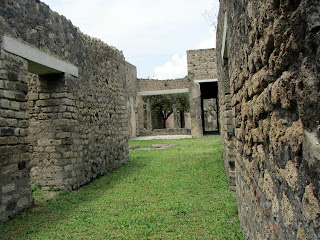 Pompeii is one of the most significant proofs of Roman civilisation as most of the houses, artifacts and art were intact. The ruins give us a glimpse of what the daily life was like during their time. We didn't engage any guides that day, so all we could do was see and imagine. If you are interested, this website provides good information about the City of Pompeii. 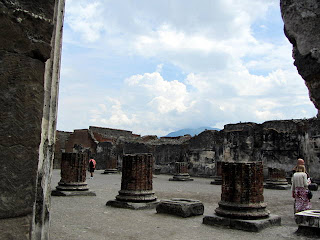 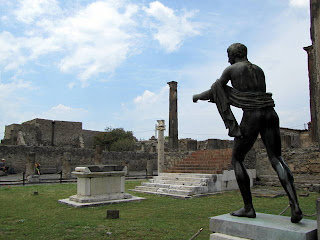 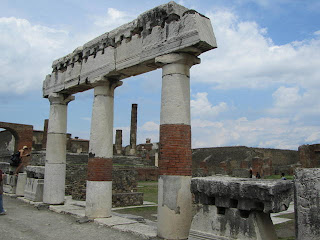 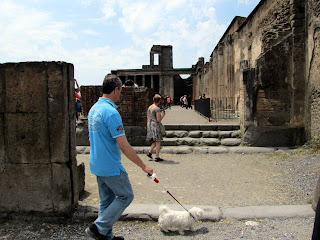 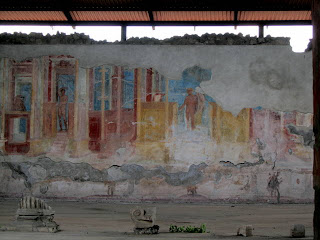 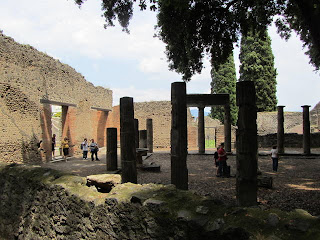 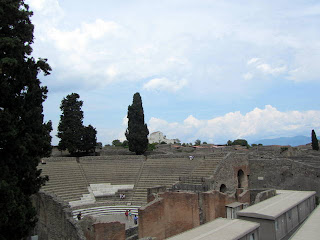 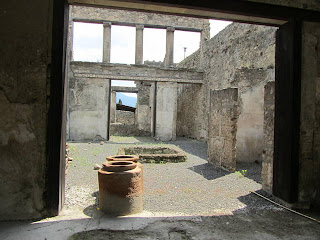 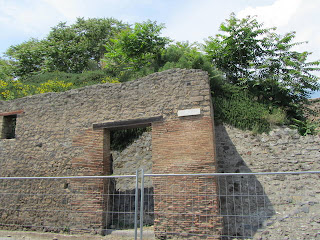 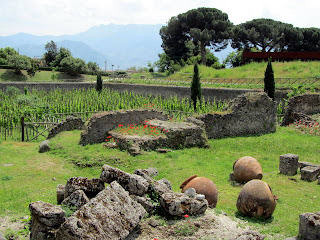 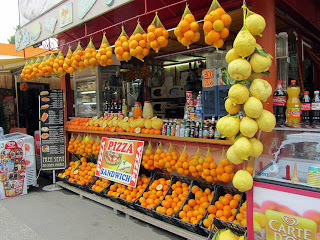 The best way to get back to Sorrento is by the Circumvesuviana train. But first, we took a quick tour around the city.

The place was teeming with tourists, so there are no lack of of shops selling tacky souvenirs. Our local Italian friend told us these huge lemons are only good for one thing - that is to impress the tourists. The rind is at least an inch thick, so you're better off buying the regular lemons which are jucier and cheaper. 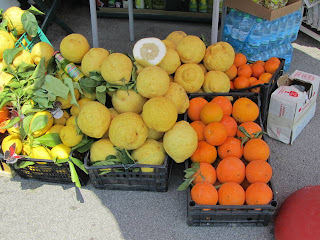 I was appalled to see most stalls selling China-made plastic imitations of Pompeii ruins. 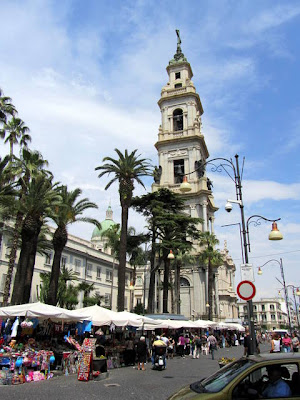 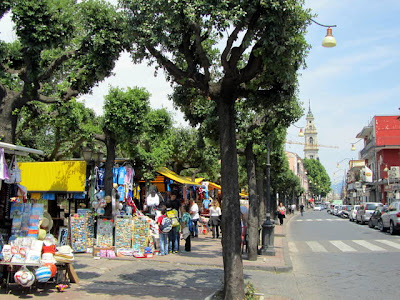 I only spotted one selling authentic Italian food but I wouldn't get my fix from these tourist traps. 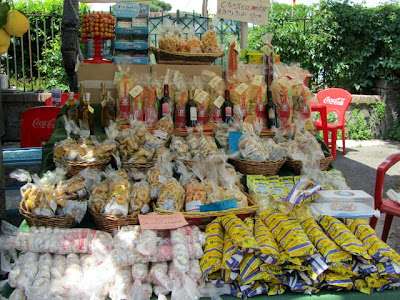 We stopped by for ice cream and pastries at this shop. A group of local nuns were eating ice cream, so it can't be too bad. 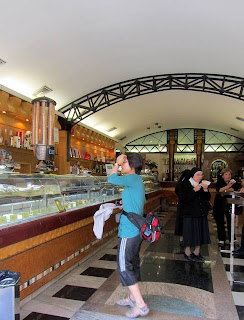 Just as we were leaving for the train station, we stopped to have a chat with this restaurant owner and his beautiful dog called Amos. 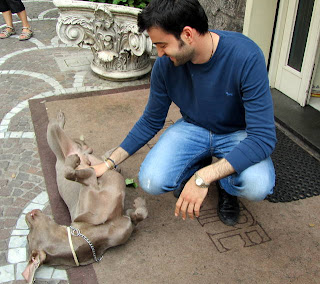 At 9 months old, Amos is already a big pup. According to the owner, Amos is from Sicily and there is only one of him around here. 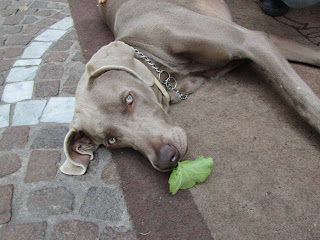 Nice! Now I must find a way to get to Pompeii someday somehow :)

Wow.. you really did a lot of walking this trip!

Yup, walk walk walk. Sometimes with a 10kg backpack on my back.

Hiya! I simply would like to give an enormous thumbs up for the good data you may have right here on this post.
I can be coming again to your weblog for more soon.

Good day! I simply want to give an enormous thumbs up for the nice information you will
have right here on this post. I might be coming again to your weblog for more soon.


Here is my web-site - seohyun and yoona snsd

Whats up! I simply would like to give an enormous thumbs up for
the great data you will have here on this post. I will be coming back to your blog for more soon.

Hi! I just wanted to ask if you ever have any problems with hackers?
My last blog (wordpress) was hacked and I ended up losing many months of hard work due to no data
backup. Do you have any solutions to prevent hackers?

Wow that was strange. I just wrote an extremely long comment but after I clicked submit my comment
didn't appear. Grrrr... well I'm not writing all that
over again. Anyhow, just wanted to say excellent blog!

Stunning story there. What happened after? Thanks!

eToro is the #1 forex trading platform for newbie and established traders.