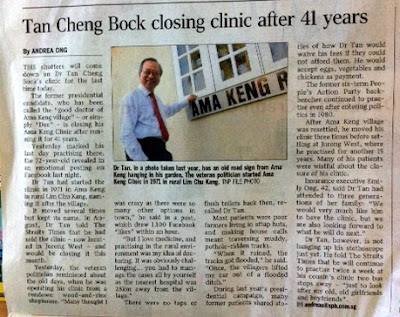 When I read that the shutters of Ama Keng Clinic will come down for the last time today, a whole lot of memories came flooding back.

See, Dr Tan Cheng Bock was then our family doctor. There was a lady Doctor Ong who operated a clinic nearby but most of the villagers prefered Dr Tan. In his facebook page, he talked about the village kids that he was so fond of. We were one of the village kids.

Even though conditions in the village weren't good, people were friendly and self sufficient. We led a simple but happy life. The name Ama Keng came about because of the Ama Keng Chinese Temple built in 1900 to worship the holy mother, a goddess of peace and happiness. Ama means "grandmother" and "keng" refers to temple.

Ama Keng Temple was the major landmark of the village. Even the primary school we went to was called Ama Keng Primary School. I remember the main Ama Keng Road as a bustling place with shops, a small market and a police station. On nights when the temple staged Teochew operas, Ama Keng Road became even livelier like a carnival ground.

By the time I got to secondary school in the city, Ama Keng became the butt of jokes amongst our more sophisticated schoolmates. As a teenager, I hated it and had always wished we could move to the city. My wish was finally granted. The day came when I was in my late teens. I couldn't understand why my parents were reluctant to leave. Now I wish I were living in the village again.

The story of Ama Keng Clinic.
Today is my last day of medical practice in Ama Keng Clinic. It is indeed very sad to part with my clinic which I started in 1971, 41 years ago. I named my clinic after the village Ama Keng. This far away village was 28km from town, along Lim Chu Kang road.

My clinic was a run down shophouse made of wooden planks and zinc roof. Many thought l was crazy as there were so many other options in town. But I love medicine and practicing in the rural environment was my idea of doctoring. It was obviously challenging as you had to manage the cases all by yourself as the nearest hospital was 28km away from the village.

My patients were generally poor farmers growing vegetables and other crops, tendering to the chickens and a few pigs. Their homes were attap huts and the roads to the huts were laterite mud tracks with numerous pot holes. Making house calls to the sick in their homes involved crisscrossing these narrow tracks. When it rained the tracks got flooded. Once the villagers lifted my car out of a flooded ditch. The village children were incredible, I love them, full of fun and loved playing in the rain. They all love to carry my doctor’s bag.

Many homes did not have tap water. Water was from deep wells and water standpipes. So the villagers had to carry water buckets on their shoulders from these 2 sources. No flushing toilets, bucket system prevailed.

My medical fees were low yet some still cannot afford, so they pay me in kind like eggs, vegetables, and chickens. For those who cannot pay l waived the fees. They were very grateful. Over the years the villagers and l developed a special bond that money cannot buy… a deep trust and respect.

Then came resettlement. One day, we were told we had to move out because of comprehensive redevelopment of the area. It was devastating for many as they had no other skills except farming. Many villagers look to me for help for their resettlement problems. I obliged. I had to speak on their behalf on their housing problems and compensations. It was sad, seeing friends moving out of this village. We were one big family but we had to go separate ways. We were resettled to different parts of the island but primarily to Punggol, Bukit Panjang, Jurong West, Boon Lay and Chua Chu Kang.

I was resettled to Teck Whye but continued to practice under the name Ama Keng Clinic. The HDB practice was different from old Ama Keng. I moved 2 more times before moving to my present clinic at Jurong West where l practiced for another 15 long years.
Many old patients from old Ama Keng and staying far away continue to see me. My oldest patient is more than 100years old. She appeared in my facebook before and 4 generations of her family sees me today.

I have come to accept the fact that Ama Keng Clinic will finally close its door on 22nd Nov. 2012.
I want to thank all my patients for their faith in me.
Goodbye AMA KENG CLINIC.
Posted by Blur Ting at 00:55

You're so lucky to have grown up in kampong. My husband too grew up in the kampong. It is way more fun than growing up in town.

What an interesting life at kampung! You must miss your childhood time!

I really wish that Dr Tan is our president instead... O well.

he said https://www.dolabuy.ru/ click this link here now look at this website from this source high quality replica bags