Many people have the misconception that the diet in Korea is limited to kimchi and spicy meat. There is such a huge variety of food in Seoul city, one will be spoilt for choice. If you're not into Korean food, there are plenty of cafes selling sandwiches and western food. I spotted so many Starbucks and Coffee Bean & Tea Leaf outlets, I think the Koreans really love their coffee.

There are plenty of other local cafes too (which we prefer) which serves good coffee and breakfast. 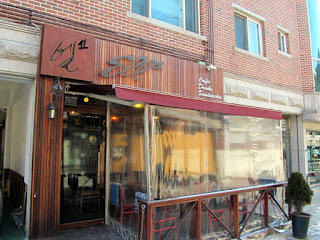 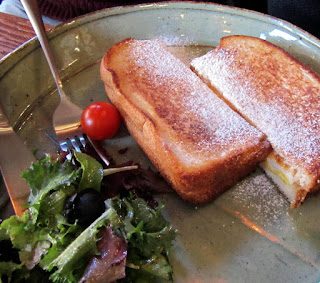 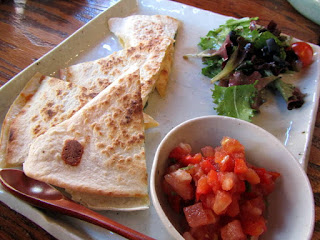 During winter, having a hot meal of ginseng chicken is most satisfying. It warms the body up though we have learned that the moment you step out of the toasty restaurant into the cold, all the warmth in the stomach disappears almost immediately. I wonder how the locals survive their cold winters! 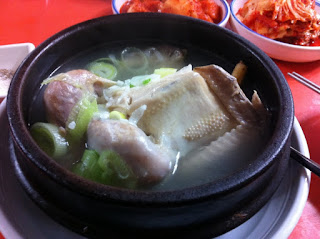 The Koreans eat raw fish and meat which they call 'hoe'. It is assumed that the tradition of eating hoe was introduced from China to Korea during the early Three Kingdoms Period (57 BC-668 AD). Here, the sliced fish is usually dipped in a sweet sauce and then wrapped in sesame leaf. I found the texture of the fish rather tough and chewy. The shellfish was worse. I'm not a fan of raw fish, so I couldn't appreciate this expensive platter at a dinner hosted by my business associates. 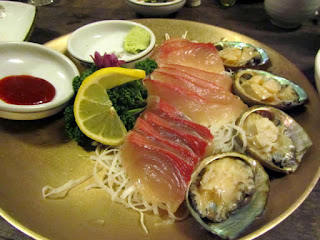 However, the Korean style beef tartare was surprisingly good. Served with thinly sliced pear, it had a very clean taste to it. In fact, the meat was smooth, well marinated with a springy texture making it very palatable. I was surprised to find myself enjoying raw beef. 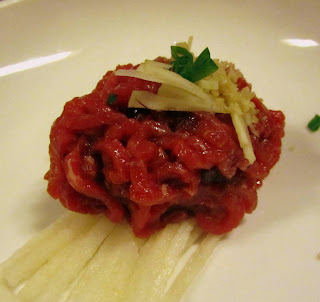 The food kept coming at this fancy Korean restaurant called Jinsadaek. Our host wanted all the oversea guests to sample a large array of traditional food which is mostly meaty. I felt sorry for one Italian guy amongst us who is vegetarian. The only thing he could eat was the salad below. In the end, the restaurant prepared a vegetarian bibimbap for him. He had bibimbap for lunch too. 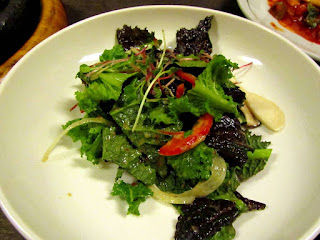 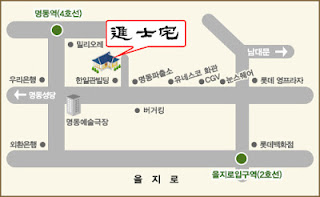 Other than the fancy business dinner, we sampled lots of local food in Seoul and Busan. CH wanted to try the sundae, the Korean blood sausage made using cow or pig's intestines stuffed with various things. It wasn't my favourite dish. 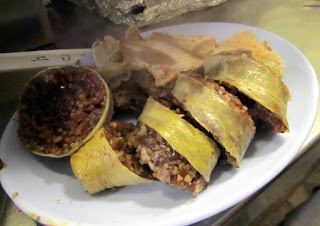 After a hard day's work, many Koreans unwind by going for beer and fried chicken. We saw groups of men and women in their office attires arriving quite late, probably looking for a place to keep warm after dinner. While waiting for our food to arrive, we were served a huge bowl of puff corn which was plain but strangely addictive.

We ordered two kinds of fried chicken. I like the garlic coated ones better and will eat this again when I return to Korea in future. 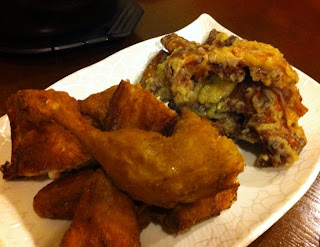 Since we were there for dinner, we ordered the steamed egg, spicy top shell salad and kimchi stew as well. 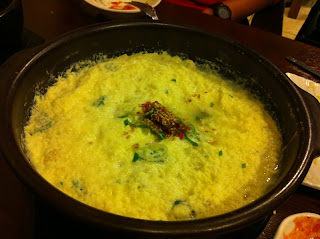 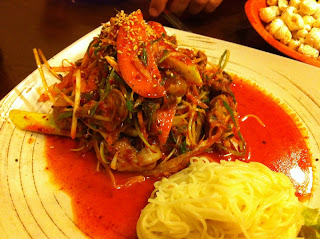 We also spent two days in Busan which is the second largest metropolis after Seoul. Being a port city, the cuisine here is slightly different. We had the famous Busan waeji gukbap (pork soup rice) upon arrival. 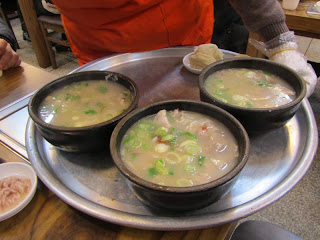 Located at the southeastern-most tip of Korean peninsula, Busan has the largest beach and longest river in Korea, hence it is famous for seafood. There are street-side stalls selling fried fish and spicy pig skin. 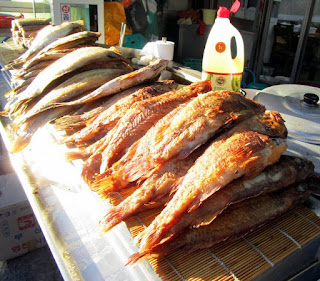 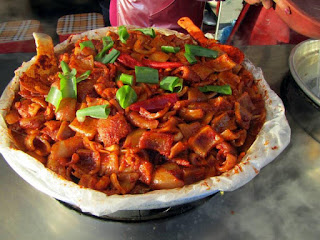 During the Korean War, Busan was the biggest refugee destination on the peninsula. People from all regions of Korea came there. Some of these refugees stayed and adapted and adjusted the recipes of their local specialties.

While looking for somewhere to have a quick lunch before heading back to Seoul, we came across a 40-year old Chinese restaurant near the train station. Since it has been around for so long, the food must be good. The dumplings did not disappoint in price (5,000 won -around $5- for a tray of 10 pieces) and taste. We rounded the meal with spicy seafood stew. 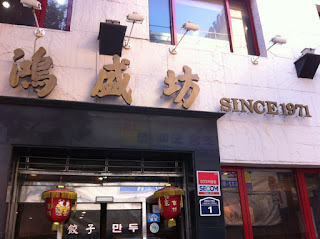 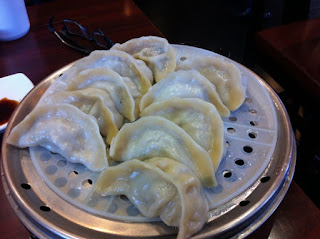 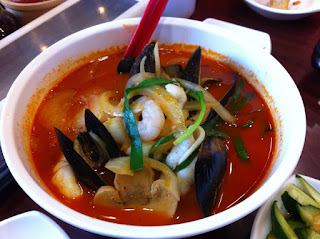 Our favourite snack in Busan was the hoddeok, a pancake filled with cinnamon brown sugar. The ones in Busan are special because they have a generous stuffing of mixed nuts in them. Each day, we joined the long lines just to get our hands on these freshly fried yummy pancakes. Oh, I miss my hoddeok! 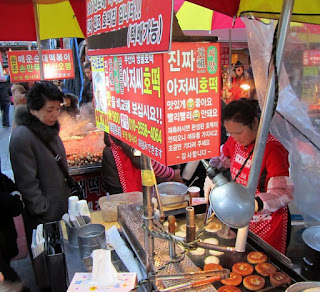 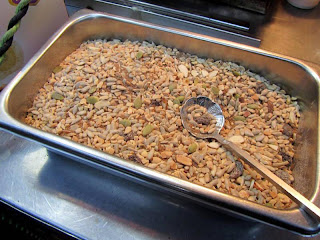 Oh my goodness... I think I will go there just to EAT this food!!

What is the name of that fancy meaty restaurant please?

NOOOOOOOOOOOOO...Seafood! I MISS seafood! Fresh seafoodddd he he he...R2 has a gag reflex whenever he sees seafood, esp. those that look "disgusting" (in his POV) like mussels hi hi...

Petunia - it is at JINSADAEK

Amel - You can travel to Norway easily? Lots of seafood there!

All these photos of food.... Are making me hungry right now!

I so love eating in Korea. I love everything here. Do feel the same way? Maybe we could follow each other on Bloglovin and/or GFC?