There was a time (not so long ago) when I was bitten by the travel bug. Maybe it was the lack of responsibilities (as we were living with my parents), I was jetting off to a new location every few months, sometimes alone but mostly with the kids or friends. My favourite traveling companion is CH because he's easy going and tolerant, he never barks at me or give me grief.

That intrepid spirit in me seemed to have abated lately. These days, I'm quite happy reminiscing instead of jumping on the next plane. This morning, I found myself thinking about a place.

I've visited Australia many times but the one city I find most fascinating is Darwin. Not Melbourne or Perth or even the Sunshine Coast, but Darwin! I know I'm weird but Darwin appeals to a nature lover like me.

It all started with the cheap airfare. Then as I was looking for a place to stay, I found Frogs Hollow and imagined falling asleep to a chorus of green tree frogs. I was sold!

Within a week, I was dragging CH along on our little adventure to Darwin, a vibrant destination renowned for its tropical climate and colourful characters. Apparently it has the most youthful population in Australia, which gives it a distinctly optimistic vibe.

That must be why I'm drawn to Darwin. I like places with good vibes! The all-year round balmy and sultry weather is also another plus of course. I like basking in the sun. 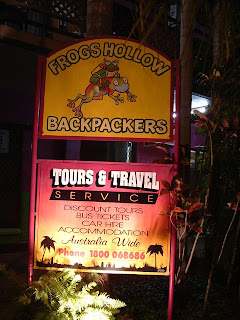 Frogs Hollow turned out to be a laid-back kind of hangout for backpackers. The facilities are basic. We spent our days exploring the city on foot and soaking in the pool at night. 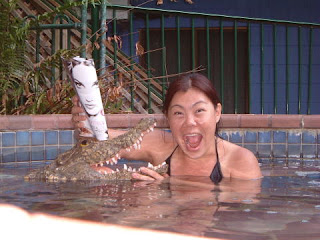 We jumped on the public bus several times to visit the open air markets scattered around the city. The Parap weekend market was bustling with stalls and activity when we arrived on a Saturday morning. It's the perfect destination to sample a smorgasbord of Asian dishes and pick up some locally made arts and crafts. 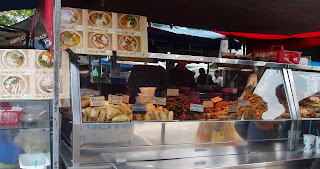 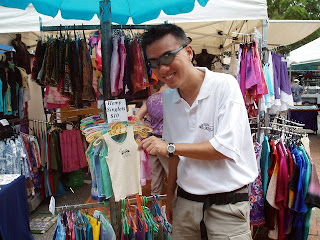 Locally designed clothes in all shapes and sizes, even miniature ones. 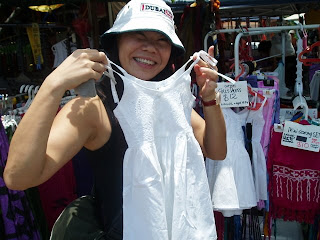 I bought this for my niece.

In the evenings, we immersed ourselves in the lively atmosphere of the Mindil Beach Sunset market. Besides a large variety of food, we were treated to performances from artists, a variety of street theatre and circus acts. 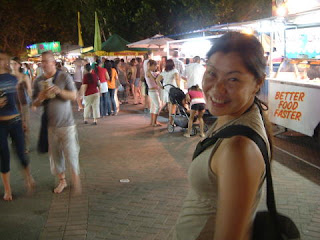 The city is easy to navigate on foot and there is no shortage of scenic areas and open spaces to explore. We walked through the Botanic Gardens and stopped for a picnic under the big shady trees. 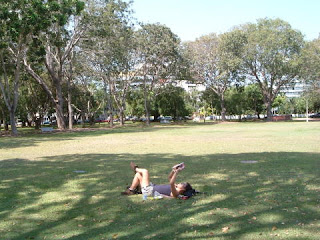 In the Tropical Summer, almost everything is done outside – eating, drinking, shopping and movie-going. When the sky darkened, we took at peek at the open air deckchair cinema but didn't want to spend precious time watching an old movie.

Right in the heart of Darwin at Doctors Gully, is Aquascene, where hundreds of fish come to shore at high tide to be fed by hand. We arrived at sunset to find mullets coming ashore to meet excited visitors armed with bread. 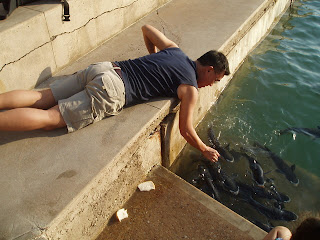 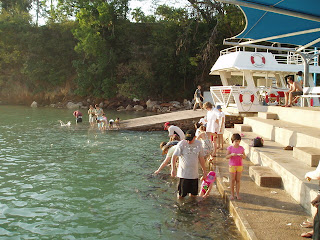 Visitors are allowed to wade into the water to touch and feed the fishes like mullet, catfish, rays, cod, diamond fish and parrot fish. 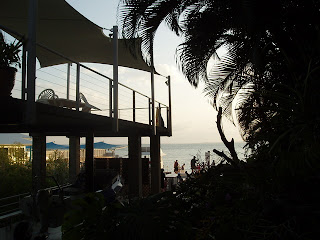 Darwin is also the gateway to some of Australia's best-known national parks and tropical outback landscapes. We took a day trip south of Darwin to explore Litchfield National Park, swim in crystal-clear waterholes, touch creepy animals and see many wild things. 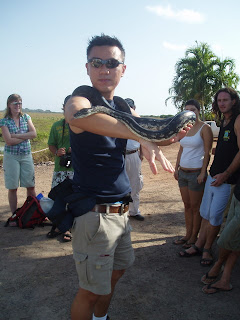 While CH was busy wrapping himself around snakes, I stood a mile away, fearing for my life. 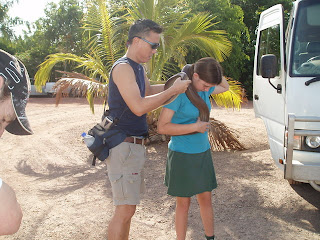 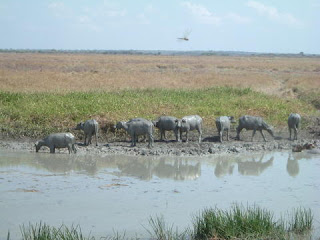 The water buffaloes covered themselves in mud to keep cool.

Our guide, who's half aboriginal, leapt out of the tour bus and returned with a large frilled lizard. As he passed it around happily, I was cowering with fear. I hate reptiles! 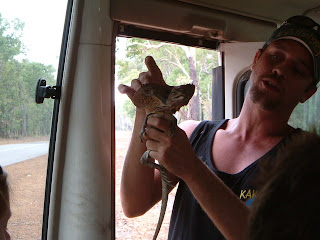 Despite my fear of reptiles, we had close encounters with numerous huge crocodiles that day. The murky river is just teeming with them on the prowl for food. 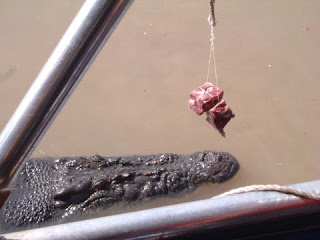 Luring the crocs with chunks of meat. 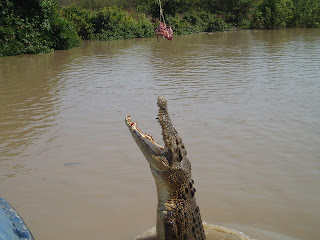 They may be big, but they can certainly leap! 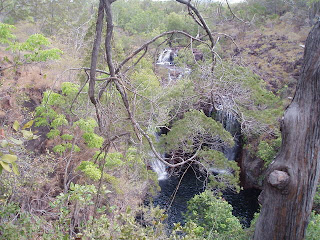 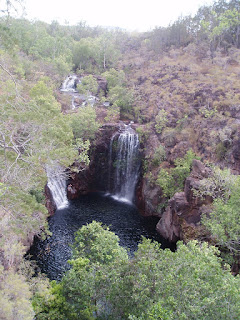 The Park’s traditional owners are the Wagait Aboriginal people, many of whom live in the area mostly surrounded by magnificent cliffs.

We had a refreshing swim in the crystal clear rock pools surrounded by lush greenery. 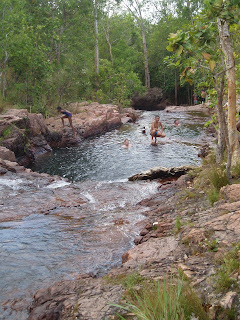 Along the way, we stopped by to admire the fascinating magnetic termite mounds endemic to this area. 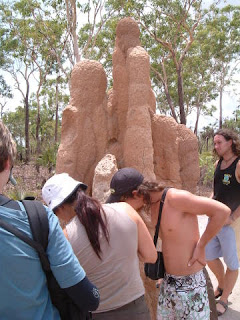 Magnetic termite mounds rising to as much as three metres or more in height are shaped like slabs rising out of the ground with their flat sides facing east and west. The thin ends are thus on a north-south axis, giving rise to the term "magnetic."

Rather than being influenced by magnetic forces, the mounds are actually so well crafted that their flat, broad sides, and hence the mounds themselves, do not catch too much heat from the sun during the hottest part of the day.

I still remember you squealing when he touched you with that lizard!

No wonder you loved it so much out there. Thanks for sharing.

Ohhh it sure sounded fun! :) And your smile in the pictures was fantastic!

You shld meet Betty Khoo who wrote the Cancer Cured Naturally books. She lived for years in Darwin, running an avocado farm, if I remember correctly! She loves hugging trees too :))

World - Yup, the place was laid back and natural. Just my cup of tea.

Auntie Lucia - I remember reading about her. She lived in Christmas Island for quite a long time. She was once an editor right?

Yes, the same person. Ex-Editor of Her World. Moved to Darwin to do organic farming. After a few years, moved to X'mas island. Hubby passed away. So came back to S'pore and wrote her books on curing CA naturally...

Hello! I simply wish to offer you a huge thumns up for the great information you've got here oon this post.