Last night, I dragged out two big storage boxes of old photographs at my parents' house. My friend had requested for the travel photos taken in Koh Samui and I didn't want to disappoint her.

As I pulled out one album after another, my nieces had a field day laughing at how tiny their cousins (YK and SK) once were. Some of the photos were indeed amusing. The ones with baby SK in a paperbag kept the little nieces giggling all night. 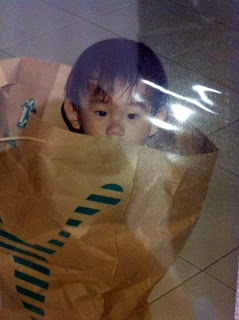 Then of course there were old photos of me and the ex, celebrating the kids' birthdays and so forth. I was so focused on my search for the Koh Samui photos (which I couldn't find in the end), I didn't have time to feel bitter when I saw images of the ex. To think that he once fought bitterly over the entire box of photos.

When the court gave me custody of the children, he was obviously very unhappy and demanded possession of these photos since I had the kids. While these were just as precious to me, the future was more important than the past, so I relented.

Years later, I found them chucked away in the store room of our matrimonial home. He had moved out, taking all his personal belongings except these boxes of memories. I was overjoyed to have them back, yet disappointed that he had not considered photos of his children valuable.

From the thousands of photos, CH had a glimpse of what my past was like. I wonder how he felt when he saw those photos.

As for me, it made me realise how quickly the boys have grown and how adorable they were as kids. Now I thank my lucky stars that their father had decided to abandon the photos.
Posted by Blur Ting at 18:06

Looking at old photos always makes me sad, especially when the persons in the pix are no longer around or no longer in one's life! Also, for those who remain in one's life -- alive n kicking -- it's always sad to see how time has ravaged them. Even those who are said to have aged well! :(

SK was soooo cute when he was a baby!

That's such a CUTE photo! Yeah, time flies and your boys are now SOOOOO tall! :-D

I'm glad to know you can get a hold of the albums, though it's understandable that you felt disappointed to know that your ex didn't bring them with him.

They may be just pictures...but so great to look back on. It is a blessing in a way that the ex left them...

Oh yes, pictures. I must remember to take many many pictures of my future kids, so that when I am old and when they are big, I have these wonderful memories to keep me happy.

SK looks really cute! How come he ended up inside paper bag? hahahhaa...
Thank god that ur ex left the box and your boys!