Yesterday's Great Eastern Women 10K run went without a hitch. We had perfect weather and the route was interesting. I even caught a glimpse of the National Day Parade Rehearsal along the way.

This year, being one of the early registrants for the race, I secured a nice race number - 64. On the night before the run, I realised it was the same number as last week's SPCA Run. What a coincidence!

I was gunning for a race time of 64 minutes but alas, it was beyond my reach. I managed to complete with a satisfactory timing.

The race saw a record 12,000 women runners. It was heartening to see a sea of enthusiastic women runners so early in the morning, and even more so to see their spouses and boyfriends turning up to support. Some actually ran from one spot to another just to capture their partner in action. One 'ang moh' guy even caught up with his girlfriend to give her a kiss at the 8km mark!

As I went there alone, I decided to complete the race quickly and make my way home as quickly as I could. For the first time, I moved to the front of the pack, hoping to pace myself with the good runners. Unfortunately, when the gun went off, I soon found myself being blocked by women who started walking just after running the first 100m.

Those who didn't train for the race shouldn't be at the front with the serious runners who had to dodge the walkers, wasting precious time and energy. The situation must have been much worse at the back.

On the positive side, there were ample water points and the race was well organised. Just after I sprinted across the finish line, I was rewarded with isotonic drink, banana, water, energy bar and a shiny gold finisher medal. I managed to get a fellow runner to take a photo of me before I scooted off. 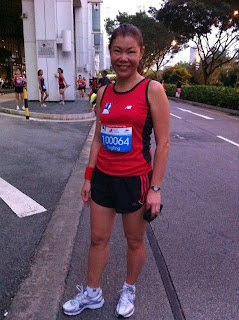 That is one good looking gal!!

I totally agree with Petunia!

Wow, top 20%! You got your groove back already!

Haha, not becos my timing was good. It's just not a very competitive race!

Actually I'm not amongst the top 20% afterall. There seem to be some changes to the results... still not so bad.

You are looking very good, Ting!