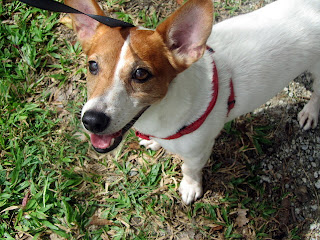 I wonder how Rusty chooses his friends or enemies. With his disproportionately large ego, he only picks on dogs that are many times larger than him.

One mottled brown mongrel down the road, in particular, seems to annoy the hell out of him. Honestly, that crazy dog annoys me as well. Whenever we walk by, he dashes around in the compound like a mad dog, trampling over plants and his smaller companion (a cute beige pup). Rusty would charge towards the gate, barking so furiously that soon trigger off a cacophony of barks from dogs in the neighbourhood.

The funny thing is, Rusty loves to tease that crazy dog and insists on visiting daily just to piss the fella off. Well, something terrible happened last night.

We were strolling by the dog's house and I was busy chatting with CH. Rusty suddenly rushed towards the gate and stuck his nose through the metal grille. Amidst the furious barking and snarling, I pulled the leash hard but Rusty wasn't moving. He was stuck.

That was when I realised the mongrel had his grip on Rusty's snout from the other side of the gate. I screamed at CH, "Get Rusty! The dog is biting him!"

CH rushed and pulled Rusty out. Luckily the big dog had released his grip and my poor doggie was bleeding from a deep cut on his snout. My heart broke when I saw his tears rolling down.

It must have hurt! Yet spunky little Rusty was still struggling to break free so that he could go on fighting. On the way home, he tried to vent his anger on every dog we met.

He spent the entire night licking his wound. It looked better this morning. He should be fine in a day or two. He is lucky to get away with a small wound this time. The last fight he got into almost killed him.
Posted by Blur Ting at 00:03

poooorrr honey Rusty! then again, he asked for it. though i'll still blow kisses from bukit panjang. silly boy. hehehehe.....

woah, that's a close call... dogs are like small children. They do not understand consequences until it is too late. Get well soon, Rusty and hopefully he has learnt his lessons!

He will never learn. Yesterday he wanted to go back and fight again!

Oh wow! Whatta spunky dog!! He's like Scrappy Doo "Lemme at him! Lemme at him!", and my Milo is like Scooby Doo "Help! Carry me!"

Poor rusty!
Anyway i'm really impressed with him! Such a brave small dog!

It has been said that any bettor must watch this,

Watch this now or quit placing bets on sports...