Rusty and I just came back from our morning walk. He has settled down comfortably here and is eating well. I always walk him after his morning feed, just before I leave for work. He really looks forward to that and would sit by the door waiting for me to bring out the leash.

Something terrible happened to him last week at the farm. One moment he was eating in the kitchen, the next moment mum found him lying on the porch with wounds all over his body. Apparently he had ran out the gate to join in a dog fight. The neighbourhood puppies that he used to play with are all grown up now and tower over him.

Rusty behaves like Napoleon sometimes. He forgets he's a tiny dog and has a big ego. There must be at least 10 dogs involved and Rusty limped home with a deep gash on his neck and marks all over his body.

He was sent to the vet for treatment immediately and came home 2 days later with stitches and antibiotics. It was then we decided he had to leave the farm for good and come stay with us.

He's fine now. The wounds have healed and he's scheduled for destitching this weekend. 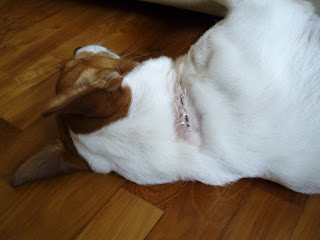 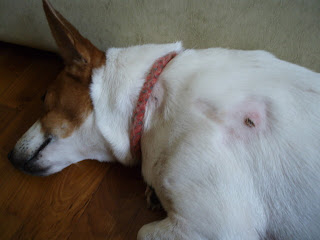 There was another tragedy. Our other mongrel Russell, who was a stray who came and stayed with us about 5 years ago, was found dead at the garage last week. We're not sure if he died of illness or was hit by a truck that came in to deliver goods. Poor Russell. He was never that close to us and Rusty used to bully him but still, we couldn't help but feel sad.
Posted by Blur Ting at 17:23

Rusty looks pretty good for a dog that's been in a fight with 10 other dogs. But yeah, it could have been REALLY worse.

And sorry to hear about Russell. But I'd like to think that coming in to live with you guys as a stray, at least you've given him a good five years. Which is a lot in dog years. :)

JY - The sad thing is, it is typical Jack Russell behavior. He never learns from all these. Only consolation is, he has stopped chasing cats.

Mooiness - You're right. It could have been worse. Then again, it wouldn't have happened if we brought him to our apartment earlier. Our other Mongrel Cookie is alot more disciplined. He tags along but never get into such troubles.

Heh, this Welshman who hosted us during our trip to North Eastern Thailand had a dog that lost half a tongue to a cobra. Imagine Rusty living there.

Rusty is always searching for snakes at the farm and had confronted cobras before, albeit small ones. He is simply fearless!

I like his fearless attitude. This guy is small in built. Lethal in attitude. But he must learn not to forget his built in critical situations :-)

Sorry to hear about Russell but my respect for Rusty has grown by tenfold. Imagine the little fellow taking on ten dogs! Hope the wounds heal soon though ...

Water - That's why it is difficult to walk him because he has a mind of his own and wants to go hunting everytime!

Nick - He's the only dog at home who never seems to get out of trouble. The money paid to the vet so far is incredible!

Oh no, poor Rusty! Looks like he learnt the hard way, ten against one is never a wise idea.

And I hope Russell is happy in doggie heaven. As Mooiness said, you gave him a good five years.

Oh dear...look at those wounds!!!! It must've been horrible when they were still fresh wounds! Ouch!

Eeek, sorry to hear about Rusty and Russell. Glad to to hear Rusty is healing well.