I can hardly believe it has been a year since we did our first practice run with Runner's Day. Last year, when we were truly infatuated with running, we signed up for several half marathons in Singapore, Thailand and Malaysia and that practice run was our first 21k. 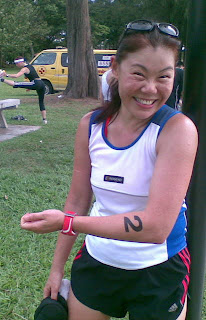 We went for another practice run yesterday organised by Runner's Day to prepare runners for the Singapore Marathon in early December. Though we are not participating in the marathon this year, we went for the practice anyway. Due to the lack of training, we did the 10k run this time.

We arrived early to secure a parking lot and hung around the beach while waiting for the other runners to arrive, craning our neck to look for my blogging pal, Water.

CH spotted a tall and slim lady in the distance who bore some resemblance but wasn't too sure. After gawking for a while, I went up to her. When she broke into her trademark smile, we knew we had found her.

We had missed her at several running events this year and finally, we were standing before her, chatting like old friends! She turned out to be really friendly, confident and inspiring. We ran together for the first 10km and she went on to finish another 10km. She's indeed a good runner.

Water is the second blogger pal I have met in person, the first being Amel who visited Singapore recently. I'll be meeting Flying Pink Elephants in London next month and I can't wait! Isn't it amazing? Who would have thought all this was possible 10 years ago!
Posted by Blur Ting at 18:22

If I hadn't worm my new shoes yesterday we could've done the 20km.

Oh really? But you didn't have your knee guards too... Anyway, I was happy to do the 10k. I don't want to stress my knee caps too much.

Yozz Ting & CH, thanks for running with me yesterday! The 10km was so much easier covered with someone chatting along the way!

OMG really? wow.. I think your next visit should be JP...so we can meet! HA HA HA!

Our pleasure. Anyway Blur was the one keeping you company... I can't chat and run like she can. Heck I don't even talk that much when I'm stationery!

Actually when I was in TJ and training for long distance running, one of the trainers said that the right way to jog and last long distance is when one can run and chat without panting.

Maybe you should chat more with Ting while you run?? :-)

YAAAAAAAAAAAYYYY SO MUCH FUN!!! I'd love to meet more blogger friends in the future he he he he he...

JY - I do hope to bring the kids to Japan one day. We'll certainly meet up with you and adorable Coffeebean!

Water - Chatting makes the run easier to complete and much more fun. I look forward to running again with you in future.

Hey, great to hear you met another blogging pal. It is amazing isn't it!

And roll on December when we get to step away from the internet and see each other in real life!

Amel - It's fun to come face to face with a blogger friend isn't it? I hope you get to meet many more in future too.

Hey World - Yes! We must eat and make merry!

NICE!!! :)
Now I'm over with the nervousness associating with meeting someone from the online world, I may go ahead and meet a few more myself too :)