Last night, there was a recipe brewing in my head. To be exact, it was Jamie Oliver's chickpea and leek soup. I read the recipe before bedtime. It's one of his favourite comfort food for cold wintry nights.

The first thing I did when I woke up was head to the kitchen. I had already soaked some dried chick peas the night before. All I did was sweat some garlic and leek in olive oil, toss in potatoes, chickpeas, chicken chunks and add water. I chucked in (Jamie's favourite word) some bits of ham from making pizza yesterday and just let the soup boil. It's boiling now as I write. 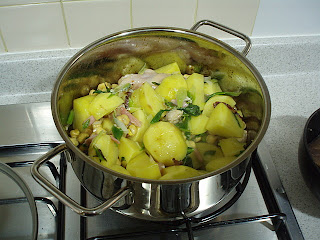 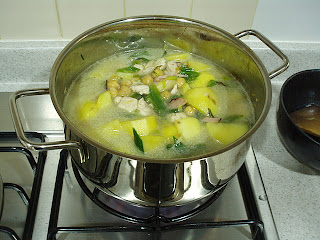 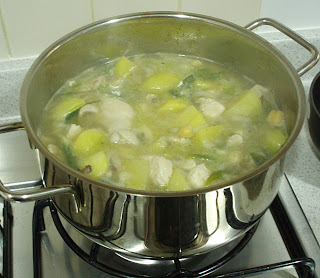 I've come to realise that cooking makes me feel accomplished. Some people paint or do yoga while other pursue their masters. Me? I simply chop up stuff in the kitchen and turn them into food. Doesn't matter if the food tastes good or not but that's my therapy.

Now that I have done my therapy for the day, I shall be heading to the office soon feeling so pleased with myself.
Posted by Blur Ting at 16:20

The soup looks cool. And I know what you mean about cooking being like therapy. Yesterday I made my own chicken rice for the first time ever without wifey's help and it felt great :D

I just came to sit down after making a big batch of veg and beef broth. I have to go out this afternoon, so I've put it in my slow cooker to cook while I'm out.

I can't meditate to save my life, but chopping veggies or stirring a pot - very "zen". :-)