I was so mad with Rusty last night, I wanted to leave him behind at the farm.

We went back for dinner at my parent's home. It was raining and the yard was muddy and wet. We kept Rusty indoors the whole night. He sat by the door, anxiously waiting to be let out. My heart went soft. Maybe he can go out for a little while, just to pee, I thought.

Despite the kids' protest, I let him out unleashed and followed behind. He bolted out and disappeared into the dark and muddy garden, together with Cookie and that black stray that often lead him astray. The garden is so huge, with rows and rows of orchids, there was no way we could go after him.

So we stayed along the side, calling out to him. We could hear them stomping through mud but he refused to heed our calls. Cookie, the more obedient one, surfaced several times to greet us before slinking back into the garden again. After a long time, Rusty ran out, showed himself and disappeared again.

It was frustrating. We shouted until we turned hoarse and decided to leave without him. At one stage, I even pretended to drive away, hoping that he would run after us but that trick didn't work.

We decided to leave with a heavy heart. His wounds are still abit raw and we were worried about infection or he might get into another fight. I told mum to bathe him and keep him indoors when he returns so that I could go pick him up on Monday morning.

I was angry with Rusty but the kids say we cannot blame him. He's a dog afterall. I should have known better. But a dog needs his friends too, I argued. CH thinks the farm must be like his parole.

As we were driving towards the gate, we saw him running around with the two dogs. SK opened the car door and he jumped right in, covered in mud. Cookie looked at us leaving with sad longing eyes. For the first time, I really felt sorry for Cookie. He had lost Russell, now even his best playmate Rusty is going away. 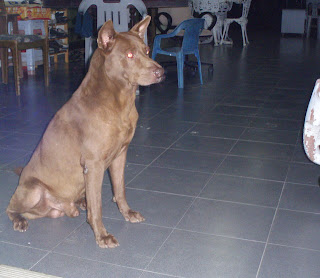 Jack Russel's have a mind of their own... and a big EGO LOL! But when he knew you were leaving for real...he jumped in...so I guess he knows when it's real and when he can get away with things! Smart little dudes....

Rusty sure does have a mind of his own!