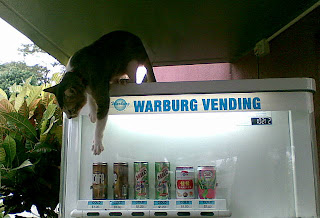 As we were walking Rusty outside the apartment, YK spotted a cat sleeping above the vending machine. As we approached with doggie in tow, it made a quick escape.

This brings to mind the pangram "The quick brown fox jumps over the lazy dog". We grew up very familiar with this sentence that contains all of the letters of the alphabet. As far back as my mum's era, it has been used to test typewriters and in other applications involving all of the letters in the English alphabet, because it is also a short coherent sentence.
Posted by Blur Ting at 01:52

oh yeah... and here i was wondering... where have i heard that sentence before???? LOL

So the Quick Brown Cat jumps over the Vending Machine?

That's actually a good picture, catching the cat in action :)

Love the photo. The cat looks like it's after a soda ;-)

This calls for a LOLCat caption:

'I can has cappucino?'