While walking Rusty early this morning, I stumbled upon a bird. This was no ordinary bird like a mynah or sparrow. It had black and striking red and green feathers. The only problem was, it was lying on its side, probably injured. There were several stray cats lurking nearby.

I stood and pondered what to do. Rusty didn't try to go near it but I did not have the courage to pick it up. Rusty was getting impatient and wanted to continue walking. I walked away feeling extremely guilt-ridden. How can I leave a dying bird there?

At this hour, the few bird shops nearby were not open for business yet. Then I spotted an old Malay man who looked like someone who knew what to do, so I tried my luck.

"Encik (uncle), there is a beautiful bird lying there but I dare not touch it."

Thank goodness, he asked me to show him the way. I led him there, he picked it up gently like an expert and said he'll take care of it.

I'm glad the bird is given a chance to live. It's really gorgeous, wish I had taken a photo.

Talking about photos, here are some pretty seed pods I found while walking Rusty one day. They belong to a large, fast growing, deciduous tree called Sterculia foetida or skunk tree which bears foul-smelling, purple-red blossoms . The name is derived from the Latin word Sterculius which means dung or manure and foetida which refers to the foul odour emitted by the tree when it is in bloom. 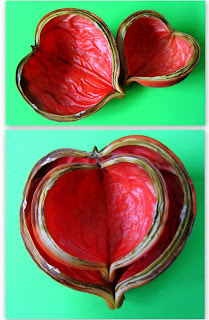 I cannot believe that's a seedpod. It looks like something that came out of Sinfonia's atelier.

Yes, they are gorgeous. I'm keeping them but as they age, they also lose the intense red colour.

Should've tried to shellac them.