This year, we celebrated Mother's Day by making mom a scrapbook. All her children and grandkids jumped in and contributed photos and mushy notes. Needless to say, mom was delighted to receive the gift of love from us.

Fueled by the success of this exercise, my sis-in-law proposed making one for Father's Day. Our reaction was less fervent. I was quick to declare that I'm not going to write any mushy stuff. It's not that we love our dad any less, but the thought of putting our admiration for him in words is rather overwhelming, for me at least. Years ago, I penned him a heartfelt message on his birthday and couldn't bear to look him in the eye after that.

Finding photos of dad poses another challenge for he's not the type who enjoys posing for the camera. As I was about the search through the family albums, mom pulled a tattered album out from the cupboard like a magician. 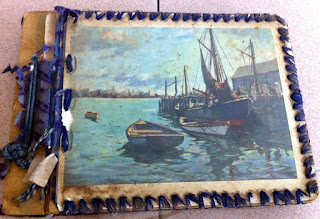 I had never seen this before. This album, which is filled with black and white prints of my parents and their classmates, was a project they did in school. It must be about 60 years old!  An old friend brought it here recently. Leafing through the album, mom pointed out some familiar faces and others who had already passed away.

The photos of my dad as a young lad blew me away. With his good looks, he could have been a star. According to mom, he was a quiet guy who only had his heart set on her!

This photo of him reminds me of SK. He must have been around SK's age. They have that same shy smile and physique. I'm quite curious to see my father's reaction when he receives the scrapbook. He's not the type who likes people to fuss over him but who knows, he might enjoy it. 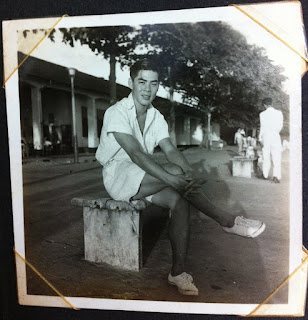 I found some old photos of me with chubby cheeks and chunky thighs. Black and white photos keep really well. In this photo, I must have been about three. Studio shots like these were popular then. 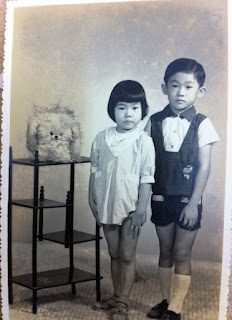 I'm sure deep inside he'd enjoy the gift of love he he he...walking down memory lane! :-D I was just going to say in your FB page that that certain pic of your dad really resembles SK ha ha ha ha ha...genes are quite strong hi hi...and you look CUTE! :-D

What a handsome young guy your dad was...! And I can definitely see SK and YOU in him! I bet he'll definitely appreciate it!

Oh my! CUTE! The guy is sooo droolworthy too!!

You were so cute when you were little! ;)