It has been a really hectic Sunday, one that started really early. As you see from the photo below, it was still dark when we arrived at Changi Convention Centre, the flag-off point for the REAL RUN 08. 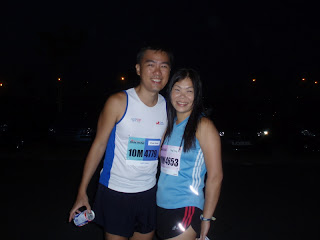 At 6.30am, cars were already filling up the 1,000+ parking lots. With more than an hour to spare, we sat by the coast, admiring the beautiful sunrise. 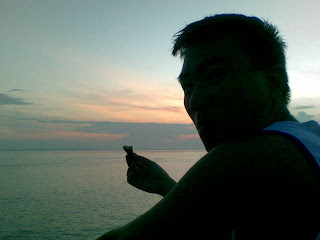 We had done the trial run a few weeks ago, so we're familiar with the running route but we had not anticipated such a big crowd. The other difference is the weather. While we enjoyed cool weather during the trial run, the sun was really harsh today.

We started off by running through a sandy trail about 4km long. I like running on the soft sand because it's kinder on my knees. I immediately felt the impact on my joints when we switched to pounding on the tarmac after that. We wove through the shady park and ran along the sandy beach before hitting the final stretch of the run. The last 3km of paved road, though flat, was also the most punishing.

By then, the sun was beating down relentlessly. It was all tarmac with no trees in sight. The water station strategically placed along the route was a life saver. At one point, I even started seeing psychedelic colours floating on the hot tarmac. At least the finishing point ahead wasn't an illusion.

Boy, was I glad we did the 10k instead of the 15k! Though we finished the run before 9am, we had to wait around for another hour before we could leave as the roads were closed to traffic. I went home, took a shower and sent SK for tuition and Rusty back to my parent's place. I had a rest there, picked SK up and now we're back home. All these rushing around has given me a headache.

I have one more run next week (Great Eastern Women's 10k run) followed by a 21k training run in November to round up this year's running calendar. Yah, I need a break.
Posted by Blur Ting at 00:07

Well done! Love the pictures. That's a very early start. I hope you are having a well earned break now!

Wow!
You got plenty of credits by waking up when it's so dark outside.
I couldn't have done it. No way.

I am glad I did not go. Haha .. Don't think I could make it. Hope to see you this coming Sunday lor. And can that guy in killer kilts please look out for me to take a most glam shot of me in the most unglam state?